Non-identical Twins For Data Storage of the Future 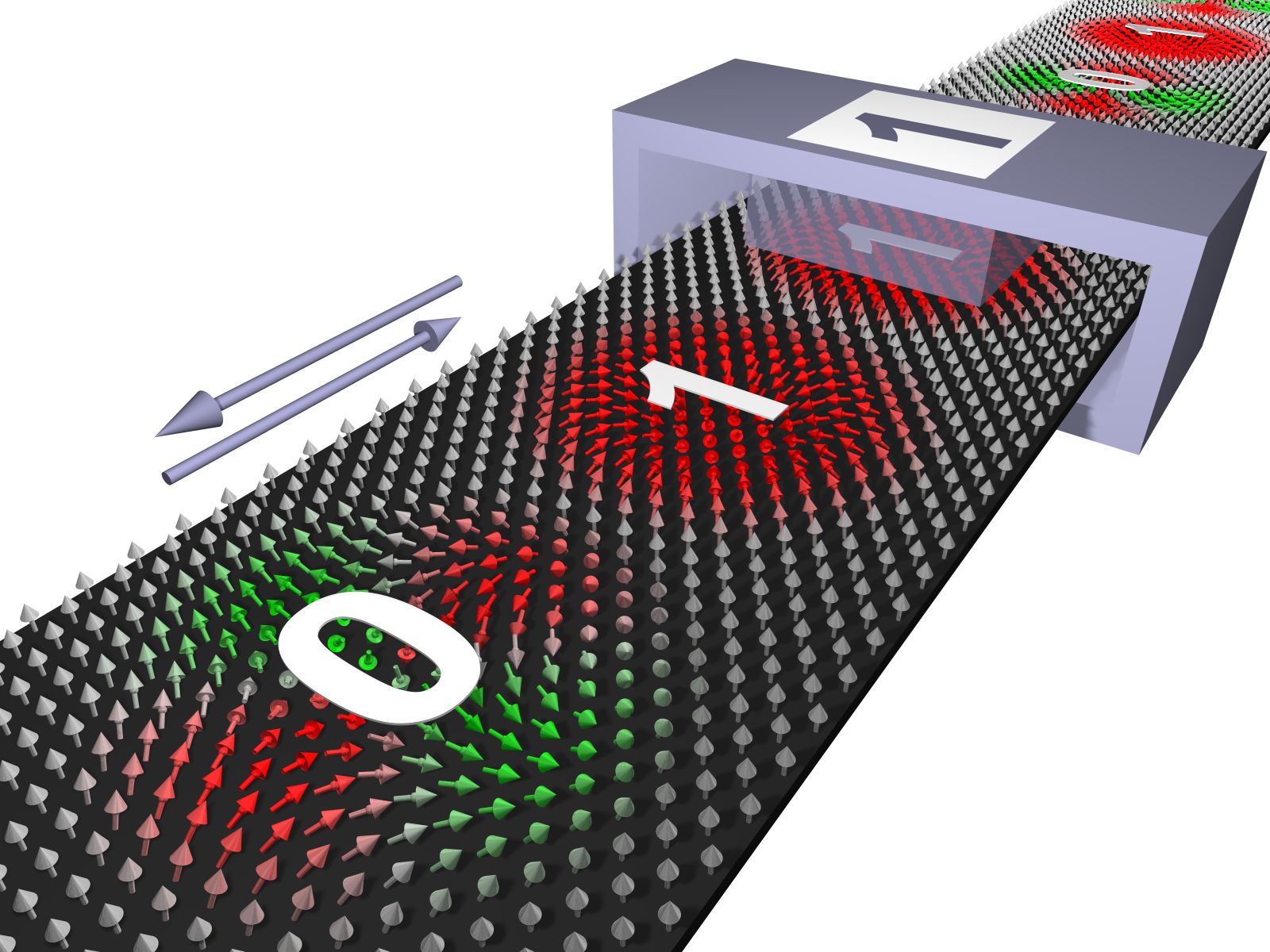 Graphic representation of “racetrack memory”. In this concept, data are stored as skyrmions (“1”) and anti-skyrmions (“0”) and are guided (large arrows) towards a read head for read outs. As only the orientation of the spins (indicated by the colour of the small arrows) changes and the atoms themselves do not move, this process requires very little energy. Copyright: Forschungszentrum Jülich

24 August 2017 – Physicists from Forschungszentrum Jülich and a mathematician from RWTH Aachen University have calculated that in thin metal layer systems, not only the tiny magnetic vortices known as skyrmions, but also their antiparticles, so-called "anti-skyrmions", can occur. These are also made up of vortex-shaped, well-ordered spin structures, but differ in the orientation of their spin: instead of being circular as in the case of skyrmions, the spins of this non-identical twin are oriented in such a way that they resemble a four-leafed clover. Using supercomputing methods, the scientists were furthermore able to suggest a material system in which it should be possible to prove the existence of anti-skyrmions experimentally: a double layer of iron on tungsten.

So far, the focus of research has been placed only on skyrmions. This could now change, particularly as the researchers were able to demonstrate that materials do exist in which these non-identical twins could simultaneously occur. This opens up new opportunities for both basic research and novel applications. As a result, these findings, emerging from research undertaken within the framework of the Jülich Aachen Research Alliance (JARA), could enable data to be stored more compactly and with greater energy-efficiency than today, for example using so-called "racetrack memory".

Racetrack memory should one day work in a similar way to punched tape technology back when computers were still in their infancy: as in those days, when a hole would represent a "one" and "no hole" would represent a "zero", in the future a skyrmion would represent a "one" and "no skyrmion" would represent a "zero", mirroring the original idea. Voltage should allow the skyrmions to migrate over to a read head, one after the other. Until now, it was not possible to ensure that the vortices at room temperature would not move inadvertently to places where "no skyrmions" should be found. Replacing skyrmion-free zones with anti-skyrmions could provide a solution, as this type of system is more stable even at higher temperatures, as the scientists were able to demonstrate.

Another study undertaken by scientists from Jülich together with colleagues from Germany, Sweden, Russia and China could also further the implementation of racetrack memory. They systematically investigated the formation of skyrmions in nano-strips both experimentally, using electron holography at the Jülich Ernst Ruska-Centre, and theoretically at the Peter Grünberg Institute. As a consequence, they were able to discover how the vortices can be produced effectively in different shapes and sizes depending on the width of the strip. These results could help in optimizing the design of components for racetrack memory.