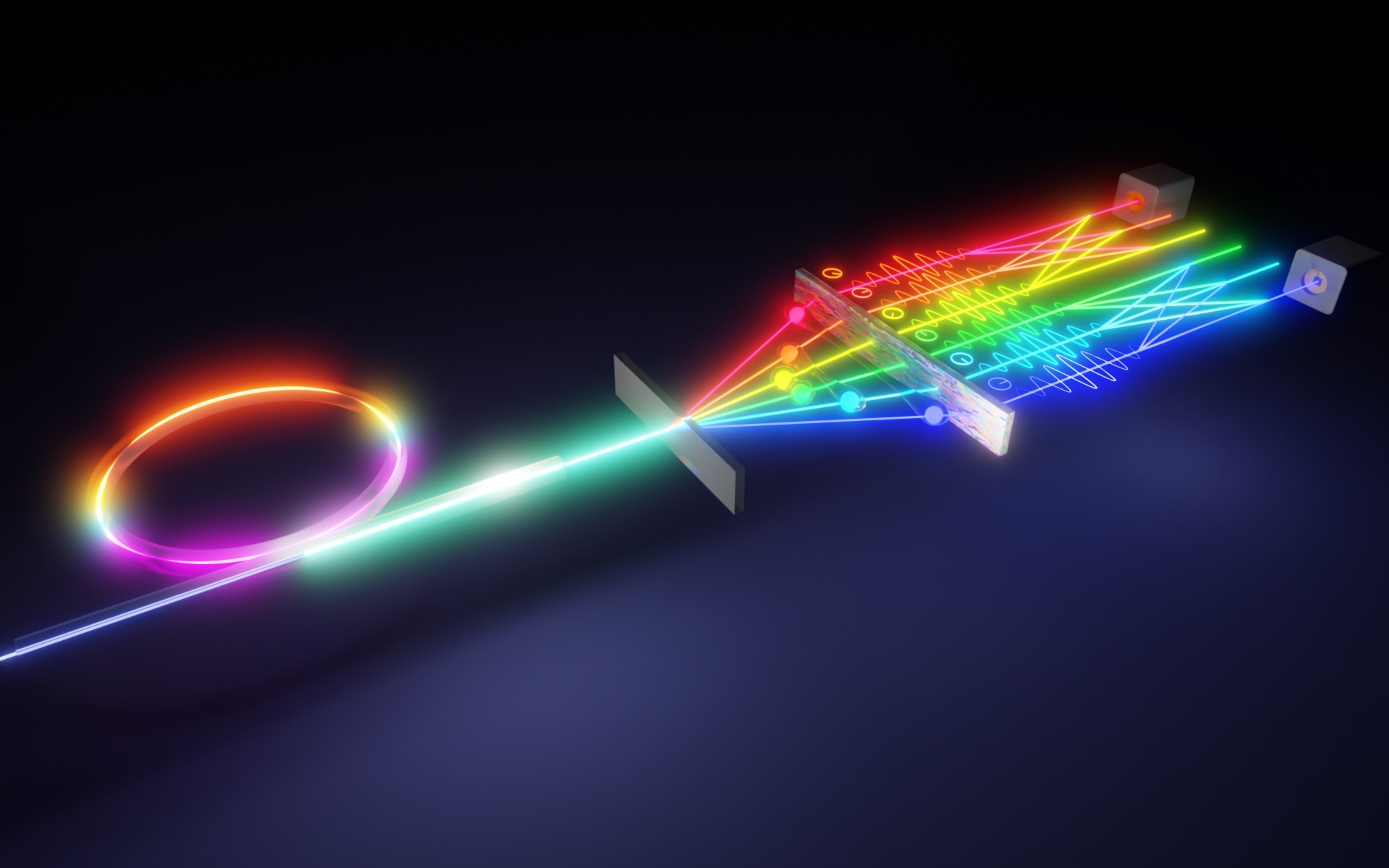 The micro-ring resonator, shown here as a closed loop, generated high-dimensional photon pairs. Researchers examined these photons by manipulating the phases of different frequencies, or colors, of light and mixing frequencies, as shown by the crisscrossed multicolor lines. Credit: Yun-Yi Pai/ORNL, U.S. Dept. of Energy

Using existing experimental and computational resources, a multi-institutional team has developed an effective method for measuring high-dimensional qudits encoded in quantum frequency combs, which are a type of photon source, on a single optical chip.

Although the word “qudit” might look like a typo, this lesser-known cousin of the qubit, or quantum bit, can carry more information and is more resistant to noise — both of which are key qualities needed to improve the performance of quantum networks, quantum key distribution systems and, eventually, the quantum internet.

Classical computer bits categorize data as ones or zeroes, whereas qubits can hold values of one, zero or both — simultaneously — owing to superposition, which is a phenomenon that allows multiple quantum states to exist at the same time. The “d” in qudit stands for the number of different levels or values that can be encoded on a photon. Traditional qubits have two levels, but adding more levels transforms them into qudits.

Recently, researchers from the U.S. Department of Energy’s Oak Ridge National Laboratory, Purdue University and the Swiss Federal Institute of Technology Lausanne, or EPFL, fully characterized an entangled pair of eight-level qudits, which formed a 64-dimensional quantum space — quadrupling the previous record for discrete frequency modes. These results were published in Nature Communications.

“We’ve always known that it’s possible to encode 10- or 20-level qudits or even higher using the colors of photons, or optical frequencies, but the problem is that measuring these particles is very difficult,” said Hsuan-Hao Lu, a postdoctoral research associate at ORNL. “That’s the value of this paper — we found an efficient and novel technique that is relatively easy to do on the experimental side.”

Qudits are even more difficult to measure when they are entangled, meaning they share nonclassical correlations regardless of the physical distance between them. Despite these challenges, frequency-bin pairs — two qudits in the form of photons that are entangled in their frequencies — are well suited to carrying quantum information because they can follow a prescribed path through optical fiber without being significantly modified by their environment.

“We combined state-of-the-art frequency-bin production with state-of-the-art light sources, and then used our technique to characterize high-dimensional qudit entanglement with a level of precision that hasn’t been shown before,” said Joseph Lukens, a Wigner Fellow and research scientist at ORNL.

The researchers began their experiments by shining a laser into a micro-ring resonator — a circular, on-chip device fabricated by EPFL and designed to generate nonclassical light. This powerful photon source takes up 1 square millimeter of space — comparable in size to the point of a sharpened pencil — and allowed the team to generate frequency-bin pairs in the form of quantum frequency combs. 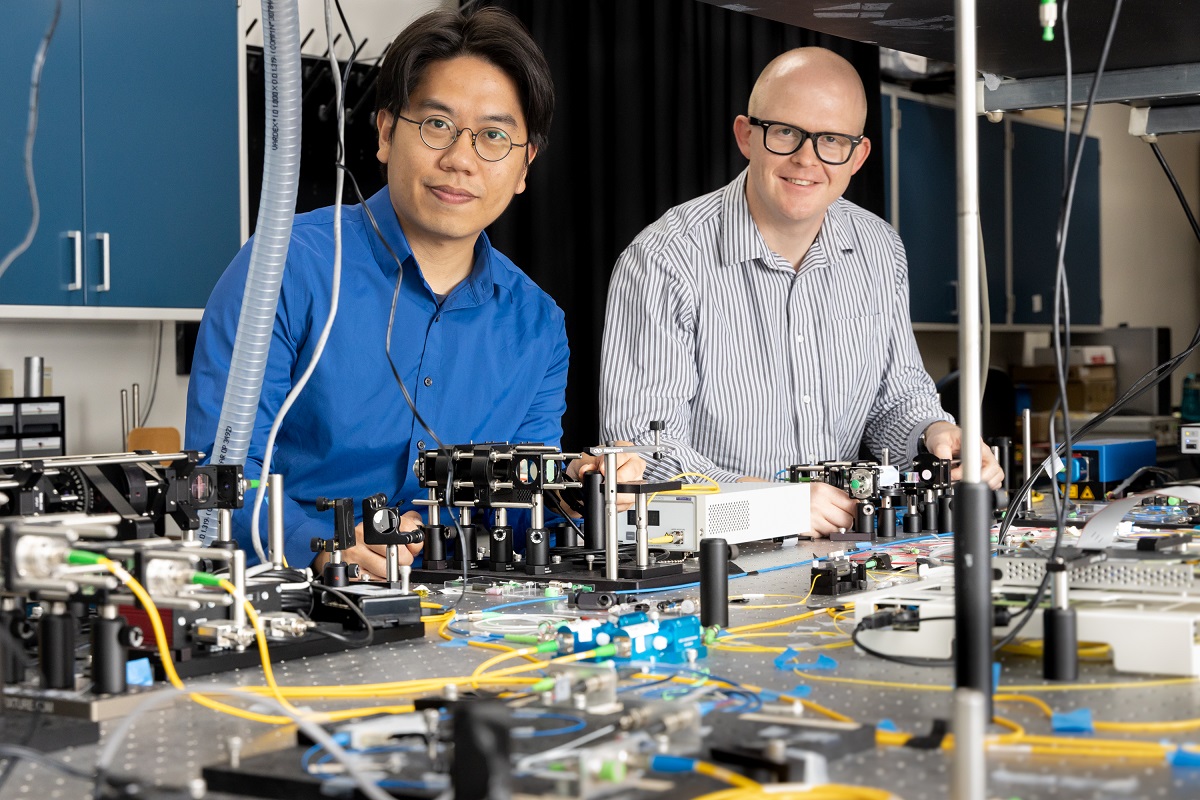 Typically, qudit experiments require researchers to construct a type of quantum circuit called a quantum gate. But in this case, the team used an electro-optic phase modulator to mix different frequencies of light and a pulse shaper to modify the phase of these frequencies. These techniques are studied extensively at the Ultrafast Optics and Optical Fiber Communications Laboratory led by Andrew Weiner at Purdue, where Lu studied before joining ORNL.

These optical devices are commonplace in the telecommunications industry, and the researchers performed these operations at random to capture many different frequency correlations. According to Lu, this process is like rolling a pair of six-sided dice and recording how many times each combination of numbers appears — but now the dice are entangled with each other.

“This technique, which involves phase modulators and pulse shapers, is heavily pursued in the classical context for ultrafast and broadband photonic signal processing and has been extended to the quantum avenue of frequency qudits,” Weiner said.

To work backward and infer which quantum states produced frequency correlations ideal for qudit applications, the researchers developed a data analysis tool based on a statistical method called Bayesian inference and ran computer simulations at ORNL. This accomplishment builds on the team’s previous work focused on performing Bayesian analyses and reconstructing quantum states.

The researchers are now fine-tuning their measurement method to prepare for a series of experiments. By sending signals through optical fiber, they aim to test quantum communication protocols such as teleportation, which is a method of transporting quantum information, and entanglement swapping, which is the process of entangling two previously unrelated particles.

Karthik Myilswamy, a graduate student at Purdue, plans to bring the micro-ring resonator to ORNL, which will enable the team to test these capabilities on the laboratory’s quantum local area network.

“Now that we have a method to efficiently characterize entangled frequency qudits, we can perform other application-oriented experiments,” Myilswamy said.