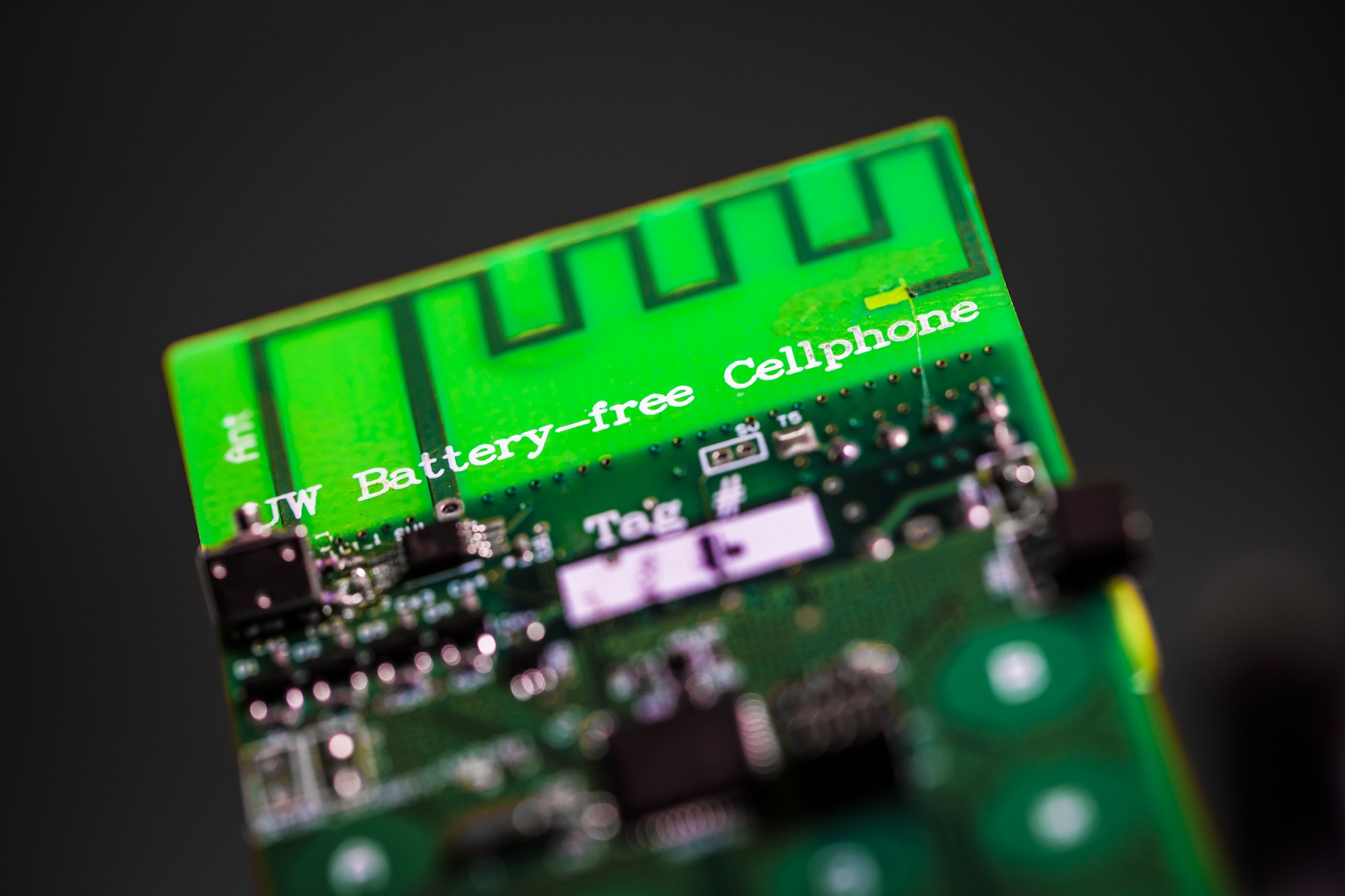 UW engineers have designed the first battery-free cellphone that can send and receive calls using only a few microwatts of power.Mark Stone/University of Washington

University of Washington researchers have invented a cellphone that requires no batteries — a major leap forward in moving beyond chargers, cords and dying phones. Instead, the phone harvests the few microwatts of power it requires from either ambient radio signals or light.

The team also made Skype calls using its battery-free phone, demonstrating that the prototype made of commercial, off-the-shelf components can receive and transmit speech and communicate with a base station.

The new technology is detailed in a paper published July 1 in the Proceedings of the Association for Computing Machinery on Interactive, Mobile, Wearable and Ubiquitous Technologies.

“We’ve built what we believe is the first functioning cellphone that consumes almost zero power,” said co-author Shyam Gollakota, an associate professor in the Paul G. Allen School of Computer Science & Engineering at the UW. “To achieve the really, really low power consumption that you need to run a phone by harvesting energy from the environment, we had to fundamentally rethink how these devices are designed.”

The team of UW computer scientists and electrical engineers eliminated a power-hungry step in most modern cellular transmissions — converting analog signals that convey sound into digital data that a phone can understand. This process consumes so much energy that it’s been impossible to design a phone that can rely on ambient power sources.

Instead, the battery-free cellphone takes advantage of tiny vibrations in a phone’s microphone or speaker that occur when a person is talking into a phone or listening to a call.

An antenna connected to those components converts that motion into changes in standard analog radio signal emitted by a cellular base station. This process essentially encodes speech patterns in reflected radio signals in a way that uses almost no power.

To transmit speech, the phone uses vibrations from the device’s microphone to encode speech patterns in the reflected signals. To receive speech, it converts encoded radio signals into sound vibrations that that are picked up by the phone’s speaker. In the prototype device, the user presses a button to switch between these two “transmitting” and “listening” modes. 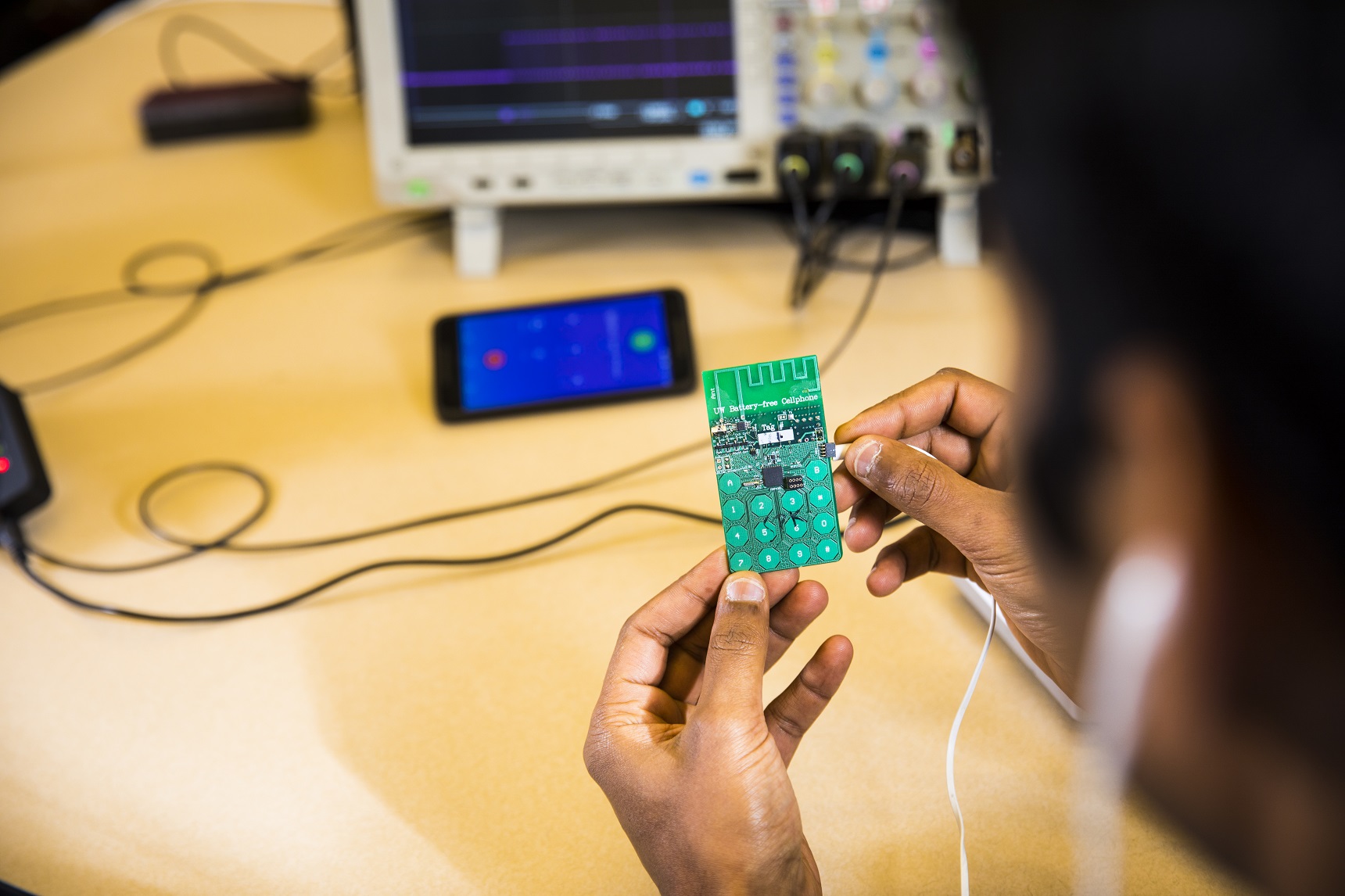 The battery-free phone developed at the UW can sense speech, actuate the earphones, and switch between uplink and downlink communications, all in real time. It is powered by either ambient radio signals or light.Mark Stone/University of Washington

Using off-the-shelf components on a printed circuit board, the team demonstrated that the prototype can perform basic phone functions — transmitting speech and data and receiving user input via buttons. Using Skype, researchers were able to receive incoming calls, dial out and place callers on hold with the battery-free phone.

“The cellphone is the device we depend on most today.  So if there were one device you’d want to be able to use without batteries, it is the cellphone,” said faculty lead Joshua Smith, professor in both the Allen School and UW’s Department of Electrical Engineering. “The proof of concept we’ve developed is exciting today, and we think it could impact everyday devices in the future.”

The team designed a custom base station to transmit and receive the radio signals. But that technology conceivably could be integrated into standard cellular network infrastructure or Wi-Fi routers now commonly used to make calls.

“You could imagine in the future that all cell towers or Wi-Fi routers could come with our base station technology embedded in it,” said co-author Vamsi Talla, a former UW electrical engineering doctoral student and Allen School research associate. “And if every house has a Wi-Fi router in it, you could get battery-free cellphone coverage everywhere.”

The battery-free phone does still require a small amount of energy to perform some operations. The prototype has a power budget of 3.5 microwatts.

The UW researchers demonstrated how to harvest this small amount of energy from two different sources. The battery-free phone prototype can operate on power gathered from ambient radio signals transmitted by a base station up to 31 feet away.

Using power harvested from ambient light with a tiny solar cell — roughly the size of a grain of rice — the device was able to communicate with a base station that was 50 feet away.

Many other battery-free technologies that rely on ambient energy sources, such as temperature sensors or an accelerometer, conserve power with intermittent operations. They take a reading and then “sleep” for a minute or two while they harvest enough energy to perform the next task. By contrast, a phone call requires the device to operate continuously for as long as the conversation lasts.

“You can’t say hello and wait for a minute for the phone to go to sleep and harvest enough power to keep transmitting,” said co-author Bryce Kellogg, a UW electrical engineering doctoral student. “That’s been the biggest challenge — the amount of power you can actually gather from ambient radio or light is on the order of 1 or 10 microwatts. So real-time phone operations have been really hard to achieve without developing an entirely new approach to transmitting and receiving speech.”

Next, the research team plans to focus on improving the battery-free phone’s operating range and encrypting conversations to make them secure. The team is also working to stream video over a battery-free cellphone and add a visual display feature to the phone using low-power E-ink screens.

The research was funded by the National Science Foundation and Google Faculty Research Awards.