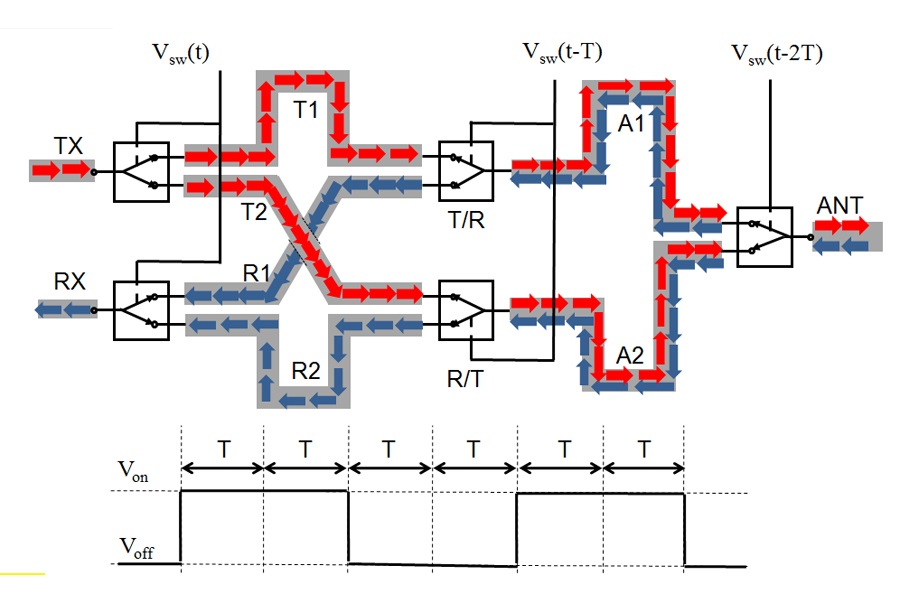 SSDL circulator: The key to the UCLA design is an approach called “sequentially switched delay lines,” which is similar to the way transportation engineers route passenger trains from one track to another. Yuanxun Wang/UCLA

Mobile phones and computers use electromagnetic waves to send and receive information — they’re what enable our devices to upload photos and download apps. But there is only a limited amount of bandwidth available on the electromagnetic spectrum.

Engineers have envisioned that enabling wireless devices to send and receive information on the same frequency would be one way to overcome that limitation. But that approach posed its own challenge, because incoming and outgoing waves on the same frequency typically interfere with each other. (That’s why, for example, radio stations that use the same frequency disrupt each other’s signals when a radio is close enough to both of them.)

A new design developed by UCLA electrical engineers could solve that problem. The researchers proved that a circulator — a tiny device that sends and receives electromagnetic waves from different ports — that shared the same antenna could enable signals to be sent and received simultaneously. Sending signals on the same frequencies that they are received could essentially double the space on the spectrum available for chips to transfer data.

A paper about the work was published in Scientific Reports, an open-access journal published by Nature.

Previous generations of circulators used magnetic material, which cannot be incorporated into current microchips and doesn’t have enough bandwidth for today’s smartphones and other devices. The UCLA prototype uses coaxial cables to route the electromagnetic waves through non-magnetic material, but the device would ultimately be likely to be built with silicon-based or other semiconductor materials.

The key to the design is an approach called “sequentially switched delay lines,” which is similar to the way transportation engineers route passenger trains from one track to another, to allow multiple trains to enter and exit train stations at the same time and avoid collisions, even if there are only a few available tracks.

“In a busy train station, trains are actively switched onto and off of tracks to minimize the time they might be stopped to get into and out of the station,” said Yuanxun “Ethan” Wang, an associate professor of electrical engineering at the UCLA Henry Samueli School of Engineering and Applied Science who led the research. “This is the same idea, only with electromagnetic waves of the same frequency carrying information inside a chip.”

The team demonstrated its concept using commercially available parts, and is now testing it on specially fabricated chips.

The design includes six transmission lines, all of equal lengths, connected by five switches. The switches are turned on and off sequentially to distribute electromagnetic waves and allow simultaneous transmission and reception of data-carrying signals.

Previous studies have demonstrated that signals could be sent and received simultaneously using the same electromagnetic frequency, including one led by led by Wang in 2014, which modulated the signals. But, according to the researchers, the new design is the first one that offers unlimited bandwidth.

It could easily be incorporated into current chip manufacturing processes and within almost all industry-standard designs. Previous concepts would have required the use of components that don’t align with current industry standards, or have only worked in a narrow band of the spectrum. Wang said the new UCLA circulator works from the lowest of frequencies up to radio frequencies, and might even work in the visible light part of the spectrum.

“Just like a capacitor or a resistor, a device capable of routing electromagnetic waves is a fundamental building block in almost any circuit,” Wang said. “Making it available with unlimited bandwidth would trigger a revolution in design of mobile phones, automobile sensors or even quantum computers.”

Wang’s research group recently received a $2.2 million grant from the Defense Advanced Research Project Agency’s Microsystems Technology Office to develop the device for use on microchips.