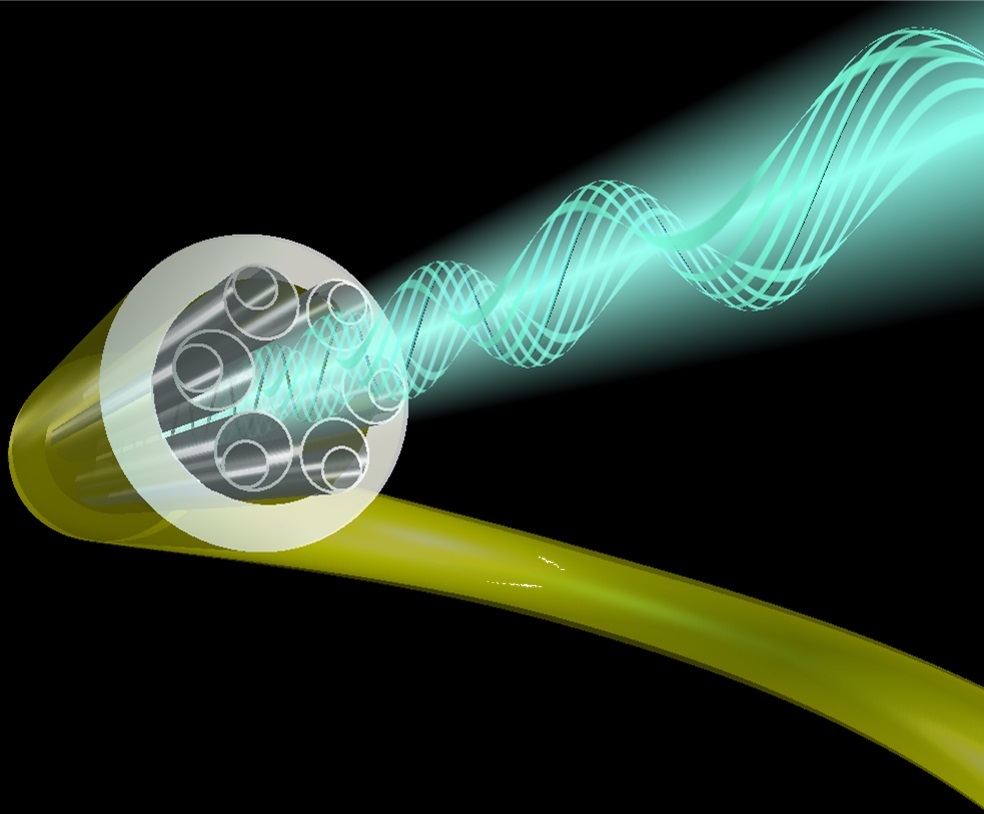 The fibres developed and reported in the paper are the result of over ten years research by the ORC in developing Nested Antiresonant Nodeless Fibres (NANFs), a special type of hollow core fibres that confine light in the central void thanks to thin glass membranes surrounding the core

The next generation of optical fibre could be a step closer as a new study has shown that fibres with a hollowed out centre, created in Southampton, could reduce loss of power currently experienced in standard glass fibres.

The COVID-19 crisis has seen people all over the world rapidly move their work and social lives online and communities have never relied on the internet more. The ever-increasing number of Zoom calls and webinars has highlighted the need to keep advancing the technology that has made this possible.

For over 50 years, optical fibres made of silica glass have been the transmission medium of choice for high-speed optical communications — powering the global internet and cloud-based services used by households and businesses around the world. They are also used for sensing oil and gas installations, structural monitoring for railways and bridges, medical endoscopes and many more applications as part of a $40 billion global market.

However, due to “scattering” of the light inside the glass, a fraction of the transmitted power is lost, a process known as attenuation, and this power loss becomes increasingly more of a problem as the wavelength of light is shortened. This higher transmission loss through the fibre poses a serious limitation to the performance of all applications that require shorter wavelengths.

In this new study, published in Nature Communications, researchers from the University of Southampton have demonstrated that guiding light through air filled fibres offers a potential way to overcome this insurmountable attenuation limit set by the glass’s scattering.

A team from the University’s Optoelectronics Research Centre (ORC) created three different hollow core fibres, with losses comparable or lower than that achieved in solid glass fibres around technologically relevant wavelengths of 660, 850, and 1060 nanometres. The lower attenuation, in a fibre that guides light through air, offers the potential for advances in quantum communications, data transmission, and laser power delivery.

Professor Francesco Poletti from the ORC said, “Many alternative glass types and waveguide technologies have been investigated since the 1970s to try to solve this problem, all to no avail.”

“Our findings show that hollow core fibres have the potential to outperform the current optical fibres at various wavelengths used in optical technology today. Not only do they have lower attenuation, they can also withstand higher laser intensities, such as those needed to melt rocks and drill oil wells, as well as produce more efficient lasers for manufacturing.”

Professor Poletti added that the hollow core fibres can also transmit undistorted laser pulses with peak power levels so high that they would be unusable if transmitted by standard glass fibres, and preserve the polarisation of light needed to produce more accurate sensors and imaging endoscopes.

The fibres developed and reported in the paper are the result of over ten years research by the ORC in developing Nested Antiresonant Nodeless Fibres (NANFs), a special type of hollow core fibres that confine light in the central void thanks to thin glass membranes surrounding the core. Their first fibres had attenuations of 5 decibels (dB), i.e. only 30% of light transmission, for every metre of fibre. New physical understanding with contributions from the worldwide community, and substantial development in fabrication technology led by the Southampton team, have now led one of the fibres reported in this study to improve this by a factor of 10,000 by achieving an attenuation of only 5 dB every 10 kilometres.

Professor Poletti continued. “The technology we are developing has the potential to underpin the development of faster datacentres with shorter delays for the end-user, more accurate gyroscopes for interplanetary missions, more efficient laser based manufacturing, to name but a few.”

The University of Southampton team that has invented and developed this optical fibre technology under funding from the ERC project Lightpipe is continuing to work on improving the optical performance of these fibres, while producing longer lengths at a lower cost.

“The transmission capacity of optical fibres is so large that we never thought we’d reach the point where we would use it all up. But in the last five to ten years, we’ve realised that we’re now close to doing just that and the impact of COVID-19 has accelerated this further. This means that no longer can we tweak conventional fibres to mine more capacity but must resort to the sledgehammer approach of installing huge numbers of new fibre cables. This is possible but drives up costs.

“A faster, more reliable internet with larger bandwidth would help us sustain our current levels of online work and socialising and also enable us to take this further in areas like 3D video conferencing and virtual reality.”

Professor Poletti concluded, “We are convinced that we might have finally identified a solution with the potential to complement, and in many cases, replace all-solid silica fibres that have been the mainstay in domestic and commercial applications for half a century.”