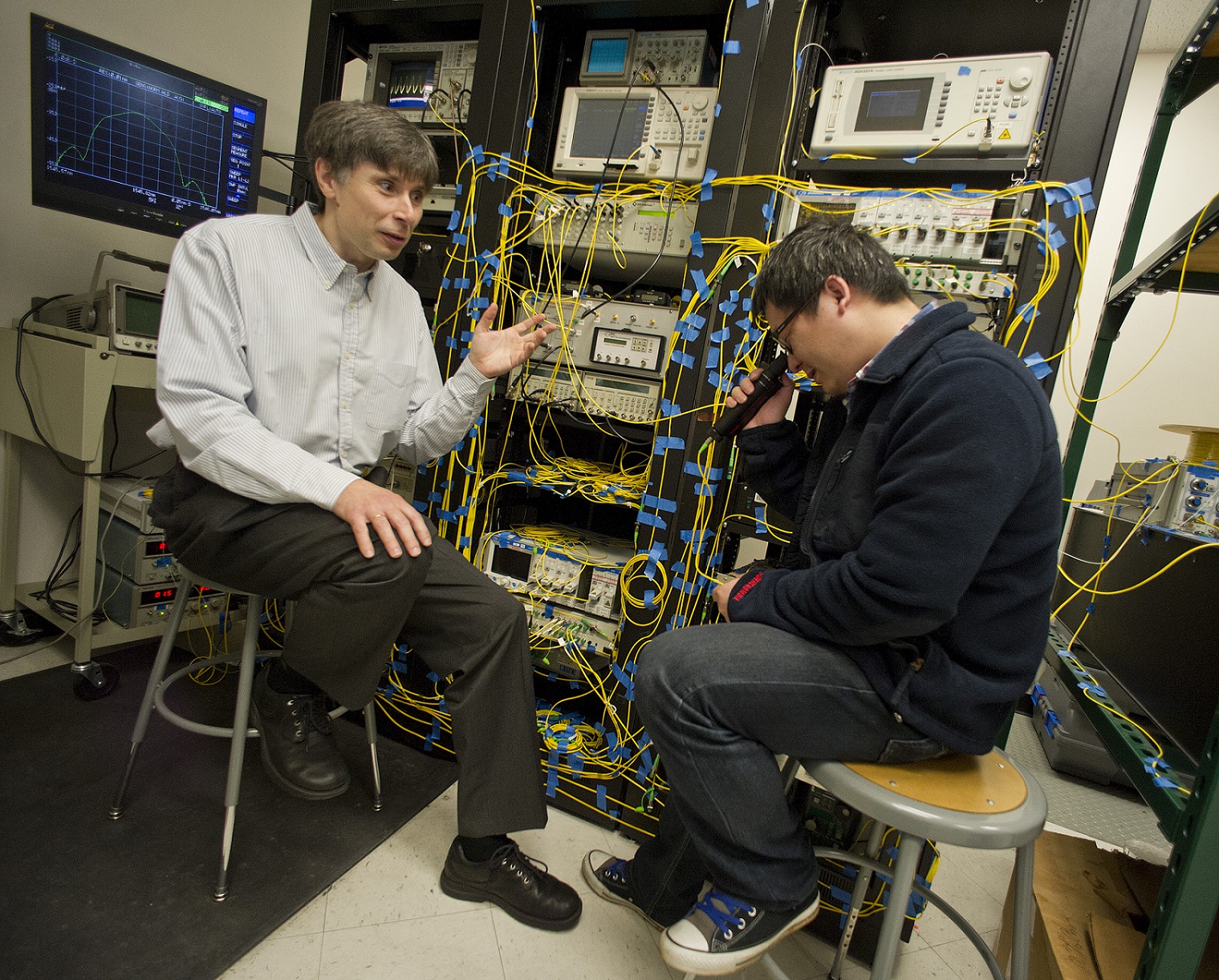 Michael Vasilyev, left, a UTA electrical engineering professor, speaks with one of his graduate students.

Nonlinear-optical effects, such as intensity-dependent refractive index, can be used to process data thousands of times faster than what can be achieved electronically. Such processing has, until now, worked only for one optical beam at a time because the nonlinear-optical effects also cause unwanted inter-beam interaction, or crosstalk, when multiple light beams are present.

An article published in the prestigious Nature Communications journal, by the research group of Michael Vasilyev, an electrical engineering professor at UTA, in collaboration with Taras I. Lakoba, a mathematics professor at UVM, detailed an experimental demonstration of an optical medium in which multiple beams of light can autocorrect their own shapes without affecting one another.

This work, funded by the National Science Foundation, enables simultaneous nonlinear-optical processing of multiple light beams by a single device without converting them to electrical form, opening the way for this technology to reach its full multi-Terabit per second potential, resulting in cheaper and more energy efficient high-speed internet communications.

Currently, to eliminate the noise accumulated during light propagation in optical communication links, telecom carriers must resort to frequent optoelectronic regeneration, where they convert optical signals to electrical via fast photodetectors, process them with silicon-based circuitry, and then convert the electrical signals back to optical, using lasers followed by electro-optic modulators. Since each optical fiber can carry over a hundred different signals at various wavelengths, known as wavelength-division multiplexing (WDM), such an optoelectronic regeneration needs to be done separately for each wavelength, making regenerators large, expensive and inefficient consumers of power.

An attractive alternative to this is processing the optical signal directly, without converting it to electrical and back. In particular, the speed of light propagating in a transparent medium can be slightly modified by a change in the light intensity. This is a manifestation of a nonlinear-optical effect known as “self-phase modulation” or SPM. If light contains both signal and noise, the SPM can help clean the signal from noise by scattering the noise energy into frequencies well outside the signal band, from where the noise can be easily removed by a filter. When applied to light containing useful data, this SPM-enabled noise-removal operation is called “all-optical regeneration,” which can result in optical auto-correction of the signals carrying hundred times faster data rates than what can be processed electronically.

However, the adoption of the all-optical regeneration in communication systems has been hindered by its inability to work with WDM signals. This is because in the presence of multiple signal beams, or WDM channels, the desired SPM is always accompanied by two undesirable effects: cross-phase modulation, where one channel’s intensity modifies propagation speed of another channel, and four-wave mixing, where interaction of several channels leads to interference with other channels.

In their published article, Vasilyev and colleagues report experimental demonstration of a novel group-delay-managed nonlinear-optical medium, where strong SPM effect is achieved without such inter-channel interference. Splitting a conventional nonlinear medium, such as an optical fiber, into several short sections separated by special periodic-group-delay filters yields a medium in which all frequency components of the same WDM channel travel with the same speed, ensuring strong SPM. Different WDM channels travel with different speeds, which dramatically suppresses any inter-channel interaction.

“Our new nonlinear medium has allowed us to demonstrate simultaneous all-optical regeneration of 16 WDM channels by a single device, and this number has only been limited by the logistical constraints of our laboratory” Vasilyev said. “This experiment opens the opportunities to scale the number of channels to over a hundred without increasing the cost, all in a book-sized device.”

The multi-channel regenerator could even potentially shrink to the size of a matchbox in the future if the nonlinear-optical medium could be implemented on a microchip.

“This breakthrough is an example of how UTA researchers can positively impact the physical and economic well-being of society in the area of data-driven discovery and global environmental impact, themes in UTA’s Strategic Plan 2020 Bold Solutions | Global Impact,” said Jonathan Bredow, professor and chair of the Department of Electrical Engineering in UTA's College of Engineering.

“Previous efforts to implement nonlinear-optical processing, such as regeneration, failed to make an impact because there was no advantage to employing them over electrical signals due to the inability to use more than one channel. Now that Dr. Vasilyev’s group has overcome that obstacle, there are tremendous new possibilities for faster, more efficient transmission of messages,” Bredow said.