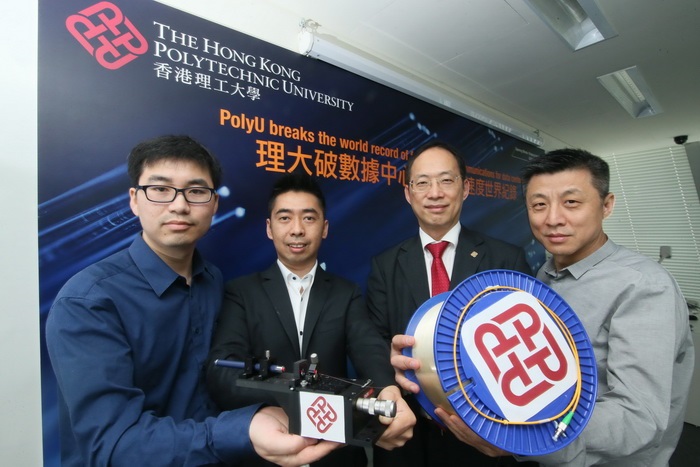 The Hong Kong Polytechnic University (PolyU) has achieved the world's fastest optical communications speed for data centres by reaching 240 G bit/s over 2km, 24 times of the existing speed available in the market. Compared to existing alternatives in the market, the technology developed by PolyU has reduced the cost of data transmission per unit to just one-fourth, and therefore is practical for commercialisation purposes. Speedy transmission at a significantly low cost for data centres enables end users to widely use new forms of communications such as immersive videos, augmented reality and virtual reality. On a societal level, the increased transmission speed will open up a new era for Big Data and Internet of Things (IoT) applications, driving innovation and technology advancement.

Data centres refer to collections of inter-connected computer servers and associated components to process vast amount of internet traffic and computations. Google, Facebook, YouTube are some widely-known examples of data centres on a global scale. Whenever we conduct a search in search engines, read a newsfeed on social media platform, stream a video online, or upload a file to cloud, the traffic goes through data centres. Due to the ever increasing demand for data transmission, data centre systems are the fastest growing and most important part of global telecommunications networks nowadays and they serve to be the backbone of "Big Data" and "IoT" applications. However, it is also where the bottleneck of data transmission speed lies. Low-cost and high speed upgrades for data centre connections are needed. However, there has not been such a practical solution in the market which is a major technological challenge facing data centres.

In optical communications, all types of information such as text, sound, music, image, and video are digitised and transmitted as light signals over optical fibre. As light interacts, through reflection and refraction, with the molecules of the fibre during transmission, light signal changes when it arrives at the receiver, making it a distorted signal. The higher the transmission speed and the longer the distance, the more severe is the distortion, rendering the light signal unrecognizable at the receiver. This leads to failed transmission and limits the maximum transmission speed. By overcoming the challenge of distortion, speed can be increased.

The existing approach to undo distortion is the use of specialised hardware. Using high-cost components, such as specialised optical fibre, is a possible way to reduce distortion. However, its high cost and bulky size rendered such solution impractical for data centre business. Instead of using costly components, PolyU's research team develops a software approach to undo the distortions. 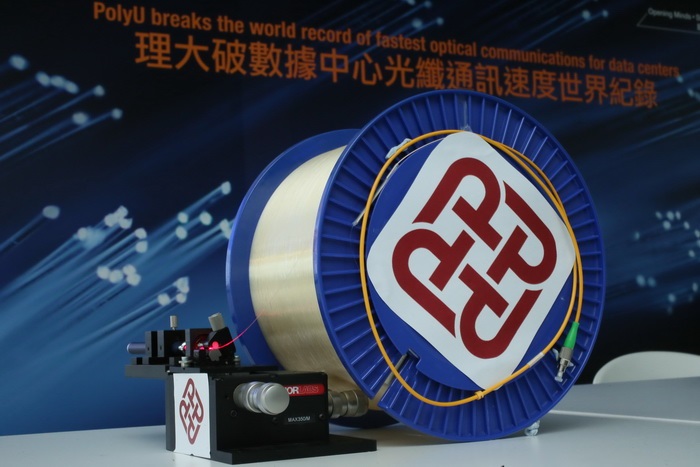 According to theories in Optics, interactions between light and a single molecule of fibre is well-known. However, in an optical fibre consisting of billions of molecules randomly placed and oriented with each other, the overall effect of interactions between light signal and the fibre become unknown, and therefore the signal distortion is also random. Nevertheless, there is "an order in chaos". Through performing big data statistical analysis of massive amounts of transmitted and received light signals, we can identify the distortion pattern, and a considerable reversion of distortion can be made. In doing so, a significant increase in transmission speed can be achieved with inexpensive and mature components. In conclusion, by combining Optics and Statistics, the algorithm software developed by PolyU enables simpler, cheaper, and commercially favorable solutions with world-record breaking speeds for next generation data centre applications.