Ulysse Nardin Musical Marvel Delights on the Hour, on Request with Vivaldi Melody. 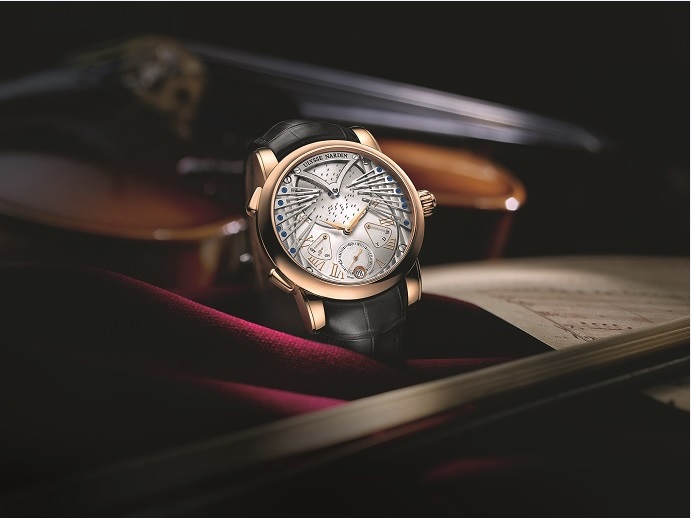 Ulysse Nardin delighted high horology enthusiasts in 2013 with the introduction of “Stranger”. A marvel timepiece, it married movement and design with music, playing a rendition of Strangers in the Night.

In its second release, the in-house developed, self-winding, musical mechanical watch performs the Vivaldi melody, Violin Concerto in E. Best known for his violin concertos, Four Seasons, famed Baroque composer Vivaldi’s brilliance is bestowed on this limited edition of 99 pieces crafted from 18-karat rose gold 5N. This new timepiece is a symbol of the harmonious melding of tradition and technology.

Based on the Ulysse Nardin caliber 690 using silicium technology, the timekeeper is not only easy to operate, but it also takes wearers down the reminiscent road of childhood. Its muse: a classical music box. Within, it’s as if a music box has been whittled down and flattened to supercharge this superb timepiece. On the hour and on request, owners can enjoy listening to this cheerful and soothing Vivaldi melody.

By simply pressing the on/off pusher at the 10 o’clock position, the musical mechanism can be activated or deactivated. Press the melody-on-call pusher at 8 o’clock and instant pleasure comes to those who seek a melodic lift throughout their day.

Unique to this collection, as well, is how to wind the wristwatch, correct the time and set the date. These actions are completed by triggering the crown functions over a pusher instead of the customary action of pulling the crown. A prime advancement in watchmaking, the movement enables adjustments with significant ease, as each
manipulation happens by a forward or backward turn of the crown. 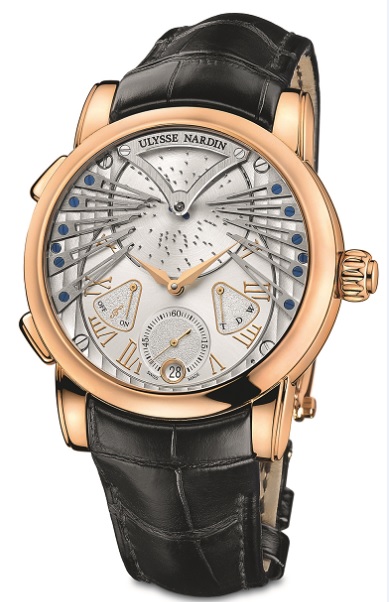 As revolutionary as it is in engineering, it is equally stylish. Exhibiting a modern appeal, sleek lines are tempered by a repetitive circle motif. Large Roman numerals mark the hours, adding a casual air. Its aesthetic is further warmed by an original medallion on the back denoting its authenticity as a Ulysse Nardin musical masterpiece. Currently crafted in rose gold, this exclusive item would be just as alluring in other colors, too. It may simply be a matter of time.

A renowned manufacturer of musical timepieces, such as Stranger, and Genghis Khan and Alexander the Great Westminster tourbillon minute repeaters, Ulysse Nardin continues its storytelling of function, sound and aesthetic playing in perfect concert through this latest addition to its musical family of watches.