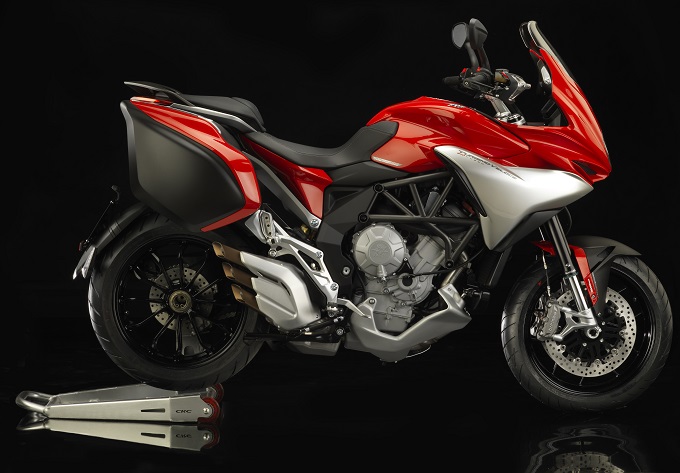 The pure emotions involved in traveling, the feeling of the open road beneath you, the limits that get pushed further every day. MV Agusta Turismo Veloce 800. A name that dates back to the early days of Meccanica Verghera, the company founded on the intuition of Count Domenico Agusta and that is now at the very pinnacle of motorcycling thanks to 75 World Championship titles and an incredible history blended with both mystique and performance.

With the Turismo Veloce (literally Fast Tourer), MV Agusta has reinterpreted the tourer concept in the name of exclusivity, agility, ease of riding and performance. Unlike all of the heavier and oversized models offered by the competition, MV Agusta has chosen to utilize a compact and powerful 800cc engine. Turismo Veloce brings back the essence of Granturismo. It does so with its unmistakable lines and styling solutions which provide the practicality that no Grand Tourer can do without. It reiterates the same ideal with an approach to riding which makes the new MV Agusta the ground breaker for a new way of travelling. 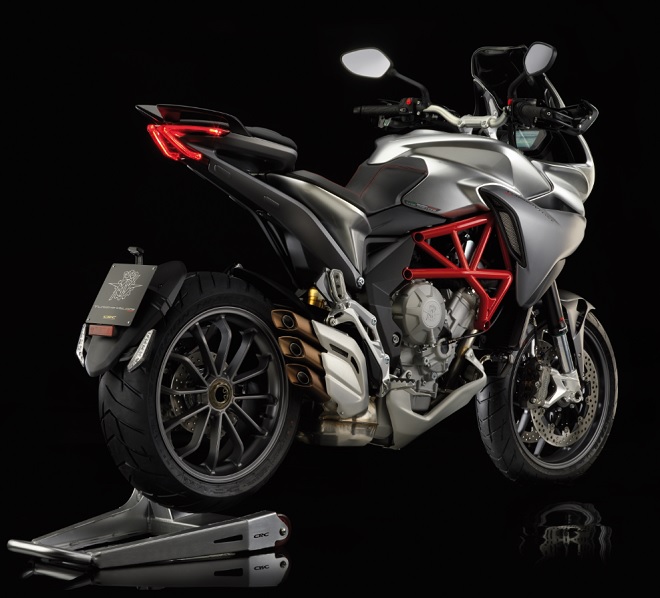 The Turismo Veloce celebrates the unique pleasure of Grand Tourismo with two models of MV Agusta: the first for traveling through time and space with the feeling of agility that only a complete but essential motorcycle can provide.

The second is the Turismo Veloce Lusso whose very name suggests things that seem to have been forgotten in time. Lusso stands for an extraordinary level of accessories and technical solutions which include the innovative MVCSC system (MV Agusta Chassis Stability Control) electronic stability control through the use of semi-active suspension, less bulky saddle bags which nevertheless can carry an astounding 60 litres and the new generation MVICS 2.0 (Motor & Vehicle Integrated Control System) inertial platform which includes the up&down EAS 2.0 electronic gear change system as well as the Anti Wheelie System. These features have never before been offered to a Touring bike. 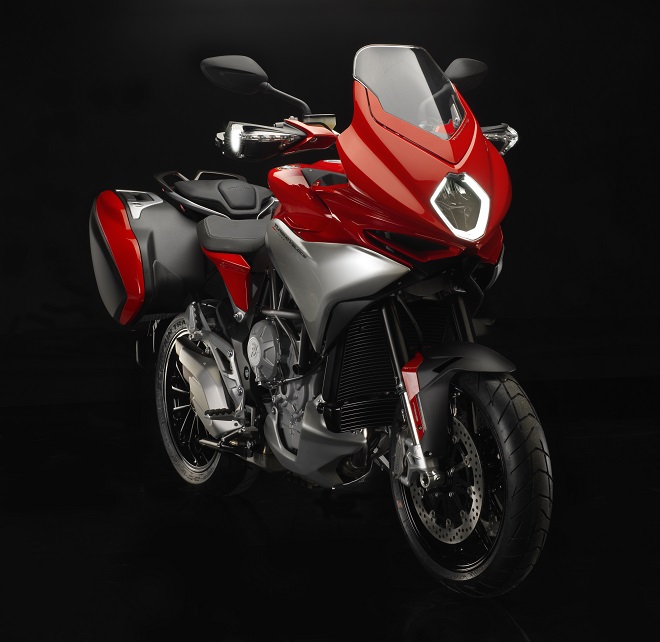 Turismo Veloce captures the essence touring and transmits the emotions directly to the rider. It means mile after mile of sweeping through curves and bends, hours of riding in complete peace with a single aim: to arrive at your destination in the most enjoyable way possible. Turismo Veloce is the first real tourer that truly provokes new emotions.

Designed for medium to long range touring, the Turismo Veloce was developed with an in-line three-cylinder 800cc engine. A milestone which further increases the wide range of machines.

The design reflects the compact size of the engine, and the overall form of the bike is beautifully balanced. The saddle bags, which are critical components on any Tourer, simply flow seamlessly into the overall motorcycle design.

On the Turismo Veloce the complete integration of aesthetics and function is a reality and the unique design a lesson of innovation. 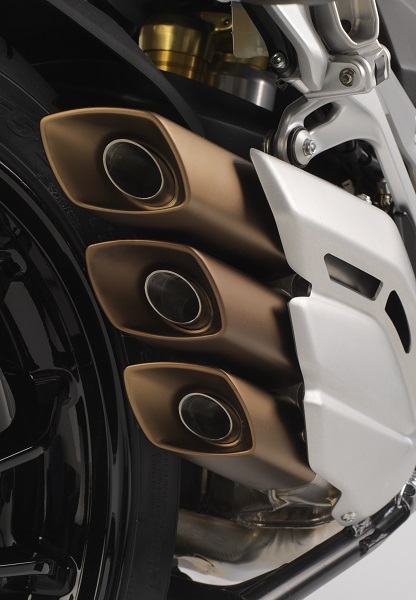 FRAME AND SUSPENSION
The frame is unmistakeably MV Agusta - steel tubing at the front set off by aluminium alloy side plates - redesigned to meet the specific requirements of the Turismo Veloce. As a result, it is wider in the middle section and features special plates designed to act as an anchor for the centre stand. The Turismo Veloce makes good use of the rider and passenger saddle support and does likewise with the saddle bags thanks to a lightweight aluminium alloy support system. The suspension system has been developed to ensure maximum comfort when touring and dynamic performance in sports use. On the Turismo Veloce Lusso, the MVCSC 2.0 system, employing Sachs front forks and rear shock absorber, features a sophisticated electronic control system which, through continuous interventions to the hydraulic settings, provides the best possible response to all specific riding conditions. The ECU includes the inertial platform which supplies vital parameter readings which are key to the continuous suspension setting changes and employs the Skyhook algorithm. This algorithm has been was specially developed by MV Agusta. The system acts on the hydraulic compression and rebound readings when the bike is in motion. 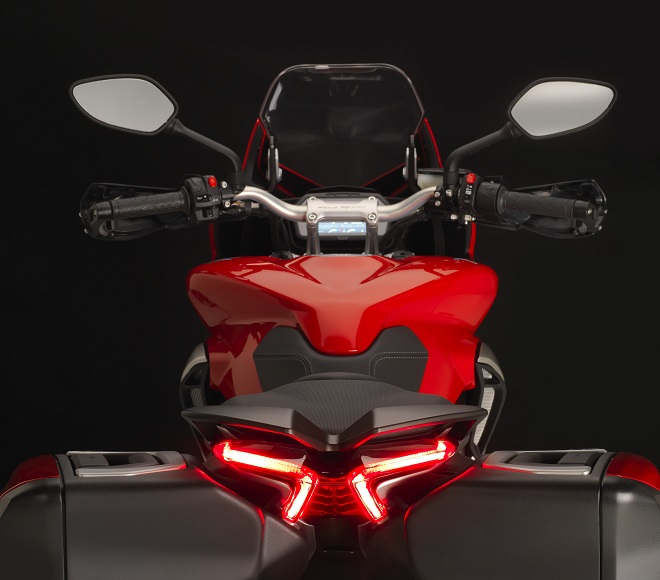 The perfect blend of agility and performance. The Turismo Veloce is a perfect example of this: its three-cylinder 800cc engine is a new interpretation of the advanced engine on which MV Agusta has based the expansion of its model range. Its size would lead you to believe it's a smaller engine thanks to the layout, and the three cylinders ensure excellent power output from low and medium revs then all the way up to the top of the rev range. This three-cylinder engine has many characteristics which make it a milestone for MV in terms of the technology applied to a standard production bike. The oil and water cooling systems have been integrated into the casting of the engine and this particular feature of the three-cylinder engine that gives it such an exceptional aesthetic impact and which allows it to blend in perfectly with the flowing lines of the Turismo Veloce. Under the cast and forged aluminium surfaces lies a counterrotating crankshaft derived directly from MotoGP. This was introduced as standard on the F3 675 and characterises the MV Agusta three-cylinder engine, not to mention the considerable impact it has on riding dynamics by significantly deceasing the effects of inertia when the bike changes direction. The precise application of fluid dynamic and thermodynamic principles, along with evolved electronic engine management systems have permitted specific fuel mapping settings to be designed to ideally suit both Tourismo and Sport riding modes on the new Turismo Veloce. 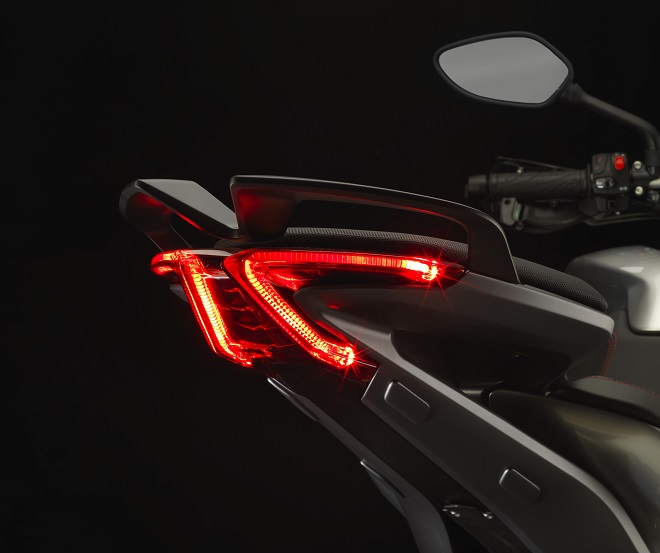 The reference platform is the new second generation MVICS 2.0 (Motor & Vehicle Integrated Control System) which permits customizing the mapping with versatility being its strongest point. There are three preset mapping options. The Tourismo option offers fuel mapping specifically designed for touring and limits power output to 100 CV. The Sport setting increases power to the maximum output of 125 CV whereas the Rain option is for riding safely when there is little road grip and the Traction Control is automatically set to the maximum level. The fourth option, Custom, is also available whereby the rider individually selects various parameters to create the best possible set-up for the riders personal desires. Among the above mentioned customizing parameters are the engine torque curve in-line with power output (two levels), rev limiter cut in point (Hard or Soft), throttle sensitivity (three levels), engine braking (two levels), engine response (two levels) and, naturally, traction control (eight levels). The MVICS 2.0 system also includes the Anti Wheelie system offered for the first time on a Touring motorcycle. The evolved electronics system also features cruise control which lets the rider set and maintain a constant speed. The EAS 2.0 (Electronically Assisted Shift) system is also present for the first time with clutch-less down-shifting and lets the rider select a higher or lower gear without having to use the clutch. 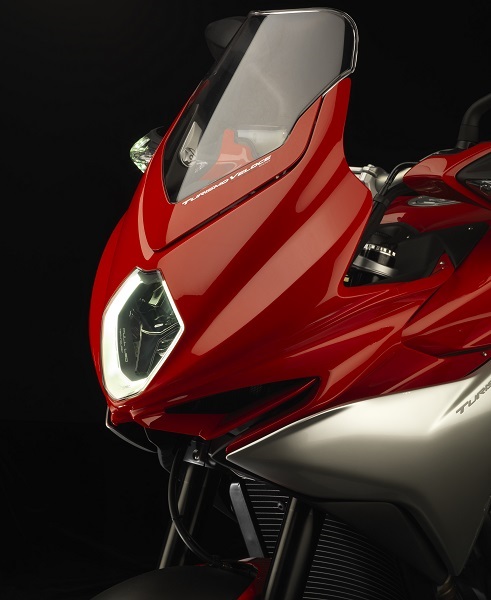 The Turismo Veloce and Turismo Veloce Lusso will only be available with ABS. Access to the many parameters by which the rider can personalize the motorcycle is via new controls on the handlebars with an improved intuitive system that lets the rider make adjustments on the move without being distracted. Access to the menu is via dedicated buttons that make implementing changes to the management system parameters even quicker. The instrument panel on the Turismo Veloce displays the most important information and was designed specifically for this model. The panel features a 5" TFT colour display which provides access to the numerous electronically controlled parameters. On the Lusso there is also an evolved GPS system to enhance its Touring character. The GPS displays route information, fuel consumption and engine use. 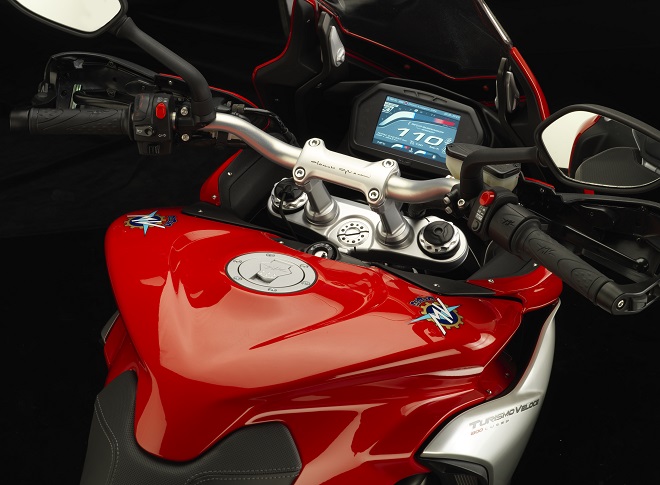 Thanks to the TFT panel being perfectly positioned, the rider never loses sight of the road and can travel in the safest way possible. Bluetooth communication as standard on the Turismo Veloce puts the rider, passenger and bike in constant communication and allows the experience to be shared with others using dedicated apps.