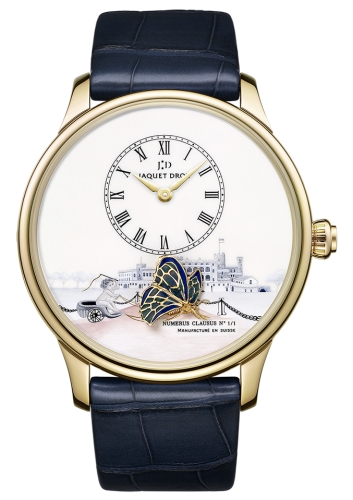 Jaquet Droz presents The Loving Butterfly, a watch produced as a single original piece for the 5th annual Only Watch event. The proceeds of the sale will benefit the Monaco Association against Muscular Dystrophy.

For nearly three centuries, Jaquet Droz has set time under the banner of wonder, excellence, and constantly renewed creativity. Jaquet Droz has also added a new dimension to this unique philosophy: generosity.

For many years Jaquet Droz has been a partner of Only Watch, a charity event which aids the fight against muscular dystrophy. Today, the watch brand reaffirms its involvement with its newest edition, offering The Loving Butterfly. This exceptional watch, published as a single original, will be auctioned in Monaco on September 28, 2013.

With this timepiece the Swiss watchmaker resurrects the fascination of the Enlightenment period for architecture and botany, with a cherub riding in a carriage pulled by a butterfly. This is a historical design drawn by one of the legendary automata produced by Pierre Jaquet Droz in the 18th century.

The cherub is an emblem of the Italian Renaissance and Baroque periods, while the butterfly serves as a universal symbol of beauty, lightness and freedom. The palace of Monaco is represented in the background painted tone on tone, endowing the scene with a certain realism. The Loving Butterfly is an echo of the values defended by Jaquer Droz: the right to innocence, the power of the imagination as well as confidence in one’s own dreams.

This design with its romantic and poetic naturalism decorates the face of the Petite Heure Minute. Jaquet Droz craftsmen combined their best skills to create this unique piece. Engraved and then painted, the gold decor was first worked like a bas-relief before being applied to the Grand Feu enamel dial. This technique endows this beautiful masterpiece with a unique sense of volume. The butterfly’s gold wire legs are suspended and wave slightly with each wrist movement. Housed in a 43 mm diameter yellow gold case, The Loving Butterfly has an exposed oscillating weight. The Only Watch name is engraved on the case back to remind the owner of the special event. 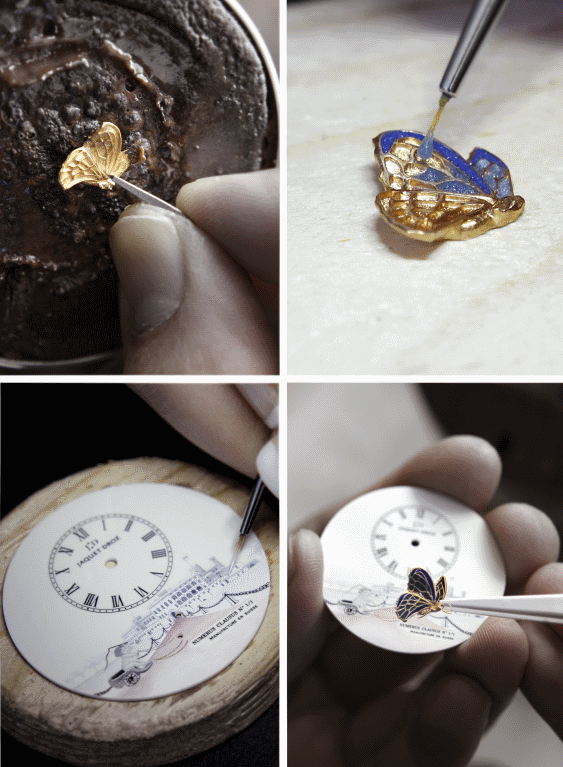 Presented worldwide since September, The Loving Butterfly will fly to the shores of the Mediterranean to be sold during the 5th edition of the Only Watch event in Monaco. Already synonymous with virtuoso watchmaking, the event also embodies Jaquet Droz’s philanthropic values, its support for cutting edge medical research and continued trust in a bright and serene future.