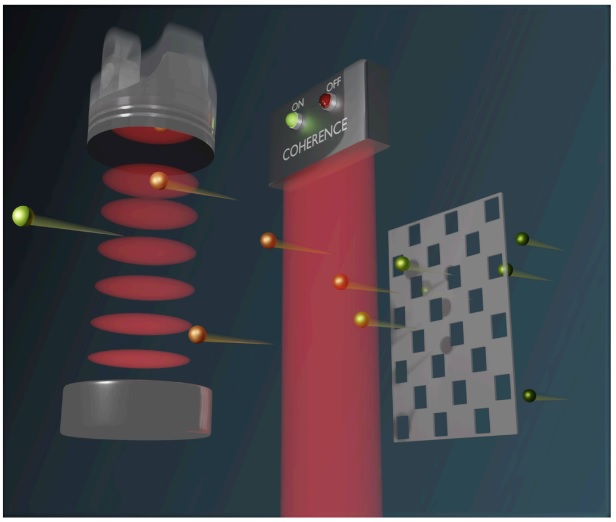 Researchers at Seoul National University in Korea have made the first superradiant quantum heat engine with its efficiency reaching almost 100%. In their engine, two-level atoms traversing a high-finesse cavity act as a heat reservoir while a photon gas generated by the atoms in the cavity serves as a working medium exerting radiation pressure on the cavity mirrors like pistons. Even with the single heat reservoir, by rapidly turning the quantum phase correlation on and off among atoms, thereby enabling and disabling superradiance, respectively, they could achieve a four-stroke engine cycle operating between 3800K and 150,000K of the effective engine temperature. Consequently, the engine efficiency reached up to 98%.

Quantum heat engines are heat engines based on quantum mechanical principles. There have been several theoretical proposals and experimental demonstrations of quantum engines using various physical systems such as trapped ions, nano-beams, nuclear spins, nitrogen-vacancy centers and cold atoms. A particular interest in this area of study is a quantum heat engine driven by a single heat reservoir with quantum coherence embedded. It is predicted that by using a bit of quantum coherence in the heat reservoir one can achieve an engine efficiency larger than the Carnot efficiency, which is considered the maximum efficiency one can achieve in heat engines based on classical thermodynamics. It is also predicted that by using superradiance one can enhance the engine output by making it grow nonlinearly with the number of atoms in the reservoir. 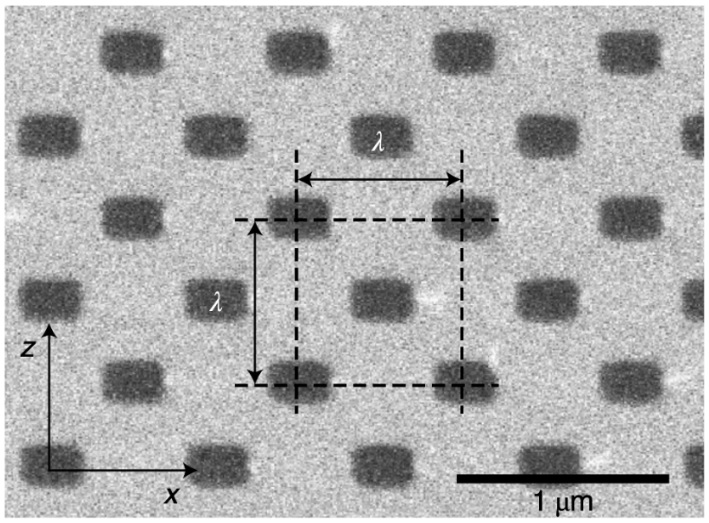 Figure 1: a, Experimental schematic. Atoms go through a nanohole-array aperture and are exposed to a traveling-wave pump field to be excited to superposition states. Quantum phase correlation can be turned on and off by the pump field. Atoms generate superradiance while the cavity expands and thermal photons while it contracts. b, Magnified view of the nanohole array aperture. The hole spacing equals the atomic transition wavelength.

In their superradiant photonic engine experiment, the ratio of the atomic excited-state population to the ground state population is much less than 1, so one can assign a reservoir temperature, at which the atoms in thermal equilibrium would have the same population ratio. Moreover, the researchers can also impose quantum coherence among atoms at will. It can be done by sending atoms through a nanohole-array aperture with a hole spacing equal to the atomic transition wavelength and exposing them to a traveling-wave pump field at the same wavelength as illustrated in Fig. 1. Atoms are then excited to a quantum superposition of ground and excited states with a common phase acquired from the pump field. The atomic transverse positions after the nanohole array aperture are aligned with the antinodes of the cavity. Consequently, the phase-coherent atoms can generate superradiance in the cavity, building up a large mean photon number there.

These photons then exert radiation pressure on the cavity mirrors with the pressure being proportional to the number of photons. One can turn off the superradiance by detuning the pump frequency from the cavity resonance. The atoms then generate thermal photons in the cavity with a small mean photon number. If the cavity expands while superradiance occurs and contracts while thermal photons are emitted, the net work done by the photon gas is nonzero and the amount of work is proportional to the photon number difference. A four-stroke engine cycle can be devised in this way as shown in Fig. 2. 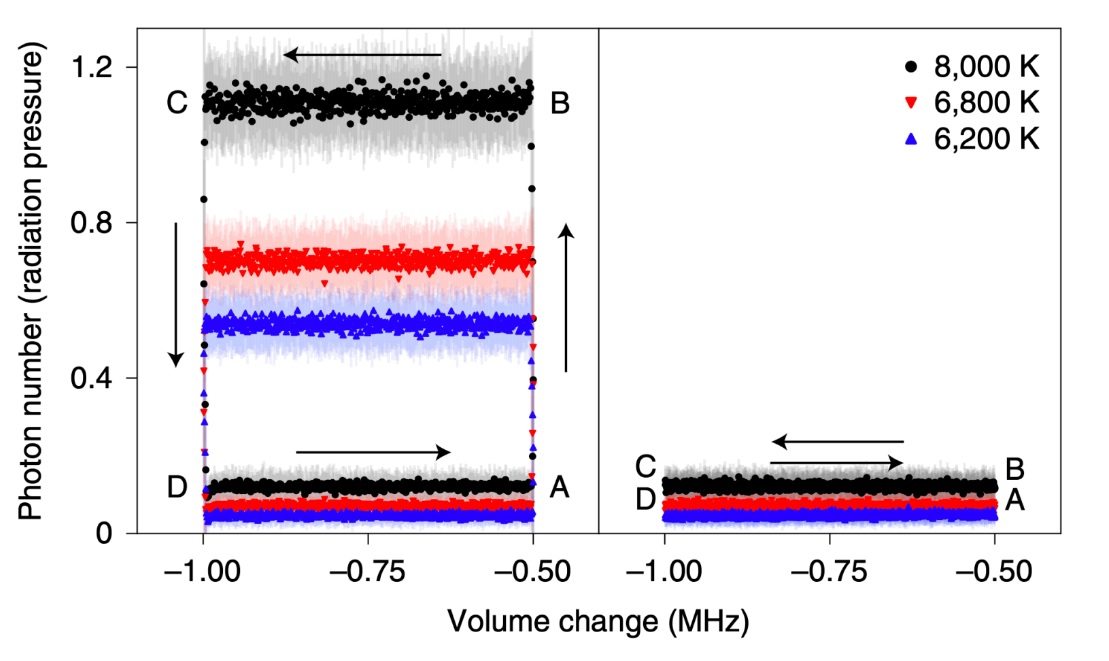 One may wonder where the energy come from and argue that there might be hidden energy cost so the efficiency might not exceed the Carnot efficiency. In the isochoric (constant-volume) process from A to B in Fig. 2, the atomic phase correlation is turned on, so the mean photon number quickly rises due to superradiance. In this process, energy (called ergotropy in quantum thermodynamics) is transferred from the atoms to the cavity field. In the other isochoric process, the same amount of ergotropy is returned to the atoms. During the expansion(contraction) phase, the energy in the cavity field remains unchanged, so the input(output) heat matches the work done by the engine during the expansion(contraction) phase. Therefore, the work per cycle comes from the energy transfer or the input heat coming from the ergotropy stored in the atomic superposition state. This energy input is accounted entirely in evaluating the engine performance, and therefore there is no hidden cost.

Figure 3: Observed engine temperature (a) and engine efficiency (b) with the mean number of atoms in the cavity.

Prof. Kyungwon An, who led the research team, said, “This is the first photonic quantum engine driven by a single heat reservoir with quantum coherence embedded, not to mention the first quantum engine using super-radiance as a mechanism to convert the quantum coherence to mechanical work”. He added, “Our work demonstrates a way to enhance quantum mechanical heat transfer and suggests a pathway to quantum-coherence driven mechanical devices”. The work was published in Nature Photonics on July 21, 2022.