This technology is expected to be applied to quality evaluation, nondestructive inspection, and future ultra-fast wireless communication

Hamamatsu’s breakthrough was achieved by analyzing the principle governing the generation of terahertz waves*1 which enhance the QCL’s*2 output power, and the configuration of the highly efficient external cavity*3 while using Hamamatsu’s advanced optical design technology.

This research results in generating narrow-band terahertz waves all while switching the frequency of just one QCL module. This technology will help in polymer material identification as well as boost accuracy in quality evaluation for non-destructive inspection of drugs, foods, and semiconductors containing components that absorb terahertz waves. The QCL module using this technology will also prove to be a key innovative device for achieving future ultra-high-speed wireless communication.

These research results were published by the Optica Publishing Group in the electronic version of the scientific journal “Photonics Research” on February 22nd. Part of this research was commissioned by the Japanese Ministry of Internal Affairs and Communications as a “Strategic Information and Communications R&D Promotion Program (SCOPE)” (No. JP195006001).

Development background
Just like other types of electromagnetic radiation, the specific components of a sample each absorb the terahertz waves at a different frequency. We can utilize this property for making quality evaluation and non-destructive analysis. Since terahertz waves are on an even higher frequency band than those for the 5G high-speed communication standard, they are the ideal choice for the 6G next-generation standard, now in its research phase.

In 2018, Hamamatsu leveraged it unique quantum structure design technology by developing a “terahertz nonlinear QCL”, based on an anti-crossed dual-upper-state design (AnticrossDAUTM). This technology can irradiate samples by switching the terahertz frequency to match the components within the sample. This enables to examine the absorbance with improved analysis accuracy. However, using only one module to switch the frequency of the semiconductor laser light sources was not yet possible. It was thanks to their research and development that Hamamatsu Photonics was able to provide a solution.

Research results overview
In this research, the researchers analyzed the principle by which QCL generates terahertz waves and optimized its internal structure. They achieved the latter by applying crystal growth technology and, the semiconductor process technology they accumulated over the years. They also studied the principle of terahertz wave propagation in QCL and found that the efficiency of terahertz wave generation could be improved. In the results, the device’s substrate is closely appressed to a high-resistivity silicon lens, they succeeded in boosting the output by over 5 times more than the previous terahertz nonlinear QCLs operating in the 1 THz frequency range. Then by applying their advanced optical design technology, they combined the new QCL with a well-designed diffraction grating*4 to configure a highly efficient external cavity. This led the researchers to achieve the world’s first QCL module that generates a narrow-band terahertz wave at any frequency in the range from 0.42 to 2 THz, by electrically controlling the diffraction grating to change its tilt.

Results from this research will prove useful in improving the accuracy of quality evaluation and non-destructive inspection of drugs, foods and, semiconductors containing components that absorb terahertz waves. Depending on the amounts and the frequency, the absorbance of each component can be measured while switching the frequency with one QCL module. Another possible application is the identification of polymer materials such as plastics, which were difficult to identify up until now. In the future, devising a heatdissipating structure for the QCL and operating the terahertz wave more stably and continuously will expand its applications. This will include submillimeter astronomy, for outer space observation with terahertz waves, as well as ultra-high-speed and high-capacity wireless communication over short distances.

Hamamatsu Photonics will continue to design and develop even smaller, fingertip-sized QCL modules by making maximum use of their in-house micro-electromechanical systems (MEMS) technology.

Method for switching the frequency 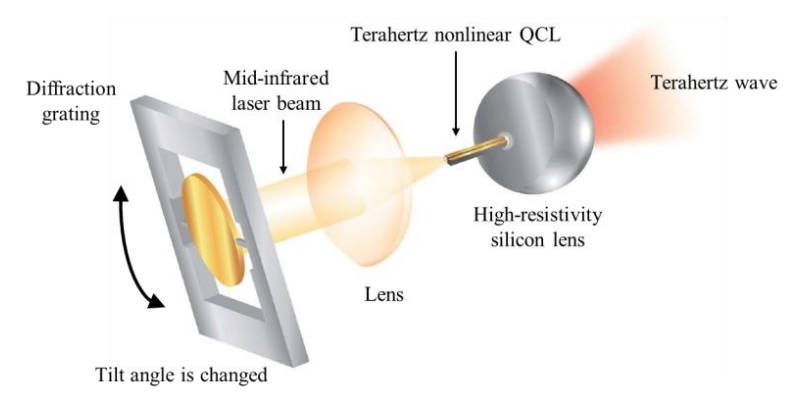 Hamamatsu’s researchers analyzed the principle of terahertz wave propagation in a terahertz nonlinear QCL and found that they can be generated more efficiently by applying the method, in which the QCL’ substrate is closely appressed to the high-resistivity silicon lens. They also optimized the internal structure by applying crystal growth technology and semiconductor process technology they have accumulated over long years. The result is a sub-milliwatt level peak output in the 1 THz frequency band which is more than five times higher than the previous nonlinear QCL.

2. World’s first QCL module with a tunable frequency range from 0.42 to 2 THz

Besides optimizing the material for the anti-reflection film formed on the terahertz nonlinear QCL end face, the researchers configured the cavity with a well-designed diffraction grating mounted outside the QCL.

By electrically controlling the tilt of the diffraction grating, which is the lowest frequency range among QCL operating at room temperatures, they obtained the first QCL module with a tunable frequency range. This QCL module can also operate while changing frequencies at high speeds.

*1: Terahertz waves are electromagnetic waves at a frequency around 1 THz and have properties intermediate between those of light and radio waves.

*2: QCL is a semiconductor laser light source that uses a special structure of the light-emitting layer. Unlike conventional lasers, QCL can produce high output power in a wavelength range from the mid-infrared to the farinfrared region.

*3: The external cavity is a resonator consisting of a diffraction grating mounted outside the semiconductor laser

*4: A diffraction grating is an optical element that disperses light at different wavelengths into a spectrum by utilizing
the fact that the angle at which light is diffracted differs for each wavelength.