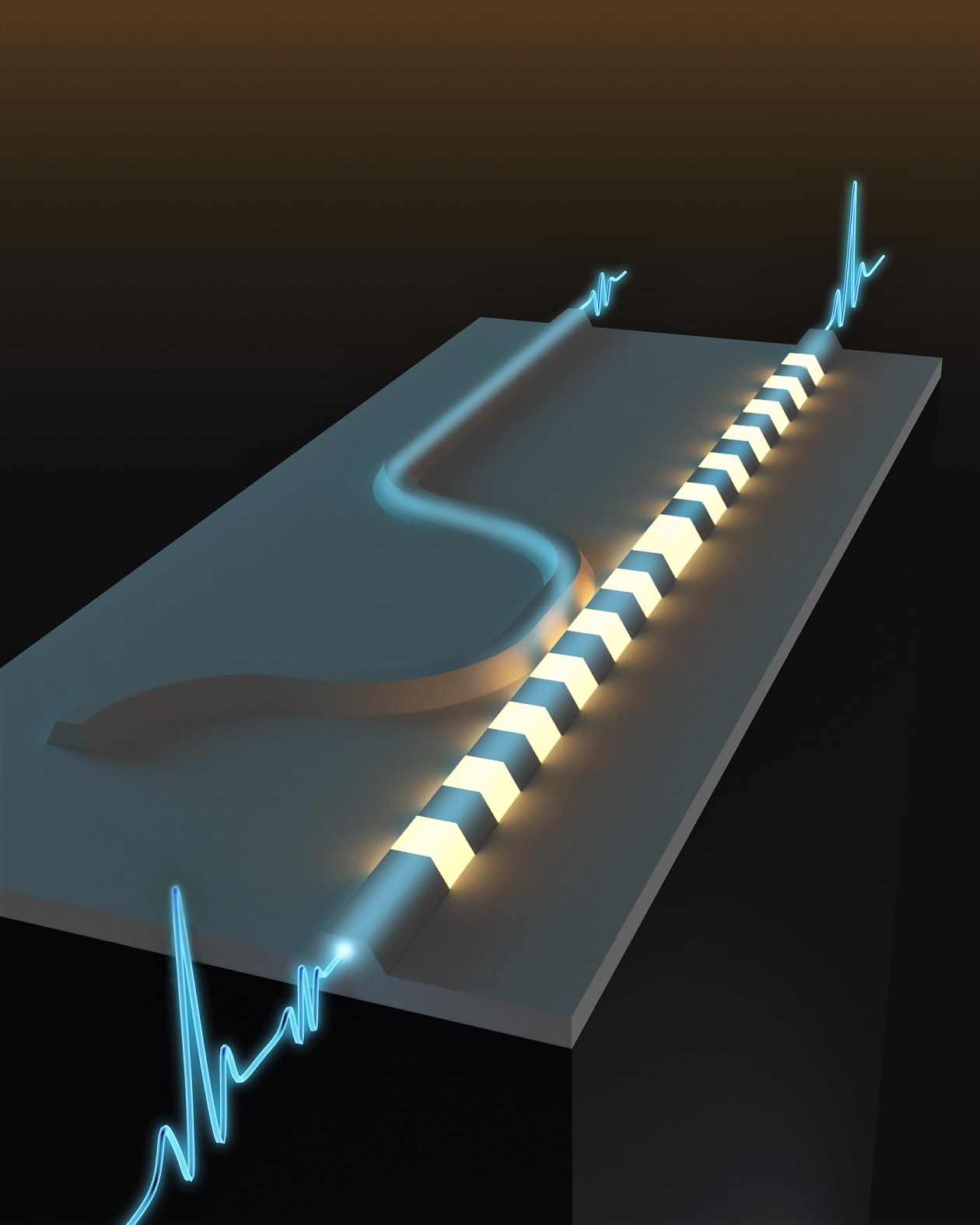 An artist's illustration of an optical switch, splitting light pulses based on their energies. Credit: Y. Wang, N. Thu, and S. Zhou

Engineers at Caltech have developed a switch—one of the most fundamental components of computing—using optical, rather than electronic, components. The development could aid efforts to achieve ultrafast all-optical signal processing and computing.

Optical devices have the capacity to transmit signals far faster than electrical devices by using pulses of light rather than electrical signals. That is why modern devices often employ optics to send data; for example, think of the fiberoptic cables that provide much faster internet speeds than conventional Ethernet cables.

The field of optics has the potential to revolutionize computing by doing more, at faster speeds, and with less power. However, one of the major limitations of optics-based systems at present is that, at a certain point, they still need to have electronics-based transistors to efficiently process the data.

Now, using the power of optical nonlinearity (more on that later), a team led by Alireza Marandi, assistant professor of electrical engineering and applied physics at Caltech, has created an all-optical switch. Such a switch could eventually enable data processing using photons. The research was published in the journal Nature Photonics on July 28.

Switches are among the simplest components of a computer. A signal comes into the switch and, depending on certain conditions, the switch either allows the signal to move forward or halts it. That on/off property is the foundation of logic gates and binary computation, and is what digital transistors were designed to accomplish. However, until this new work, achieving the same function with light has proved difficult. Unlike electrons in transistors, which can strongly affect each other's flow and thereby cause "switching," photons usually do not easily interact with each other.

Two things made the breakthrough possible: the material Marandi's team used, and the way in which they used it. First, they chose a crystalline material known as lithium niobate, a combination of niobium, lithium, and oxygen that does not occur in nature but has, over the past 50 years, proven essential to the field of optics. The material is inherently nonlinear: Because of the special way the atoms are arranged in the crystal, the optical signals that it produces as outputs are not proportional to the input signals.

While lithium niobate crystals have been used in optics for decades, more recently, advances in nanofabrication techniques have enabled Marandi and his team to create lithium niobate-based integrated photonic devices that allow for the confinement of light in a tiny space. The smaller the space, the greater the intensity of light with the same amount of power. As a result, the pulses of light carrying information through such an optical system could provide a stronger nonlinear response than would otherwise be possible.

Marandi and his colleagues also confined the light temporally. Essentially, they decreased the duration of light pulses, and used a specific design that would keep the pulses short as they propagate through the device, which resulted in each pulse having higher peak power.

The combined effect of these two tactics—the spatiotemporal confinement of light—is to substantially enhance the strength of nonlinearity for a given pulse energy, which means the photons now affect each other much more strongly.

The net result is the creation of a nonlinear splitter in which the light pulses are routed to two different outputs based on their energies, which enables switching to occur in less than 50 femtoseconds (a femtosecond is a quadrillionth of a second). By comparison, state-of-the-art electronic switches take tens of picoseconds (a picosecond is a trillionth of a second), a difference of many orders of magnitude.

The paper is titled "Femtojoule femtosecond all-optical switching in lithium niobate nanophotonics." Co-lead authors are Caltech postdoctoral scholar Qiushi Guo and graduate students Ryoto Sekine and Luis Ledezma. Caltech coauthors are postdoctoral scholar Rajveer Nehra; graduate students Arkadev Roy and Robert M. Gray; and Saman Jahani, who was a postdoctoral scholar at Caltech at the time of this research. Coauthors also include Devin J. Dean, who was a WAVE fellow at Caltech. Device nanofabrication was performed at the Kavli Nanoscience Institute (KNI) at Caltech. This research was funded by the Army Research Office (ARO), the National Science Foundation, JPL (which Caltech manages for NASA), and NTT Research.