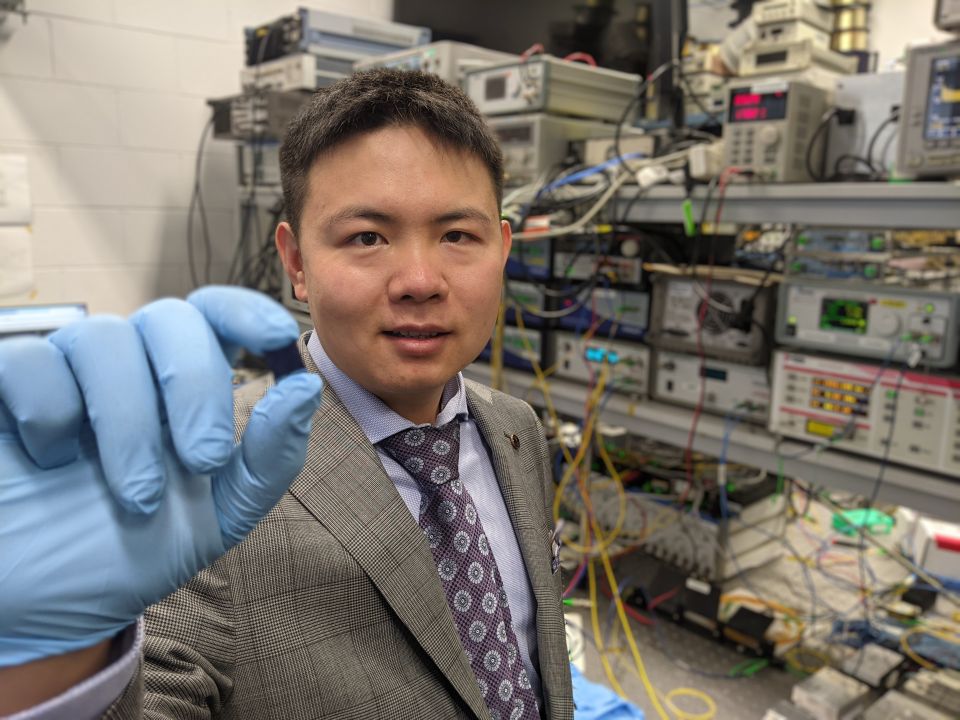 Dr Xingyuan (Mike) Xu with the integrated optical microcomb chip, which forms the core part of the optical neuromorphic processor.

An international team of researchers led by Swinburne University of Technology has demonstrated the world’s fastest and most powerful optical neuromorphic processor for artificial intelligence (AI), which operates faster than 10 trillion operations per second (TeraOPs/s) and is capable of processing ultra-large scale data. Published in the prestigious journal Nature, this breakthrough represents an enormous leap forward for neural networks and neuromorphic processing in general.

The team demonstrated an optical neuromorphic processor operating more than 1000 times faster than any previous processor, with the system also processing record-sized ultra-large scale images – enough to achieve full facial image recognition, something that other optical processors have been unable to accomplish.

“This breakthrough was achieved with ‘optical micro-combs', as was our world-record internet data speed reported in May 2020,” says Professor Moss, Director of Swinburne’s Optical Sciences Centre.

While state-of-the-art electronic processors such as the Google TPU can operate beyond 100 TeraOPs/s, this is done with tens of thousands of parallel processors. In contrast, the optical system demonstrated by the team uses a single processor and was achieved using a new technique of simultaneously interleaving the data in time, wavelength and spatial dimensions through an integrated micro-comb source.

Micro-combs are relatively new devices that act like a rainbow made up of hundreds of high-quality infrared lasers on a single chip. They are much faster, smaller, lighter and cheaper than any other optical source.

“In the 10 years since I co-invented them, integrated micro-comb chips have become enormously important and it is truly exciting to see them enabling these huge advances in information communication and processing. Micro-combs offer enormous promise for us to meet the world’s insatiable need for information,” says Professor Moss.

“This processor can serve as a universal ultrahigh bandwidth front end for any neuromorphic hardware —optical or electronic based — bringing massive-data machine learning for real-time ultrahigh bandwidth data within reach,” says co-lead author of the study, Dr Xu, Swinburne alum and postdoctoral fellow with the Electrical and Computer Systems Engineering Department at Monash University.

“We’re currently getting a sneak-peak of how the processors of the future will look. It’s really showing us how dramatically we can scale the power of our processors through the innovative use of microcombs,” Dr Xu explains.

RMIT’s Professor Mitchell adds, “This technology is applicable to all forms of processing and communications – it will have a huge impact. Long term we hope to realise fully integrated systems on a chip, greatly reducing cost and energy consumption”.

“Convolutional neural networks have been central to the artificial intelligence revolution, but existing silicon technology increasingly presents a bottleneck in processing speed and energy efficiency,” says key supporter of the research team, Professor Damien Hicks, from Swinburne and the Walter and Elizabeth Hall Institute.

He adds, “This breakthrough shows how a new optical technology makes such networks faster and more efficient and is a profound demonstration of the benefits of cross-disciplinary thinking, in having the inspiration and courage to take an idea from one field and using it to solve a fundamental problem in another.”

View the paper in full.