Quantum marbles in a bowl of light 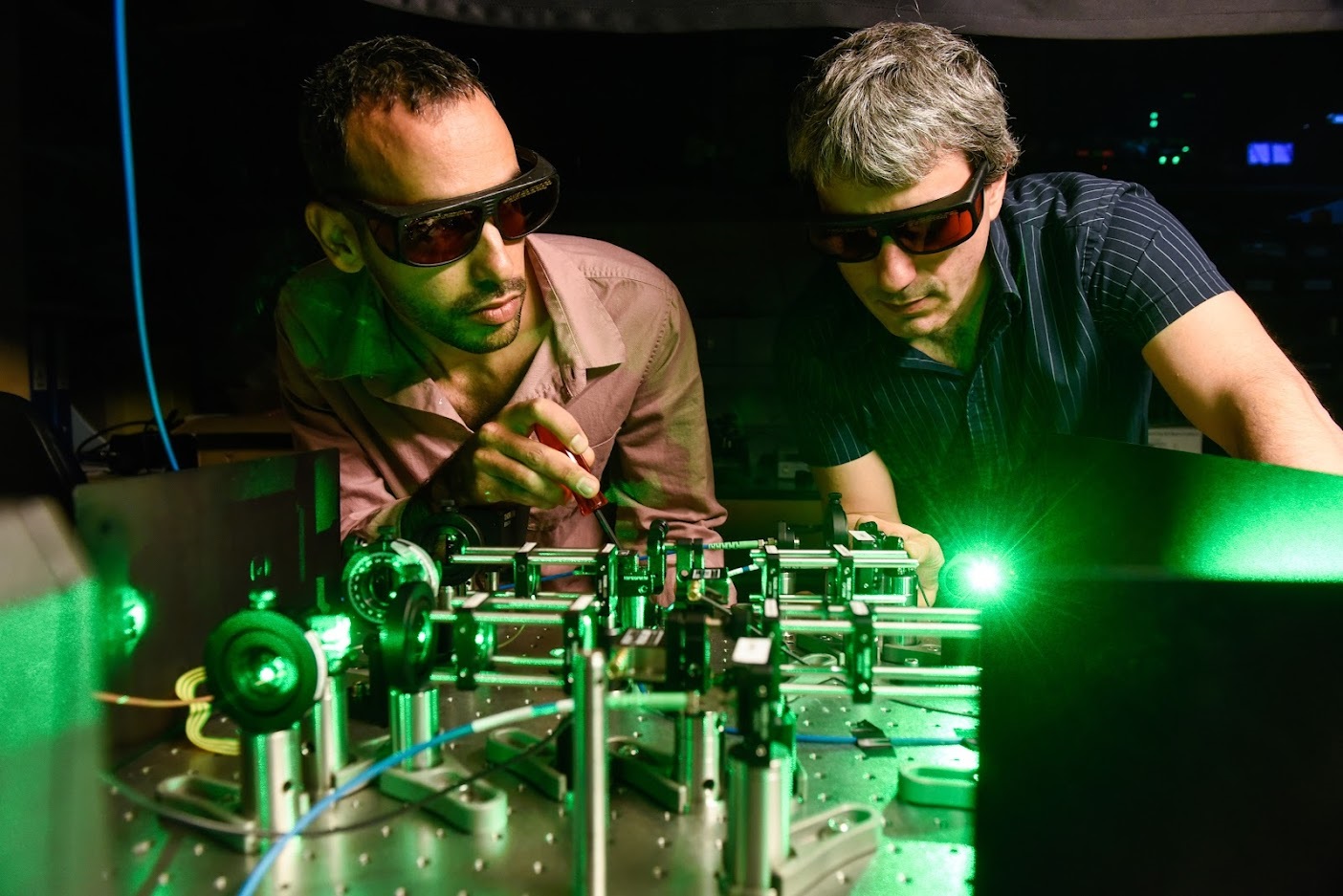 Which factors determine how fast a quantum computer can perform its calculations? Physicists at the University of Bonn and the Technion - Israel Institute of Technology have devised an elegant experiment to answer this question. The results of the study are published in the journal Science Advances.

Quantum computers are highly sophisticated machines that rely on the principles of quantum mechanics to process information. This should enable them to handle certain problems in the future that are completely unsolvable for conventional computers. But even for quantum computers, fundamental limits apply to the amount of data they can process in a given time.

The information stored in conventional computers can be thought of as a long sequence of zeros and ones, the bits. In quantum mechanics it is different: The information is stored in quantum bits (qubits), which resemble a wave rather than a series of discrete values. Physicists also speak of wave functions when they want to precisely represent the information contained in qubits.

In a traditional computer, information is linked together by so-called gates. Combining several gates allows elementary calculations, such as the addition of two bits. Information is processed in a very similar way in quantum computers, where quantum gates change the wave function according to certain rules.

Quantum gates resemble their traditional relatives in another respect: "Even in the quantum world, gates do not work infinitely fast," explains Dr. Andrea Alberti of the Institute of Applied Physics at the University of Bonn. "They require a minimum amount of time to transform the wave function and the information this contains." 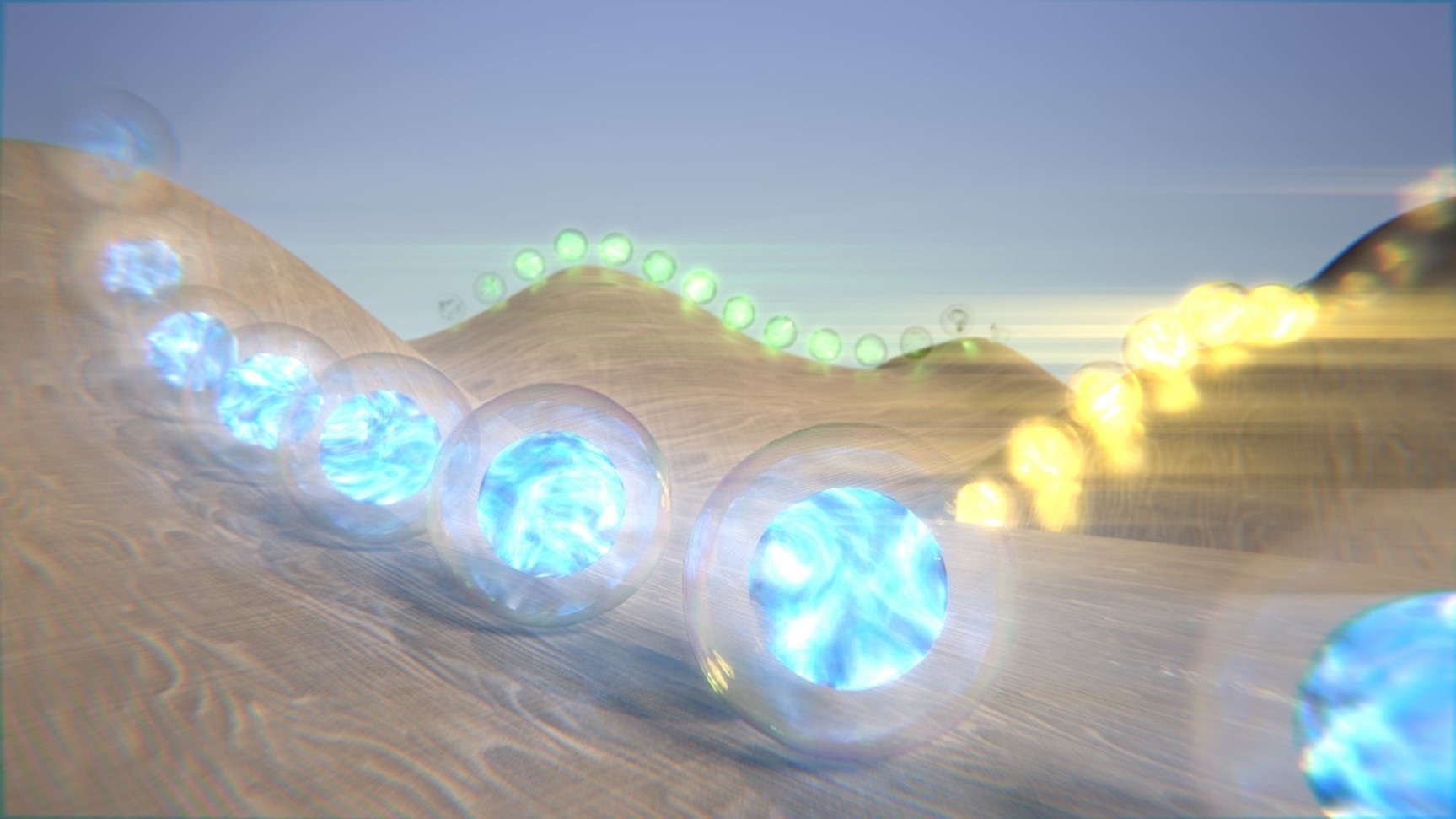 Quantum marbles in action - an artistic illustration of a matter wave rolling down a steep potential hill.

Quantum marbles in a bowl of light

More than 70 years ago, Soviet physicists Leonid Mandelstam and Igor Tamm deduced theoretically this minimum time for transforming the wave function. Physicists at the University of Bonn and the Technion have now investigated this Mandelstam-Tamm limit for the first time with an experiment on a complex quantum system. To do this, they used cesium atoms that moved in a highly controlled manner. "In the experiment, we let individual atoms roll down like marbles in a light bowl and observe their motion," explains Alberti, who led the experimental study.

Atoms can be described quantum mechanically as matter waves. During the journey to the bottom of the light bowl, their quantum information changes. The researchers now wanted to know when this "deformation" could be identified at the earliest. This time would then be the experimental proof of the Mandelstam-Tamm limit. The problem with this, however, is that in the quantum world, every measurement of the atom's position inevitably changes the matter wave in an unpredictable way. So, it always looks like the marble has deformed, no matter how quickly the measurement is made. "We therefore devised a different method to detect the deviation from the initial state," Alberti says.

For this purpose, the researchers began by producing a clone of the matter wave, in other words an almost exact twin. "We used fast light pulses to create a so-called quantum superposition of two states of the atom," explains Gal Ness, a doctoral student at the Technion and first author of the study. "Figuratively speaking, the atom behaves as if it had two different colors at the same time." Depending on the color, each atom twin takes a different position in the light bowl: One is high up on the edge and "rolls" down from there. The other, conversely, is already at the bottom of the bowl. This twin does not move - after all, it cannot roll up the walls and so does not change its wave function.

The physicists compared the two clones at regular intervals. They did this using a technique called quantum interference, which allows differences in waves to be detected very precisely. This enabled them to determine after what time a significant deformation of the matter wave first occurred.

By varying the height above the bottom of the bowl at the start of the experiment, the physicists were also able to control the average energy of the atom. Average because, in principle, the amount cannot be determined exactly. The "position energy" of the atom is therefore always uncertain. "We were able to demonstrate that the minimum time for the matter wave to change depends on this energy uncertainty," says Professor Yoav Sagi, who led the partner team at Technion: "The greater the uncertainty, the shorter the Mandelstam-Tamm time."

This is exactly what the two Soviet physicists had predicted. But there was also a second effect: If the energy uncertainty was increased more and more until it exceeded the average energy of the atom, then the minimum time did not decrease further - contrary to what the Mandelstam-Tamm limit would actually suggest. The physicists thus proved a second speed limit, which was theoretically discovered about 20 years ago. The ultimate speed limit in the quantum world is therefore determined not only by the energy uncertainty, but also by the mean energy.

"It is the first time that both quantum speed boundaries could be measured for a complex quantum system, and even in a single experiment," Alberti enthuses. Future quantum computers may be able to solve problems rapidly, but they too will be constrained by these fundamental limits.

The study was funded by the Reinhard Frank Foundation (in collaboration with the German Technion Society), The German Research Foundation (DFG), the Helen Diller Quantum Center at the Technion, and the German Academic Exchange Service (DAAD).