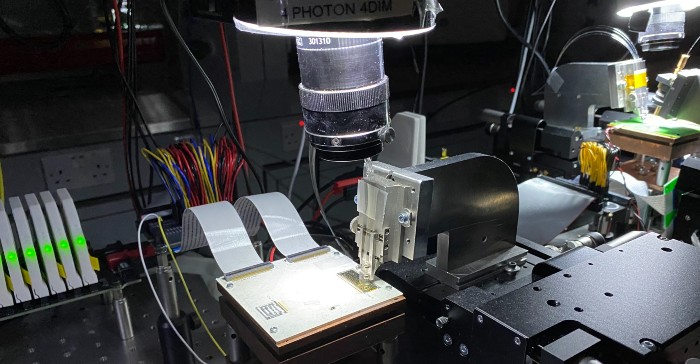 Researchers at DTU Fotonik have shown that they can teleport information between two microchips by utilizing a quantum mechanical entanglement of two photons. The experiment brings us one step closer to a faster and safer Internet.

Teleportation is probably best known from science fiction films like Star Trek, where people are instantaneously transported from one place to another. Physical teleportation still belongs to the world of make believe. However, together with English and Chinese researchers, quantum physicists from DTU Fotonik have now demonstrated something similar by teleporting photons—i.e. light particles—between two microchips. Instead of taking advantage of the classic method of data transfer to send an information-bearing photon between two chips, researchers have teleported information from one silicon chip to another utilizing a quantum mechanically entangled photon pair.

Photons connected in an entangled quantum state (also called entanglement, see more in box) know each other’s characteristics at any time—you cannot measure one without also changing the state of the other. This relationship can be used to exchange quantum information between the locations where the entangled photons are sent. In the long term, this technology could potentially be used to develop new types of completely secure internet connections where data manipulation en route cannot go undetected.

Even now, quantum physics can be used to send secret messages that no third party can listen to. While the technology is still in its infancy, there are companies that offer equipment for quantum mechanical exchange of encryption keys whereby data are sent as individual photons in different quantum states. Here, however, a direct optical fibre link is required between the two parties wanting to send secret messages to each other—and there are physical limitations to how long such a link can be. The record in the laboratory is 509 kilometres—but in practice the fibre is rarely longer than 100 kilometres. If users are hundreds of kilometres apart, the distance problem can be solved using so-called trusted nodes—authenticated stations—but this makes the connection slower, more expensive, and last but not least, less secure, as data are not protected at authenticated stations and can thus be hacked by intruders.

Entangled photons
A more robust and flexible infrastructure for quantum communication between a large number of users is therefore needed, and this is where the researchers’ recent demonstration of chip-to-chip quantum teleportation comes into play.

“In our chip, we can produce two photons that are in the entangled quantum state. We can then send one photon one way, and the other the other way. They then function as a single system, regardless of the distance between them. When you measure one photon, you change the common quantum state and thus determine the state of the other. In this way, we were able to use the entangled photons to transfer information from one chip to another,” explains Assistant Professor Davide Bacco, one of the four DTU researchers.

Quantum internet on the horizon
The fact that the technology can be implemented on silicon chips is a great advantage. Silicon has been used in the manufacture of computer microchips since the 1960s, and researchers can reuse production methods from the semiconductor industry—even if it is photons and not electrons that are to be manipulated—and once the design is in place, it will be easy and cheap to mass produce them.

The new quantum chips will thus be a valuable step on the road to an alternative internet where information is transferred according to the laws of quantum mechanics—not in the form of bits with a value of 0 or 1, but in quantum bits, which can be both 0 and 1 at the same time.

Such an internet will behave fundamentally differently from the internet we know, and it will make perfect sense if it is used to send tasks to a quantum computer and subsequently receive the results of the calculations in a way that allows input, output, and the calculation to be known only to the sender—e.g. a pharmaceutical company wanting to harness the quantum computer’s formidable computing power to develop new medicines and getting a central computer in the quantum cloud to do the job.

Similarly, the secure quantum connections will be valuable for internet-connected things—the so-called IoT, which is experiencing rapid growth.

At DTU’s Centre of Excellence for Silicon Photonics for Optical Communications, researchers are not only working on the hardware part of the new quantum-based networks—new ways of using quantum communication are also being developed here.  Just as it was impossible to predict what the internet would be used for 50 years ago, it is impossible to know how the quantum internet will impact our lives. That said, the potential is immense.

The groundbreaking experiment with quantum teleportation between microchips was carried out in Bristol in the UK—with chips designed and manufactured at DTU.