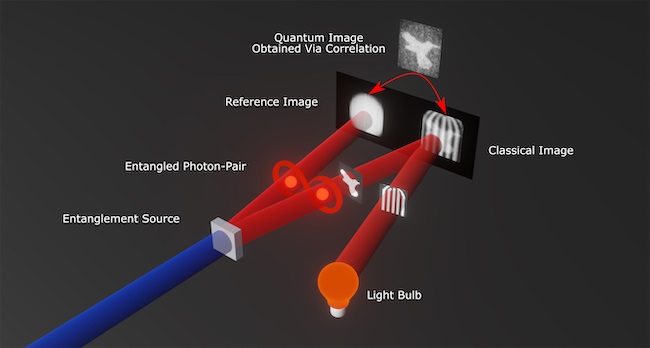 Physicists from the University of Glasgow’s Optics Group describe in a paper published today in Science Advances how they used a technique known as quantum illumination to image through noise.

A new imaging method which exploits the unique properties of quantum-entangled photons to reveal hidden information could help move forward the developing field of quantum radar.

Physicists from the University of Glasgow’s Optics Group describe in a paper published today in Science Advances how they used a technique known as quantum illumination to image through noise.

Light is comprised of photons and the method in which an image is captured classically is to use all of the photons detected on the camera to form an image.

When enough background noise is added to the image, either through natural phenomena or by a deliberate attempt to obscure the image from an observer, it can become impossible to separate the ‘true’ image from the noise.

Using quantum illumination the quantum correlations between entangled photons may be used to allow an observer to preferentially filter out false information and noise from an image, allowing the ‘true’ image to be revealed.

One potential application for the process is quantum radar, which would use quantum light to make it impossible for objects to be obscured from radar detection by spoofing a signal – a valuable advance for both military and civilian operations.

The University of Glasgow research team’s newly-developed system aims to simulate a situation where a ‘true’ image must be separated from a ‘spoof’ image.

It uses a special non-linear crystal to generate entangled photon-pairs. Of these photon-pairs one photon illuminates the ‘true’ image, in this case a bird, prior to detection by the camera, while the second one is detected directly on the camera and acts as a reference for the purposes of exploiting the correlations.

At the same time, photons produced by a conventional light bulb illuminate the ‘spoof’ image’, in this case a cage, and are detected on the same region of the camera as the bird thereby resulting in the classical image comprising a hybrid ‘false’ image of the bird imprisoned within a cage.

Through exploiting correlations between the entangled photon-pairs, the correlated events are preferentially selected and the noise rejected. The end result is a quantum image in which quantum bird is released from its classical cage of noise.

Thomas Gregory of the Optics Group at the University of Glasgow said: “We’ve constructed a system in which the correlations in position between pairs of entangled photons may be exploited to improve the resulting image when compared to the corresponding classical case. We’ve also shown that, contrary to what one might expect, this relative improvement increases with increasing levels of noise that are introduced.

"The achievements of this work in developing a system that uses a multipixel camera detector is a great step towards developing a quantum system that is capable of performing imaging in an optically hostile environment.”

The paper, titled ‘Imaging Through Noise With Quantum Illumination', is published in Science Advances.

The research was funded by the Professor Jim Gatheral quantum technology studentship, the EPSRC, European Union under the Marie Skłodowska-Curie Action, the European Research Council, and the Leverhulme Trust.

Link to paper in Science Advances