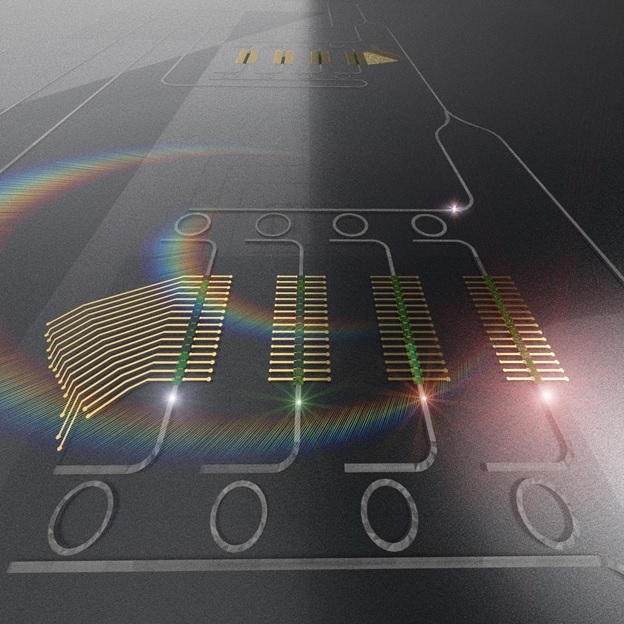 After several months of preparation, market analysis and deep discussions with experts in the field, Optius is coming into the world with an ambitious goal: to solve major bottlenecks of the electronics chip industry. The new Montreal-based startup is a TandemLaunch’s portfolio company who received its pre-seed investment earlier this year. Its team of engineers and scientists brings together the required experience in Integrated Photonics, CMOS electronics and AI computation.

TandemLaunch is a unique startup foundry and seed fund that works with driven entrepreneurs to turn research from the world’s best universities into exceptional technology companies. Mohamed Fouda and Emanuel Peinke joined TandemLaunch in 2019 and after looking into several promising optical technologies to develop the optical device they had in mind, they finally reached an agreement with researchers from George Washington University in the United States. The research paper where the technology is described was published last week has had an impressive reception from both the technology and the scientific communities. It has been featured in several news outlets, including The Independent, EETimes, Science Daily, EurekAlert! and many more.

Now Optius envisions building an optical processing chip that uses light propagation in optical waveguides to atteint superior computation performances. The Photonic Tensor Core (PTC) on which the chip is based, is able to carry out general mathematical operations such as vector multiplications and matrix-vector multiplications while achieving 2-3 orders higher performance for processing optical data feeds than an electrical counterpart. These computations are the cornerstones for convolutional and deep Neural Networks and even if the idea of optical computing has been around for decades, it was only recently that started to see actual chip implementations.

The growth of Machine Learning and Artificial Intelligence has caused significant demand for more powerful computation devices that can process intensive amounts of data. As existing electronic computation chips are already struggling to meet that demand and are rapidly approaching their physical limits, Optius recognizes that a paradigm shift in how computation is performed is needed.

This energy requirement can be greatly reduced with the use of photonic structures to perform computations and data transmission. Optical components already dominate the area of data transmission in data centers and have the potential to do the same in computing systems and processing chips. The extremely fast computation would allow real-time decision making within a reasonable power budget. Optius foresees applications for Artificial Intelligence, Big Data, High Performance Computing, Autonomous Driving and High-frequency trading.