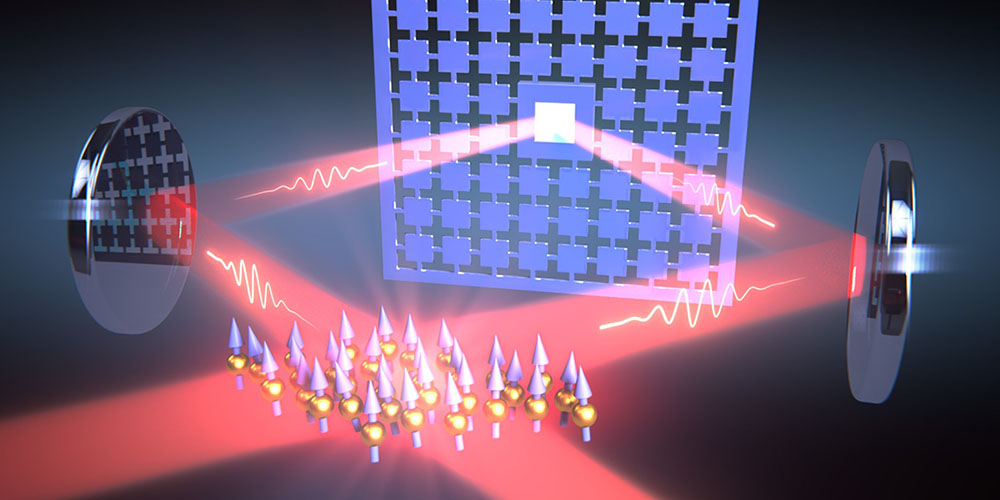 A loop of laser light connects the oscillations of a nanomechanical membrane (back) and the spin of a cloud of atoms (front). (Illustration: University of Basel, Department of Physics)

For the first time, researchers have succeeded in creating strong coupling between quantum systems over a greater distance. They accomplished this with a novel method in which a laser loop connects the systems, enabling nearly lossless exchange of information and strong interaction between them. In the scientific journal Science, the physicists from the University of Basel and University of Hanover reported that the new method opens up new possibilities in quantum networks and quantum sensor technology.

Quantum technology is currently one of the most active fields of research worldwide. It takes advantage of the special properties of quantum mechanical states of atoms, light, or nanostructures to develop, for example, novel sensors for medicine and navigation, networks for information processing and powerful simulators for materials sciences. Generating these quantum states normally requires a strong interaction between the systems involved, such as between several atoms or nanostructures.

Until now, however, sufficiently strong interactions were limited to short distances. Typically, two systems had to be placed close to each other on the same chip at low temperatures or in the same vacuum chamber, where they interact via electrostatic or magnetostatic forces. Coupling them across larger distances, however, is required for many applications such as quantum networks or certain types of sensors.

A team of physicists, led by Professor Philipp Treutlein from the Department of Physics at the University of Basel and the Swiss Nanoscience Institute (SNI), has now succeeded for the first time in creating strong coupling between two systems over a greater distance across a room temperature environment. In their experiment, the researchers used laser light to couple the vibrations of a 100 nanometer thin membrane to the motion of the spin of atoms over a distance of one meter. As a result, each vibration of the membrane sets the spin of the atoms in motion and vice versa.

A loop of light acts as a mechanical spring

The experiment is based on a concept that the researchers developed together with the theoretical physicist Professor Klemens Hammerer from the University of Hanover. It involves sending a beam of laser light back and forth between the systems. “The light then behaves like a mechanical spring stretched between the atoms and the membrane, and transmits forces between the two,” explains Dr. Thomas Karg, who carried out the experiments as part of his doctoral thesis at the University of Basel. In this laser loop, the properties of the light can be controlled such that no information about the motion of the two systems is lost to the environment, thus ensuring that the quantum mechanical interaction is not disturbed.

The researchers have now succeeded in implementing this concept experimentally for the first time and used it in a series of experiments. “The coupling of quantum systems with light is very flexible and versatile,” explains Treutlein. “We can control the laser beam between the systems, which allows us to generate different types of interactions that are useful for quantum sensors, for example.”

A new tool for quantum technologies

In addition to coupling atoms with nanomechanical membranes, the new method might also be used in several other systems; for example, when coupling superconducting quantum bits or solid-state spin systems used in quantum computing research. The new technique for light-mediated coupling could be used to interconnect such systems, creating quantum networks for information processing and simulations. Treutlein is convinced: “This is a new, highly useful tool for our quantum technology toolbox.”

The experiments conducted by the researchers in Basel were funded by the European Research Council as part of the project MODULAR, and by the SNI PhD School