New approach featured on the front cover of the latest issue of Advanced Optical Materials. 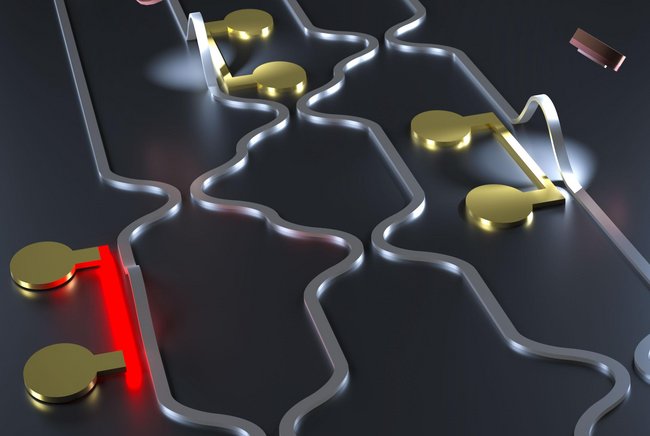 Modern society relies on technologies with electronic integrated circuits (IC) at their heart, but these may prove to be less suitable in future applications such as quantum computing and environmental sensing. Photonic integrated circuits (PICs), the light-based equivalent of electronic ICs, are an emerging technology field that can offer lower energy consumption, faster operation, and enhanced performance. However, current PIC fabrication methods lead to large variability between fabricated devices, resulting in limited yield, long delays between the conceptual idea and the working device, and lack of configurability. Researchers at Eindhoven University of Technology have devised a new process for the fabrication of PICs that addresses these critical issues, by creating novel reconfigurable PICs in the same way that the emergence of programmable logic devices transformed IC production in the 1980s.

Photonic integrated circuits (PICs) – the light-based equivalent of electronic ICs – carry signals via visible and infrared light. Optical materials with adjustable refractive index are essential for reconfigurable PICs as they allow for more accurate manipulation of light passing through the materials, leading to better PIC performance.

Current programmable PIC concepts suffer from issues such as volatility and/or high optical signal losses – both of which negatively affect a material’s ability to keep its programmed state. Using hydrogenated amorphous silicon (a-Si:H), a material used in thin-film silicon solar cells, and the associated Staebler-Wronski effect (SWE), which describes how the optical properties of a-Si:H can be changed via light exposure or heating, researchers at Eindhoven University of Technology have designed a new PIC fabrication process that addresses the shortfalls of current techniques and could lead to the emergence of universal programmable PICs. 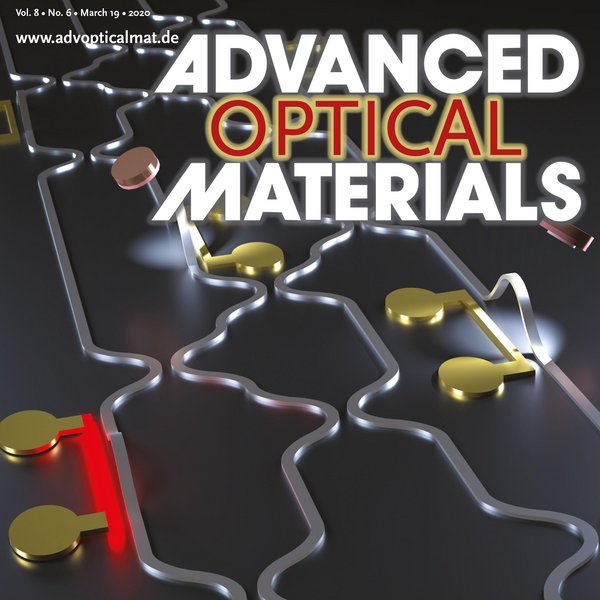 According to Oded Raz, Associate Professor at the Department of Electrical Engineering and research lead for this project, this approach could be of paramount importance for the field of PICs. “This is the world’s first demonstration of a reconfigurable PIC, where the material chosen for making the integrated optical circuit is being programmed”. Mahir Asif Mohammed also notes that the yield from existing approaches for the fabrication of PICs is typically very low. “Our method can significantly improve this yield”.

This revolutionary new approach could herald a wave of further investigations on reconfigurable PICs and it has further advantages. “Most importantly, in comparison to current methods, the time to prototype is much shorter and much more accurate”, says Raz. “As we continue to work on the method, we predict that the time to prototype will continue to decrease”, adds Mohammed.

The researchers also point out that heaters can be placed on a pre-light exposed device to allow the user to program a PIC device as desired. The same heaters can also reset the device and return it to a state that can be easily reprogrammed. “Our approach promotes reusable and sustainable use of materials”, says Mohammed.

Crucially, as pointed out by Raz, “This approach allows the user to easily program the functionality of a PIC and to concurrently correct for small errors in the fabrication process. You can just tune the functionality and it’s there!”

To assess the effectiveness of light exposure and heating a-Si:H to tune its optical properties, the researchers first considered a proof-of-concept experiment where they studied changes in the refractive index of a thin layer of a-Si:H on a silicon substrate. The material experienced cycles of heating (for four hours in the dark in a nitrogen atmosphere) and light soaking (via a tunable laser in the near-infrared range) treatments. The experiment showed a reversible refractive index change of about 0.001 – a key requirement for the fabrication of reconfigurable PICs.

Next a reconfigurable optical switch based on a micro-ring resonator (MRR) which was subject to cycles of light soaking and heating treatments also showed repeatable reversibility. And finally to better understand the cause of the reversible refractive index changes, the researchers examined variations in the structure of a 1-dimensional membrane where the main contributor to the switching states of the MRR device is shown to be metastable volumetric expansion.

You can find the full issue of Advanced Optical Materials here. In addition, you can find a short description of the paper and the cover image here.