Researchers have generated a wide range of colours from a single laser after discovering a new process for achieving so-called ‘supercontinuum generation’. 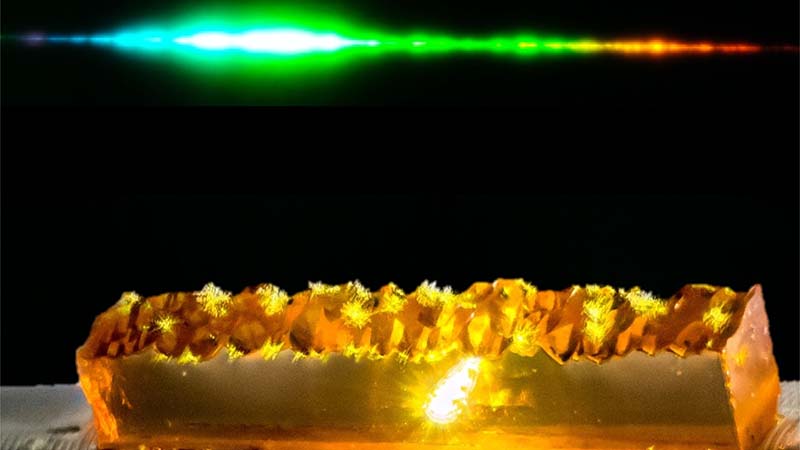 Supercontinuum generation is when intense laser light of one colour travels within a material, like glass, and broadens into a spectrum of colours.

The effect lets scientists produce light at colours tailored to particular applications in sectors like bioimaging, optical communications and fundamental studies of materials.

Until now, there were two ways to create a supercontinuum. A special optical fibre, around 10% of the width of a human hair, could be used to concentrate light to a very high intensity, over lengths of a few metres.

Alternatively, even more powerful light from an amplified laser—of the kind invented by the 2019 Nobel Laureates Strickland and Mourou—could be tightly focused into ordinary glass.

These traditional approaches come with disadvantages, associated either with the size, complexity and cost of using an extremely high-energy laser, or with the precise and fragile alignment needed to force light into an optical fibre only two-thousandths of a millimetre in diameter.

Photonics experts from Heriot-Watt have demonstrated a new method that combines the best of both worlds: a colourful supercontinuum from a bulk material using only moderate-energy lasers. The breakthrough has been reported in the leading journal Optica.

Professor Derryck Reid from the Institute of Photonics and Quantum Sciences said, “We’ve shown that combining a simple laser with a special, nonlinear crystal can create a supercontinuum directly.

“We’ve removed the need for either a high-power laser or delicate coupling of light into tiny optical fibres.

“We illuminate the crystal with light from an infrared laser, some of which is converted to visible green light. This in turn generates more green light at a slightly longer wavelength, becoming first yellow, then orange and working all the way out to the red.

“The weaker edges of the light can generate green at longer and longer wavelengths. This has never been reported before.”

Professor Reid and his team say further work is required to determine whether the effect is specific to the special gallium phosphide crystal they used and whether it can be further amplified.

Professor Reid said: “This is really promising. We think we can make the spectrum of the light wider and more intense by optimising the properties of the crystal.

“Visible supercontinua are already widely used in life sciences imaging and spectroscopy, but are limited by the properties of special optical fibres. Our new technique could offer a convenient and compact alternative to these existing light sources.