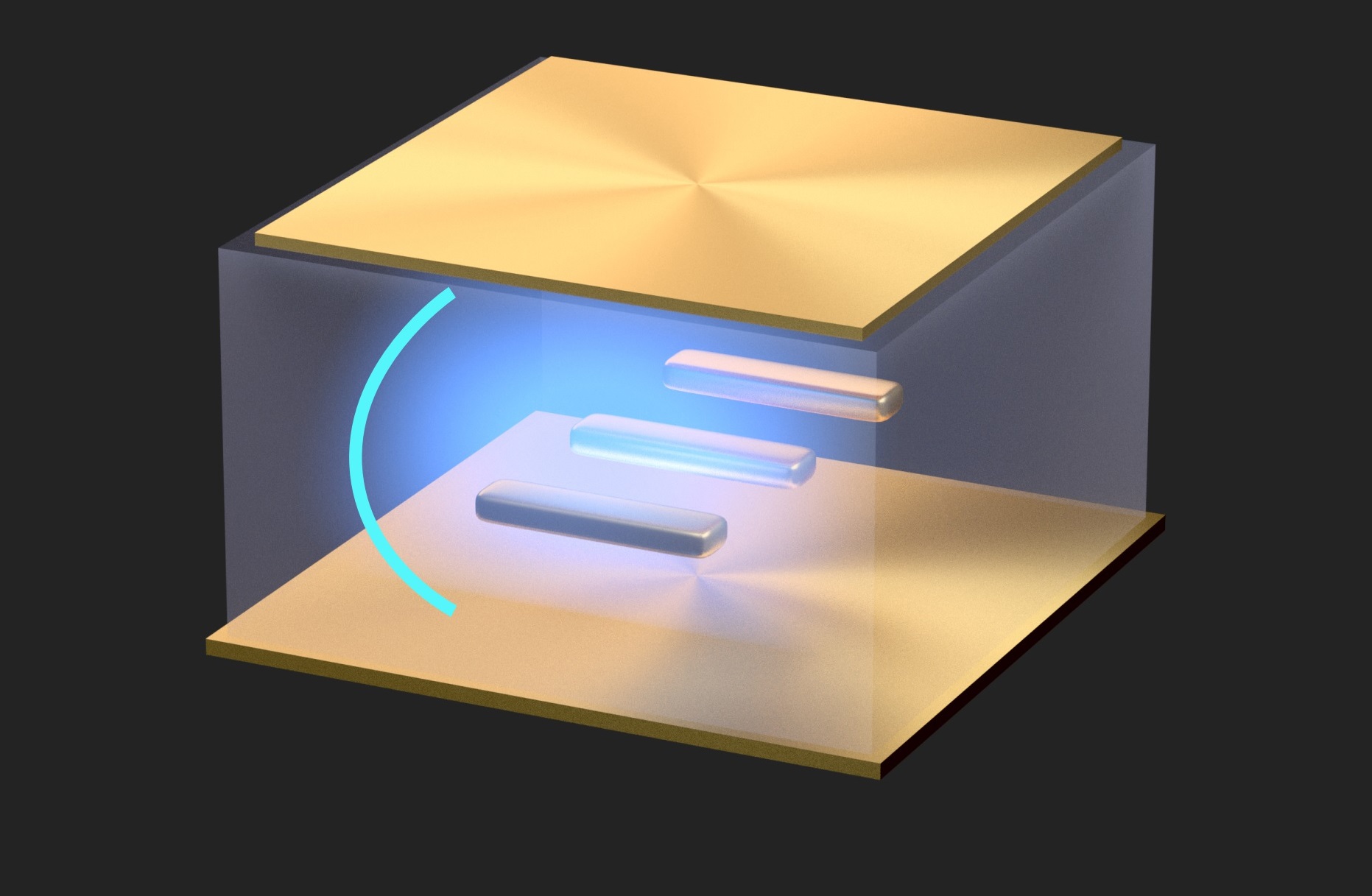 Researchers have shown that it is possible to create a controllable ultrastrong light-matter coupling at room temperature. The interaction is realised within a tiny system consisting of two gold mirrors separated by a small distance and plasmonic gold nanorods. The discovery is of importance for fundamental research and might pave the way for advances within, for example, light sources, nanomachinery, and quantum technology. Photographer: Illustration: Denis Baranov, Chalmers University of Technology.

Physicists at Chalmers University of Technology in Sweden, together with colleagues in Russia and Poland, have managed to achieve ultrastrong coupling between light and matter at room temperature. The discovery is of importance for fundamental research and might pave the way for advances within, for example, light sources, nanomachinery, and quantum technology.

A set of two coupled oscillators is one of the most fundamental and abundant systems in physics. It is a very general toy model that describes a plethora of systems ranging from guitar strings, acoustic resonators, and the physics of children’s swings, to molecules and chemical reactions, from gravitationally bound systems to quantum cavity electrodynamics.

The degree of coupling between the two oscillators is an important parameter that mostly determines the behaviour of the coupled system. However, the question is rarely asked about the upper limit by which two pendula can couple to each other – and what consequences such coupling can have.

The newly presented results, published in Nature Communications, offer a glimpse into the domain of the so called ultrastrong coupling, wherein the coupling strength becomes comparable to the resonant frequency of the oscillators. The coupling in this work is realised through interaction between light and electrons in a tiny system consisting of two gold mirrors separated by a small distance and plasmonic gold nanorods. On a surface that is a hundred times smaller than the end of a human hair, the researchers have shown that it is possible to create controllable ultrastrong interaction between light and matter at ambient conditions – that is, at room temperature and atmospheric pressure.

”We are not the first ones to realise ultrastrong coupling. But generally, strong magnetic fields, high vacuum and extremely low temperatures are required to achieve such a degree of coupling. When you can perform it in an ordinary lab, it enables more researchers to work in this field and it provides valuable knowledge in the borderland between nanotechnology and quantum optics,” says Denis Baranov, a researcher at Chalmers University of Technology and the first author of the scientific paper.

To understand the system the authors have realised, one can imagine a resonator, in this case represented by two gold mirrors separated by a few hundred nanometers, as a single tone in music. The nanorods fabricated between the mirrors affect how light moves between the mirrors and change their resonance frequency. Instead of just sounding like a single tone, in the coupled system the tone splits into two: a lower pitch, and a higher pitch.

The energy separation between the two new pitches represents the strength of interaction. Specifically, in the ultrastrong coupling case, the strength of interaction is so large that it becomes comparable to the frequency of the original resonator. This leads to a unique duet, where light and matter intermix into a common object, forming quasi-particles called polaritons. The hybrid character of polaritons provides a set of intriguing optical and electronic properties.

The number of gold nanorods sandwiched between the mirrors controls how strong the interaction is. But at the same time, it controls the so-called zero-point energy of the system. By increasing or decreasing the number of rods, it is possible to supply or remove energy from the ground state of the system and thereby increase or decrease the energy stored in the resonator box.

The discovery allows researchers to play with the laws of nature

What makes this work particularly interesting is that the authors managed to indirectly measure how the number of nanorods changes the vacuum energy by “listening” to the tones of the coupled system (that is, looking at the light transmission spectra through the mirrors with the nanorods) and performing simple mathematics. The resulting values turned out to be comparable to the thermal energy, which may lead to observable phenomena in the future.

“A concept for creating controllable ultrastrong coupling at room temperature in relatively simple systems can offer a testbed for fundamental physics. The fact that this ultrastrong coupling “costs” energy could lead to observable effects, for example it could modify the reactivity of chemicals or tailor van der Waals interactions. Ultrastrong coupling enables a variety of intriguing physical phenomena,” says Timur Shegai, Associate Professor at Chalmers and the last author of the scientific article.

In other words, this discovery allows researchers to play with the laws of nature and to test the limits of coupling.

“As the topic is quite fundamental, potential applications may range. Our system allows for reaching even stronger levels of coupling, something known as deep strong coupling. We are still not entirely sure what is the limit of coupling in our system, but it is clearly much higher than we see now. Importantly, the platform that allows studying ultrastrong coupling is now accessible at room temperature,” says Timur Shegai.

More on the research and the scientific paper

The nanofabrication was performed at Chalmers. The interactions between light and matter were observed by using infrared microscopy.

The research at Chalmers was funded by the Swedish Research Council.