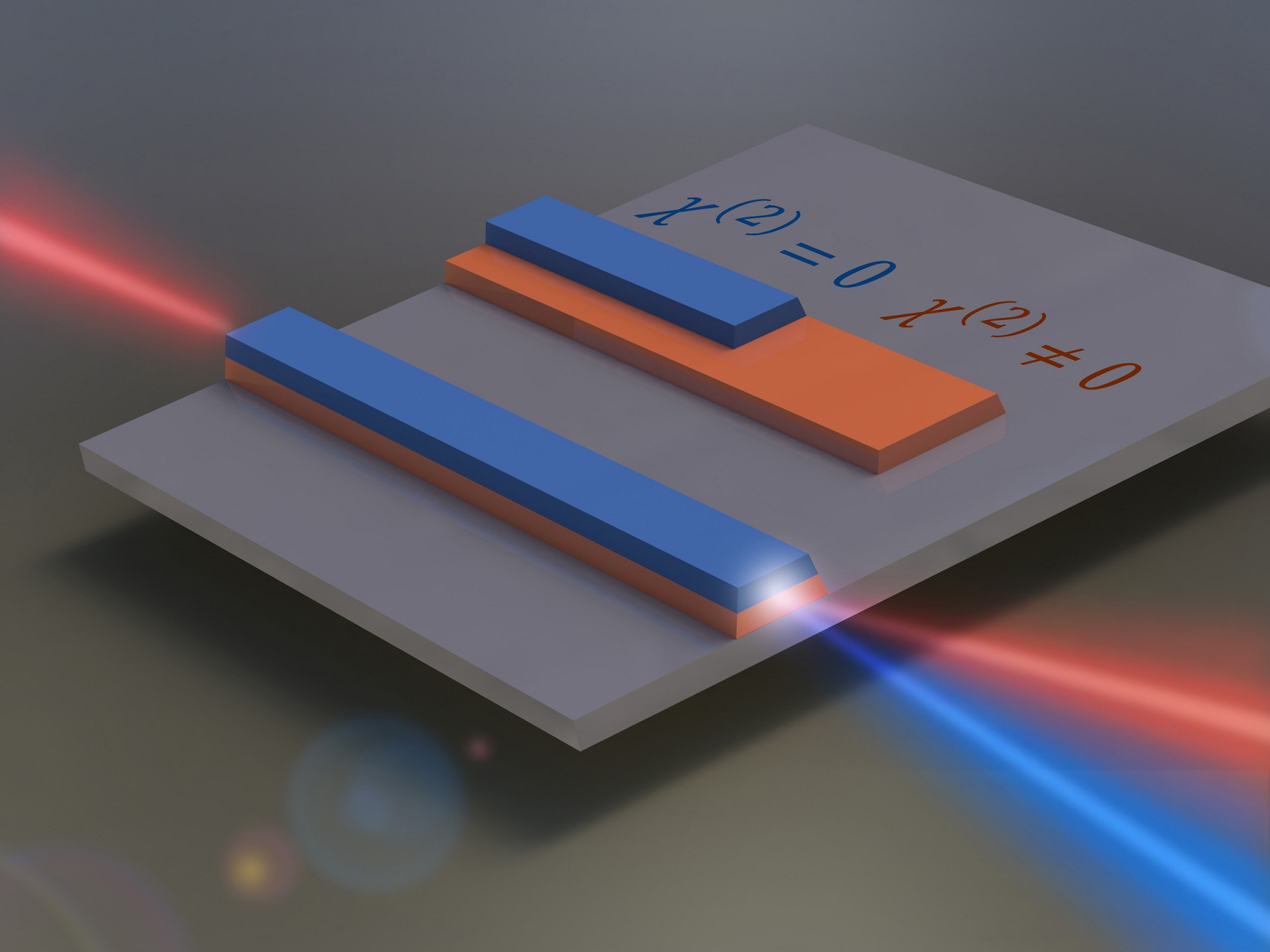 Graphical representation of second-harmonic generation in a semi-nonlinear nanophotonic waveguide.

Recently, researchers from the University of Rochester have proposed and demonstrated a novel concept for integrated nonlinear photonics: semi-nonlinear nanophotonic waveguides. This type of waveguides exhibit broken spatial symmetry in the optical nonlinearity, which can achieve high-efficiency wavelength conversion on photonic chips based on various materials.

Lasing wavelengths are limited by the gain media of lasers, which hurdles many applications that require coherent radiation at unconventional wavelengths. By harnessing optical nonlinearities (especially the quadratic nonlinearity χ(2)), optical parametric generation processes can happen, leading to wavelength conversion that extends the spectrum of coherent light sources. Wavelength converters have been widely applied in frequency metrology, optical microscopy, and quantum information processing, to name a few.

What are the challenges?

Nonlinear optical parametric generation relies critically on phase matching between the optical wavelengths involved, which needs careful dispersion management to overcome material and geometrical dispersion. Quasi-phase matching in domain-engineered waveguides can provide efficient wavelength conversion, but requires nonlinear gratings only achievable in a handful of materials. On the other hand, modal phase matching between different-order modes is a common approach to facilitate wavelength conversion, particularly in integrated photonic devices with small mode areas. However, poor mode overlap between the interacting modes leads to out-of-phase, counteracting contributions to the nonlinear gain, which prevents these devices from higher conversion efficiencies promised by the tight optical confinement.

How did they do it?

This type of waveguides, semi-nonlinear nanophotonic waveguides, have a core consisting of two high-index materials, one with a large χ (2) nonlinearity, and the other with a vanished χ(2). By breaking the spatial symmetry of the optical nonlinearity, the mode overlap between phase-matched different-order modes can be optimized, resulting in dramatically improved conversion efficiencies, compared with conventional monolithic nonlinear photonic chips. In order to generate 775-nm-wavelength light with a 1550-nm-wavelength pump, the researchers designed a semi-nonlinear waveguide with lithium niobate as the nonlinear medium and amorphous titanium oxide as the linear component, leading to an increase of more than one order of magnitude in the second-harmonic generation efficiency, compared with quasi-phase-matched bulk lithium niobate or modal-phase-matched monolithic thin-film lithium niobate waveguides. The designed waveguide is validated by experimental measurements.

“Domain engineering, via periodic poling or orientation-patterned growth, has been successful in high-efficiency quasi-phase-matched wavelength conversion, although applicable to only a small portion of nonlinear optical materials. Now we may use a universal concept to extend this success to modal-phase-matched devices,” says Rui Luo, the lead author of this study, who is a PhD student at The Institute of Optics at the University of Rochester.

“Semi-nonlinear waveguides may open up many novel functionalities based on a variety of integrated nonlinear photonic platforms, with the high efficiency enabling low power consumption,” says Rui Luo. “Furthermore, the nonlinear medium can have a nonlinear gain while the linear medium only has a linear loss, which can potentially be useful for non-Hermitian photonics.”

The research, titled “Semi-nonlinear nanophotonic waveguides for highly efficient second-harmonic generation”, was published in Laser & Photonics Reviews and featured on the front cover of the March 2019 issue.