Generation of light in a photon-number quantum superposition 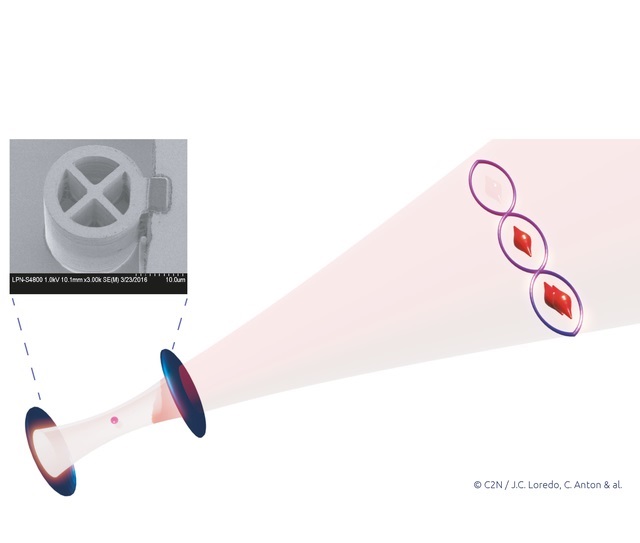 Figure: Schematic representation of the experiment. A quantum dot coupled to an optical microcavity (in inset a real image of the device) emits light in a state that is simultaneously a single photon, two photons, and no photon at all: a quantum superposition of photon-numbers. Copyright C2N / J.C. Loredo, C. Anton & al.

Physicists at C2N have demonstrated for the first time the direct generation of light in a state that is simultaneously a single photon, two photons, and no photon at all. They showed that the same kind of light emitters used for decades are also able to generate these quantum states, and expect that this holds true for any kind of atomic system.

Quantum superposition is a property of quantum physics that allows objects to exist simultaneously in different states. A famous theoretical example is the Schrödinger’s cat which is both dead and alive. Let us imagine an object trying to find the exit of a maze. In the classical realm, it will try every path, one at the time, until it finally finds the exit. In the quantum world, however, superposition allows the object to try all different paths simultaneously, therefore finding the exit much faster. For light, superposition has been shown in several of its properties. For instance, in its polarization, where the electromagnetic field of a single-photon oscillates both vertically and horizontally; or in path, taking upon all possible trajectories inside interferometers, the photonic versions of a maze. Superposition has been achieved even in time, with photons existing simultaneously at earlier and later moments.

However, creating light in a state that is simultaneously a single photon, two photons, or no photon at all, in other words a quantum superposition of “photon-numbers”, has remained elusive. Some complex experiments had already managed to obtain these superposition states a few times, but it had never been achieved on demand, which means with success at every experimental run. Moreover, it was not known whether direct emitters of these states existed. In a work published in Nature Photonics in August 2019, researchers at the Centre de Nanosciences et de Nanotechnologies – C2N (CNRS / University Paris-Saclay) and the Institut Néel (CNRS, Grenoble), have demonstrated for the first time the on-demand generation of light in a quantum superposition of photon-numbers.

The researchers studied the emission of an artificial atom, a semiconductor quantum dot inserted in an optical microcavity, a technology that has recently provided the most efficient single photon sources. By performing a coherent excitation of the quantum dot with optical pulses, they showed that the quantum coherence in the atomic state is preserved through the process of spontaneous emission and imprinted onto the emitted photonic state, generating a quantum superposition of zero, one, and two photons.

Such observations, never seen before in any atomic system, demonstrate that artificial atoms like quantum dots are now controlled to such a point that they behave as the systems described in textbooks. These new quantum states of light based on the coherent superposition of photon-number states open exciting paths for designing and implementing new schemes in quantum communication and computation.