The Beam of Invisibility

A new cloaking technology has been developed at TU Wien: a special kind of material is irradiated from above in such a way that another beam of light can pass completely uninhibited. 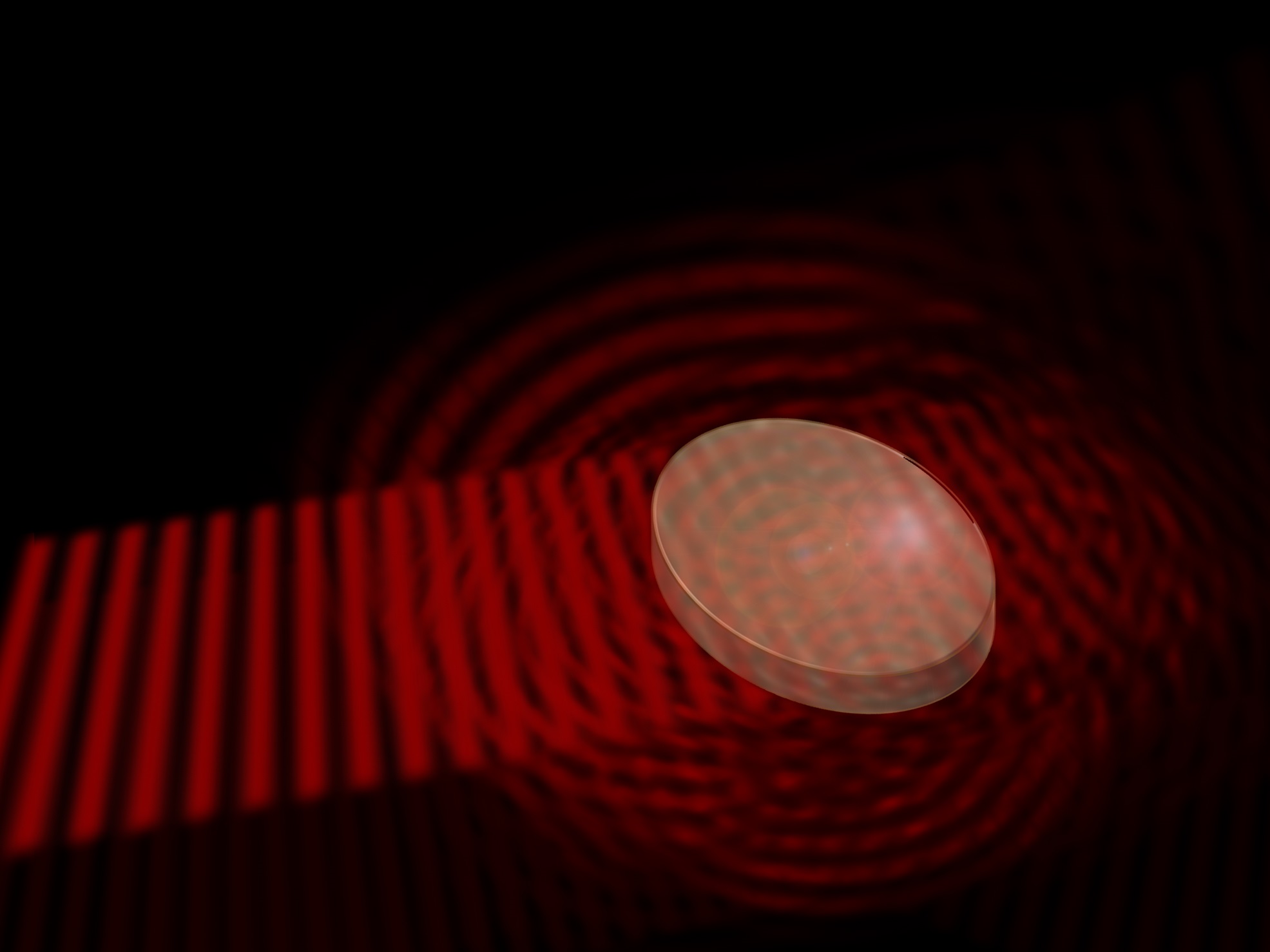 How do we make an object invisible? Researchers from TU Wien (Vienna), together with colleagues from Greece and the USA, have now developed a new idea for a cloaking technology. A completely opaque material is irradiated from above with a specific wave pattern – with the effect that light waves from the left can now pass through the material without any obstruction. This surprising result opens up completely new possibilities for active camouflage. The idea can be applied to different kinds of waves, it should work with sound waves just as well as with light waves. Experiments are already in the planning.

Outwitting the Scattering of Light
“Complex materials such as a sugar cube are opaque, because light waves inside them are scattered multiple times”, says Professor Stefan Rotter (TU Wien). “A light wave can enter and exit the object, but will never pass through the medium on a straight line. Instead, it is scattered into all possible directions.”

For years many different attempts have been made to outwit this kind of scattering, creating a “cloak of invisibility”. Special materials have been worked out, for example, which are able to guide light waves around an object. Alternatively, also experiments have been performed with objects that can emit light by themselves. When an electronic display sends out exactly the same light as it absorbs in the back, it can appear invisible, at least when looked at in the right angle.

At TU Wien a more fundamental approach has now been chosen. “We did not want to reroute the light waves, nor did we want to restore them with additional displays. Our goal was to guide the original light wave through the object, as if the object was not there at all”, says Andre Brandstötter, one of the authors of the study. “This sounds strange, but with certain materials and using our special wave technology, it is indeed possible.” 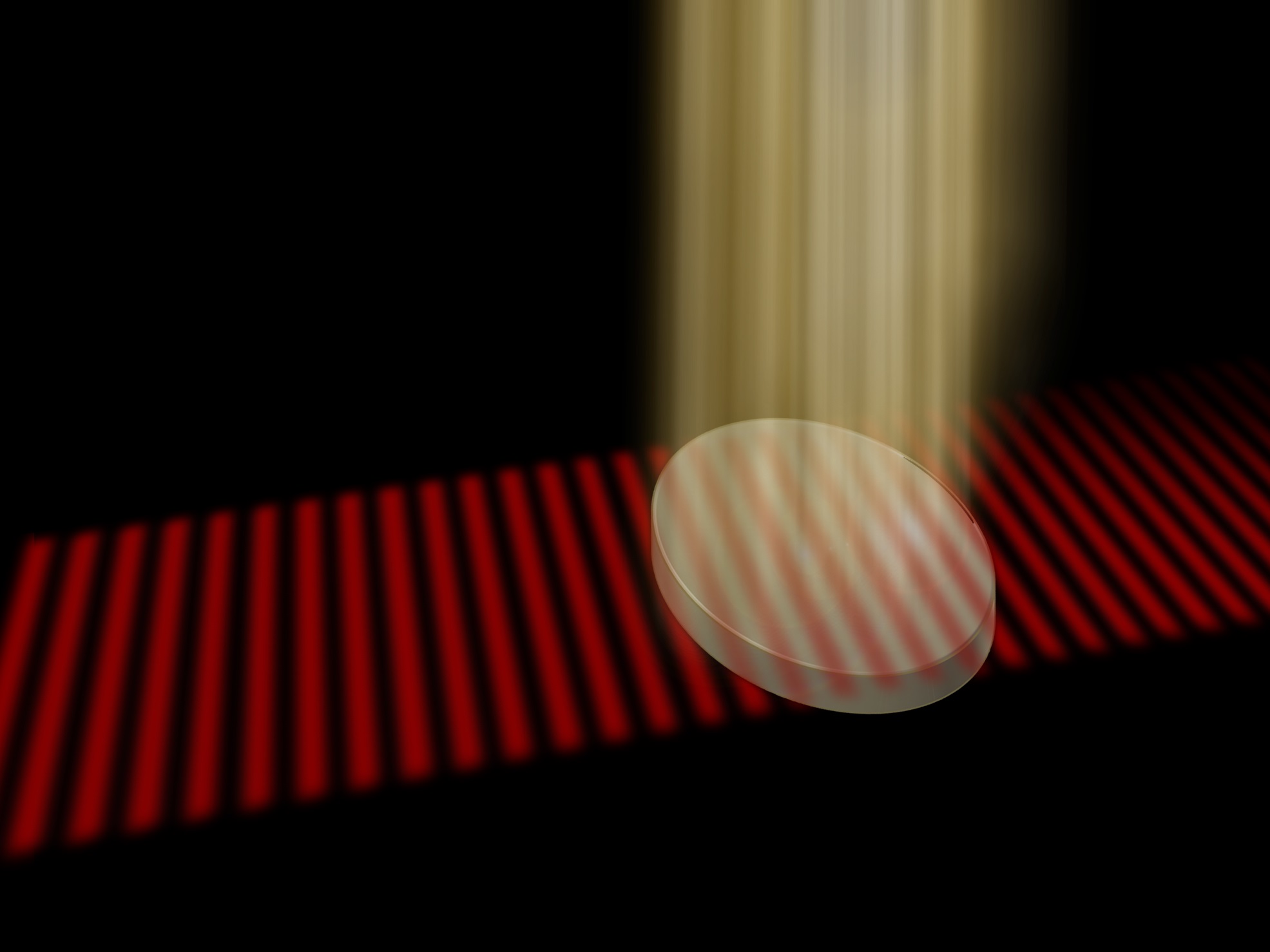 The material is irradiated with a specially designed pattern, the wave from the left can pass through the object completely unperturbed.

The Laser Material
The team at TU Wien has spent years working on optically active materials, which are used for building lasers. To make the laser shine, energy has to be supplied by means of a pump beam. Otherwise, the laser material behaves just like any other material – it absorbs part of the incident light.

“The crucial point is to pump energy into the material in a spatially tailored way such that light is amplified in exactly the right places, while allowing for absorption at other parts of the material”, says Professor Konstantinos Makris from the University of Crete (previously TU Wien). “To achieve this, a beam with exactly the right pattern has to be projected onto the material from above – like from a standard video projector, except with much higher resolution.”
If this pattern perfectly corresponds to the inner irregularities of the material which usually scatter the light, then the projection from above can effectively switch off the scattering, and another beam of light travelling through the material from one side can pass without any obstruction, scattering or loss.

“Mathematically, it is not immediately obvious that it is at all possible to find such a pattern”, says Rotter. “Every object we want to make transparent has to be irradiated with its own specific pattern – depending on the microscopic details of the scattering process inside. The method we developed now allows us to calculate the right pattern for any arbitrary scattering medium.”

Light or Sound
Computer simulations have shown that the method works. Now the idea should be confirmed in experiments. Stefan Rotter is confident that this will be successful: “We are already discussing with experimentalists how this could be done. As a first step, we may test this technology with sound instead of light waves. Experimentally, they are easier to handle, and from a mathematical point of view, the difference does not matter significantly.”