Black holes on an electronic chip 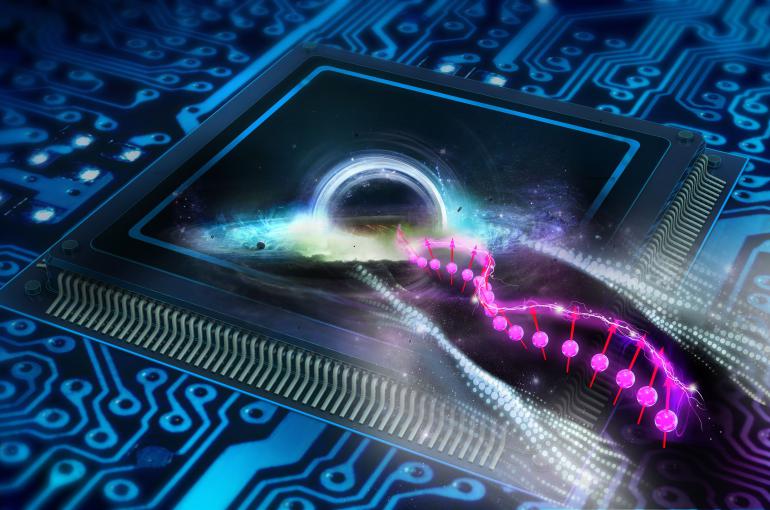 Eindhoven professor Rembert Duine has proposed a way to simulate black holes on an electronic chip. This makes it possible to study fundamental aspects of black holes in a laboratory on earth. Additionally, the underlying research may be useful for quantum technologies. Duine (also working at Utrecht University) and colleagues from Chile published their results today in Physical Review Letters.

“Right now, it’s purely theoretical,” says Duine, “but all the ingredients already exist. This could be happening in a lab one or two years from now.” One possibility is in the group of Physics of Nanostructures in the Department of Applied Physics. According to Duine, in these labs experiments are being done that are necessary to create this type of black holes.

Black holes in space are so dense that nothing can escape their gravitational pull once it passes a point of no return called the event horizon. The researchers have now found a way to make such points of no return for spin waves, fluctuations that propagate in magnetic materials. When an electric current runs through the material, the electrons drag these waves along.

If you pass such a current through a wire that is thick on one end and thin on the other, the electrons flow faster on the thin end, just like water flows faster through a narrow hose. The flow of electrons on the thin end of the wire can be so fast that the spin waves that are dragged along cannot flow in the opposite direction anymore. The point where this happens along the wire is a point of no return for the spin waves, making it a black hole event horizon.

Points of no return have been investigated before in other types of systems, but never before on electronic chips. “The best-known experiment involves waves in a tank of flowing water,” says Duine. “But you can’t do quantum mechanics with that. Recently, experiments have been done with Bose-Einstein condensates, but those only work near absolute zero. What’s nice about our proposal is that it should eventually work in normal circumstances.”

Everywhere in the universe, pairs of particles and antiparticles continuously appear and disappear. If this happens near the horizon of a black hole, one of the particles in the pair is sometimes swallowed by the black hole, leaving the other particle to escape and radiate away. This so-called Hawking radiation is so weak that it is almost impossible to observe in outer space. However, simulating the black hole on an electronic chip makes it possible to study this effect in higher temperatures, which makes the radiation easier to detect.

The particles in the pairs that cause Hawking radiation are quantum mechanically entangled: their properties are so closely intertwined that the resulting behaviour cannot be described by classical physics. Entanglement is one of the key ingredients of quantum technologies such as quantum computers. “This research will allow us to make entangled pairs of spin waves that span both sides of a point of no return,” says Duine. “And building those black holes on chips means that we can perhaps use this entanglement in electronic devices.”