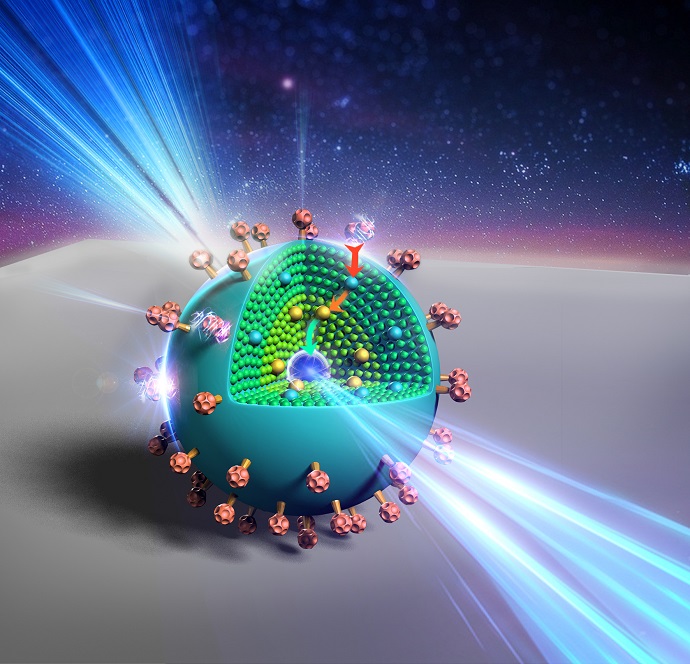 The particle’s innovation lies in its layers: a coating of organic dye, a neodymium-containing shell, and a core that incorporates ytterbium and thulium. Together, these strata convert invisible near-infrared light to higher energy blue and UV light with record-high efficiency, a trick that could improve the performance of technologies ranging from deep-tissue imaging and light-induced therapy to security inks used for printing money.

When it comes to bioimaging, near-infrared light could be used to activate the light-emitting nanoparticles deep inside the body, providing high-contrast images of areas of interest. In the realm of security, nanoparticle-infused inks could be incorporated into currency designs; such ink would be invisible to the naked eye, but glow blue when hit by a low-energy laser pulse — a trait very difficult for counterfeiters to reproduce.

“It opens up multiple possibilities for the future,” says Tymish Ohulchanskyy, deputy director of photomedicine and research associate professor at the Institute for Lasers, Photonics, and Biophotonics (ILPB) at the University at Buffalo.

“By creating special layers that help transfer energy efficiently from the surface of the particle to the core, which emits blue and UV light, our design helps overcome some of the long-standing obstacles that previous technologies faced,” says Guanying Chen, professor of chemistry at Harbin Institute of Technology and ILPB research associate professor.

“Our particle is about 100 times more efficient at ‘upconverting’ light than similar nanoparticles created in the past, making it much more practical,” says Jossana Damasco, a UB chemistry PhD student who played a key role in the project. 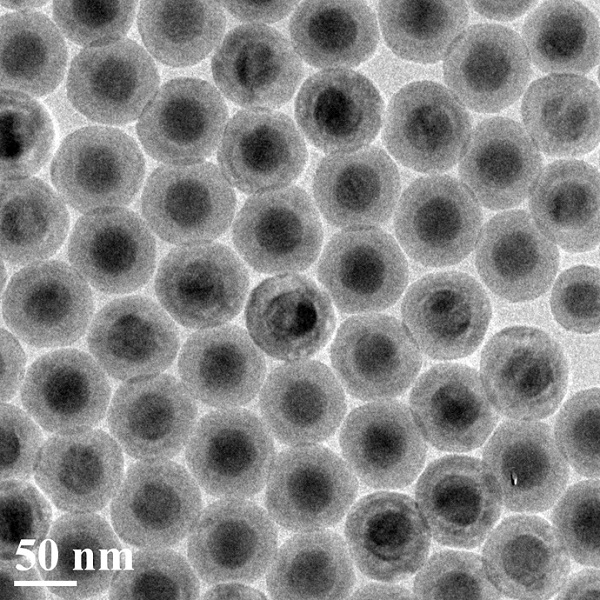 A transmission electron microscopy image of the new nanoparticles, which convert invisible near-infrared light to higher energy blue and UV light with high efficiency. Each particle is about 50 nanometers in diameter.
Credit: Institute for Lasers, Photonics and Biophotonics, University at Buffalo

Peeling back the layers

Converting low-energy light to light of higher energies isn’t easy to do. The process involves capturing two or more tiny packets of light called “photons” from a low-energy light source, and combining their energy to form a single, higher-energy photon.

The onionesque nanoparticle performs this task beautifully. Each of its three layers fulfills a unique function:

So why not just use the core? Why add the dye and neodymium layer at all?

As Ohulchanskyy and Chen explain, the core itself is inefficient in absorbing photons from the outside world. That’s where the dye comes in.

Once you add the dye, the neodymium-containing layer is necessary for transferring energy efficiently from dye to core. Ohulchanskyy uses the analogy of a staircase to explain why this is: When molecules or ions in a material absorb a photon, they enter an “excited” state from which they can transfer energy to other molecules or ions. The most efficient transfer occurs between molecules or ions whose excited states require a similar amount of energy to obtain, but the dye and ytterbium ions have excited states with very different energies. So the team added neodymium — whose excited state is in between that of the dye and thulium’s — to act as a bridge between the two, creating a “staircase” for the energy to travel down to reach emitting thulium ions.

The research was funded by the Air Force Office of Scientific Research, the National Science Fund for Distinguished Young Scholars, the International Cooperation Project in the Ministry of Science and Technology in China, the Program for Basic Research Excellent Talents in Harbin Institute of Technology, and the Fundamental Research Funds for the Central Universities in China.