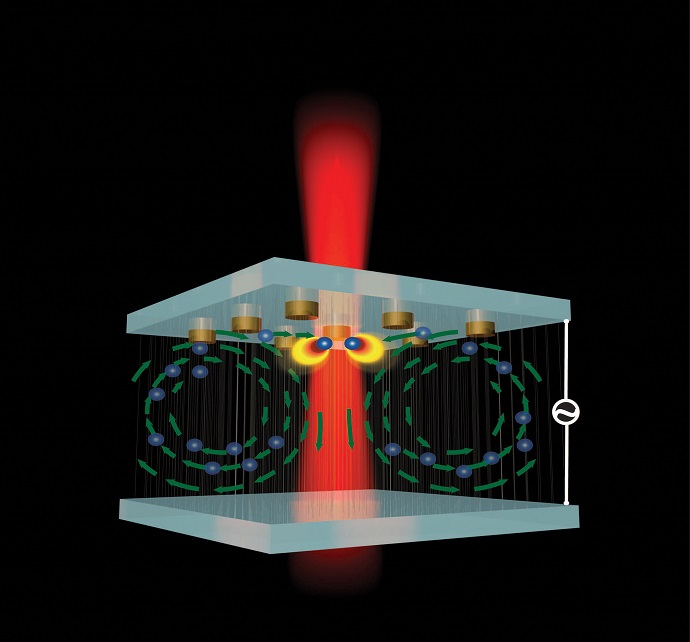 This rendering depicts a new type of "nanotweezer" that could aid efforts to create advanced technologies such as quantum computers and ultra-high-resolution displays. (Purdue University image/Mikhail Shalaginov and Pamela Burroff-Murr)

WEST LAFAYETTE, Ind. - A new type of "nanotweezer" capable of positioning tiny objects quickly and accurately and freezing them in place could enable improved nanoscale sensing methods and aid research to manufacture advanced technologies such as quantum computers and ultra-high-resolution displays.

The device, fabricated at Purdue University's Birck Nanotechnology Center, uses a cylindrical gold "nanoantenna" with a diameter of 320 nanometers, or about 1/300th the width of a human hair. The structures concentrate and absorb light, resulting in "plasmonic hotspots" and making it possible to manipulate nanometer-scale objects suspended in a fluid.

"The proposed approach enables the immediate implementation of a myriad of exciting applications," saidAlexandra Boltasseva, associate professor of electrical and computer engineering.

Findings are detailed in a paper appearing online in Nature Nanotechnology Monday (Nov. 2).

Plasmonic devices harness clouds of electrons called surface plasmons to manipulate and control light. Potential applications for the nanotweezer include improved-sensitivity nanoscale sensors and the study of synthetic and natural nanoobjects including viruses and proteins; creation of "nanoassemblies" for plasmonic materials that could enable a host of advanced technologies; ultra-resolution "optoﬂuidic" displays; and plasmonic circuitry for quantum logic units.

The nanotweezer might be used to create devices containing nanodiamond particles or other nanoscale light-emitting structures that can be used to enhance the production of single photons, workhorses of quantum information processing, which could bring superior computers, cryptography and communications technologies.

Conventional computers use electrons to process information. However, the performance might be ramped up considerably by employing the unique quantum properties of electrons and photons, said Vladimir M. Shalaev, co-director of a new Purdue Quantum Center, scientific director of nanophotonics at the Birck Nanotechnology Center and a distinguished professor of electrical and computer engineering.

"The nanotweezer system has been shown to cause convection in fluid on-demand, resulting in micrometer-per-second nanoparticle transport by harnessing a single plasmonic nanoantenna, which until now has been thought to be impossible," said doctoral student Justus C. Ndukaife.

Previous research had shown that convection using a single plasmonic nanoantenna was too weak to induce such a strong convection, below 10 nanometers per second, which cannot result in a net transport of suspended particles.

However, the Purdue researchers have overcome this limitation, increasing the velocity of particle transport by 100 times by applying an alternating current electric field in conjunction with heating the plasmonic nanoantenna using a laser to induce a force far stronger than otherwise possible. "This work brings the outstanding spatial resolution of plasmonic hotspots to the field of rapid electrokinetic patterning (REP),” said Steve Wereley, a professor of mechanical engineering.

Ndukaife said, "The local electromagnetic field intensity is highly enhanced, over 200 times, at the plasmonic hotspot. The interesting thing about this system is that not only can we trap particles but also do useful tasks because we have these hotspots. If I bring a particle to the hotspot then I can do measurements, and sensing is enhanced because it is in a hotspot."

The Purdue researchers are the first to induce electrothermoplasmonic flow using plasmonic structures.

The system also makes it possible to create patterns to project images, potentially for displays with ultra-fine resolution.

The laser traps the particles, making it possible to precisely position them. The technique was demonstrated with polystyrene particles.

The paper was authored by Ndukaife; Alexander V. Kildishev, an associate professor of electrical and computer engineering; Agbai George Agwu Nnanna, a professor of mechanical engineering; Shalaev; Wereley; and Boltasseva.

The ongoing research is based at the Birck Nanotechnology Center and is funded by the National Science Foundation.

Plasmon-enhanced optical trapping is being actively studied to provide efﬁcient manipulation of nanometer-sized objects. However, a long-standing issue with previously proposed solutions is how to controllably load the trap on-demand without relying on Brownian diffusion. Here, we show that the photo-induced heating of a nanoantenna in conjunction with an applied a.c. electric ﬁeld can initiate rapid microscale ﬂuid motion and particle transport with a velocity exceeding 10 μms –1, which is over two orders of magnitude faster than previously predicted. Our electrothermoplasmonic device enables on-demand long-range and rapid delivery of single nanoobjects to speciﬁc plasmonic nanoantennas, where they can be trapped and even locked in place. We also present a physical model that elucidates the role of both heat-induced ﬂuidic motion and plasmonic ﬁeld enhancement in the plasmon-assisted optical trapping process. Finally, by applying a d.c. ﬁeld or low-frequency a.c. ﬁeld (below 10 Hz) while the particle is held in the trap by the gradient force, the trapped nanoobjects can be immobilized into plasmonic hotspots, thereby providing the potential for effective low-power nanomanufacturing on-chip.