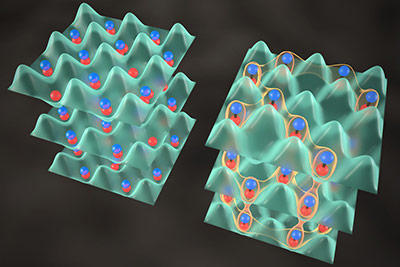 Physicists at JILA have made their "quantum crystal" of ultracold molecules more valuable than ever by packing about five times more moleculesinto it. The denser crystal will help scientists unlock the secrets of magnets and other, more exotic materials.

The crystal is actually a gas of particles trapped in 3-D formation bylaser beams. The trap, called an optical lattice, has wells—local regions oflow energy—like an egg carton made of light. The researchers maneuvered a single molecule into each well, successfully filling about 25 percent of the crystal.The structure has an advantage over a real crystal, as it is made of scientifically interesting molecules that normally would not crystallize.

Described in the Nov. 6, 2015, issue of Science,* the JILA crystal is useful for studying correlations among the molecules' "spins," or rotations, a quantum behavior related to magnetism. The denser crystal will enable scientists to study and model complex effects such as how spin correlations or entanglement—a quantum link between the properties of separated particles—spread through a large system. Scientists might use these effects, for example, to make novel materials for electronics or other applications.

JILA is operated jointly by the National Institute of Standards and Technology (NIST) and the University of Colorado Boulder.

"The density in the crystal is now high enough to introduce long-range order, so the molecules behave as an interconnected system instead of just a collection of isolated particles," JILA/NIST Fellow Jun Ye says. "The molecules are close enough to each other for their spins to migrate and relocate to other molecules, allowing us to investigate quantum connections of many particles that may lead to new materials."

Each molecule consists of one potassium atom bonded to one rubidium atom. The molecules are polar, with a positive electric charge on rubidium and a negative charge on potassium. This feature means the molecules can becontrolled with electric fields and can interact strongly, even when far apart.

"Because our molecules are polar, neighboring molecules in the lattice will interact with each other," JILA/NIST Fellow Deborah Jin says. "When each molecule has multiple neighbors to talk to, these interactions become much more important and affect the entire crystal."

Building the quantum crystal was something of a tour de force in atomic manipulation. While researchers can create a crystal from one atomic gasrelatively easily, combining two different atomic gases was difficult. But this was necessary to arrange for the two different atoms to form a molecule. The recipe required a small cloud of rubidium atoms, a class of particles that like to act in unison, and a large cloud of potassium atoms, which tend to be more independent.

The JILA team loaded the optical lattice by overlapping the two clouds to match their densities and energy levels in the intersection so that one of each type of atom tended to accumulate in each well. Researchers then used magnetic fields and lasers to fuse the atom pairs into molecules with the lowest possible vibrational and rotational energy. Remaining stray atoms were flushed out of the trap.

JILA scientists first created ultracold molecules in 2008 and several years ago formed the first molecular crystal, in which the molecules swapped spins.** To reduce chemical reactions and extend molecule lifetimes, researchers made the trap wells deeper. Now they've achieved their next goal of filling enough wells to unifythe crystal as a system, opening the door for intriguing new quantum phenomena.

The research was funded by NIST, the Air Force Office of Scientific Research, Army Research Office and National Science Foundation.

As a non-regulatory agency of the U.S. Department of Commerce, NIST promotes U.S. innovation and industrial competitiveness by advancing measurement science, standards and technology in ways that enhance economic security and improve our quality of life.