Is the vacuum really empty? 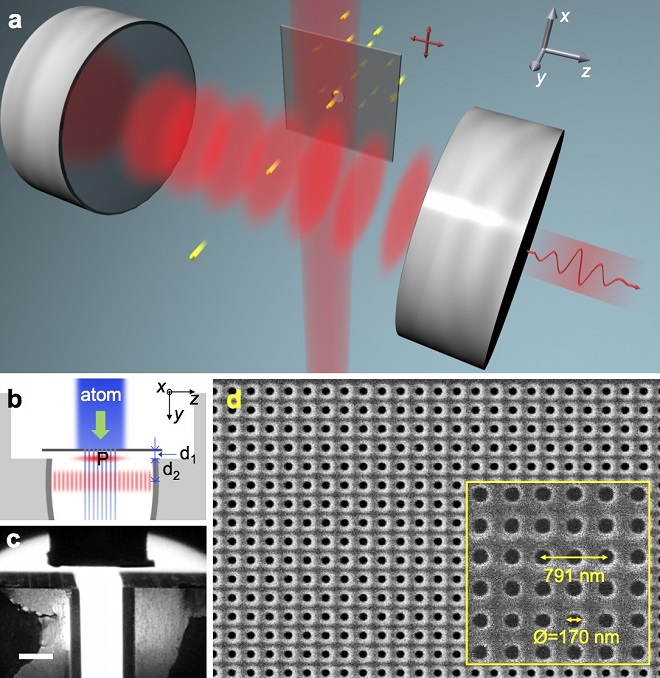 a. Experimental schematic. Vacuum energy distribution is imaged by using single barium atoms and a nanohole aperture. b. Top view of the experimental setup. P: pump laser with d1+d2=400 microns. c. A photo showing the actual setup. d. A nanohole array used in the experiment. Nanoholes with diameter of 170 nm were drilled on a silicon nitride membrane.

The vacuum energy can be very dense in a tiny volume like in a microcavity. The energy would be distributed there like a standing wave pattern of a string. But there has been no direct imaging of the vacuum energy density in a confined volume. In a recent paper published in Nature Communications, Moonjoo Lee et al. reported three-dimensional imaging of the vacuum field in a microcavity (published on March 7, 2014).

They realized what P. Dirac suggested in their experiment. They employed a single barium atom as a spontaneous-emission probe for the vacuum energy density inside a high Q microcavity. The positions of the atom is precisely controlled by a nanohole array, an atomic beam aperture with a 2D array of nanoscopic holes. These holes drilled periodically at a period of the atomic transition wavelength on a 75nm-thick silicon nitride membrane. The atoms are prepared in the excited state just before they entered the cavity. Inside the cavity, the atom emits a photon with a probability proportional to the vacuum-field intensity at its position. In this way, they could obtained 2D image of the vacuum energy distribution in the transverse directions. The profile of the vacuum energy in the direction of the atomic motion was obtained from the spectrum of the emitted photons. The time-varying vacuum field that the atom experiences during the transit is encoded in the spectrum as transit-time broadening. Combining these sets of information, they could construct the 3D image of the vacuum energy density in the cavity. They could also measure the amplitude of the vacuum field from the nonlinearity in the mean photon number growth. It occurs when the mean number of photons in the cavity becomes comparable to unity, similar to the onset of single-atom lasing. The vacuum-field amplitude was as large as 1 V/cm in their microcavity.

3D image of the vacuum energy distribution in the cavity.

Their technique of using nanohole array and single atoms for the probe for the vacuum field can be applicable to other types of nano- and micro-structures for advanced photonics applications. More fundamental applications of their approach lie in heterogeneous quantum information processing. One can use atoms in a quantum mechanical superposition state instead of full excitation. With the help of the nanohole array, one can encode quantum information on atoms in a superposition state and transfer it to the cavity field, and vice versa.