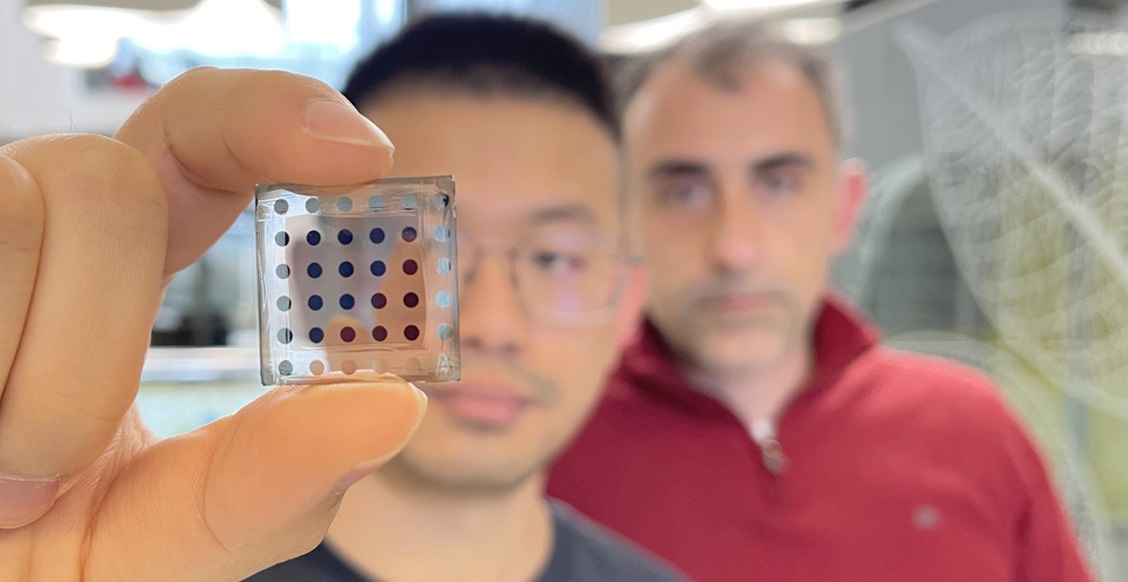 ICFO researcher Yongjie Wang holding the device in his hand with ICREA Prof. at ICFO Gerasimos Konstantatos in the back. ©ICFO

Displayed over roof tops and in solar farms, silicon-based solar cells are, so far, one of the most efficient systems in generating electricity from sunlight, but their fabrication can be expensive and energy demanding, aside from being heavy and bulky. The alternative solution of lower-cost thin film solar cells also brings the caveat of being mainly composed of toxic elements such as lead or cadmium, or containing scarce elements such as indium or tellurium. In the search for new technologies for thin photovoltaic systems, solar cells based on AgBiS2 nanocrystals have emerged as a star player in the game, consisting of non-toxic, earth-abundant elements, produced in ambient conditions at low temperatures and with low-cost solution-processing techniques. It can be integrated in ultrathin solar cells and has proven to be very stable, avoiding degradation of the cell over long periods of time.

Back in 2016, research carried out by ICREA Prof. at ICFO Gerasimos Konstantatos fabricated a semiconductor absorber 35nm thick solar cell based on AgBiS2 nanocrystals, which were synthesized at very low temperatures (100ºC) (an order of magnitude lower than the ones required for silicon based solar cells) and engineered at the nanoscale, through a layer-by-layer deposition process, to achieve an efficiency in the order of ~6%. Although a promising green alternative to silicon, these cells were still not capable of achieving compelling performance relevant for commercialization.

As such, many studies delved into ways to improve their performance and found that the optimal thickness of these semiconductor absorbers is closely linked to the absorption coefficients, thus the goal would be to find an ultrathin solar cell capable of having a high absorption efficiency, quantum efficiency and ultimate performance while reducing cost, weight and manufacturing. But, while aiming for an ultra-thin layered cell, the issue of dealing with light-trapping structures would add cost and complexity to the issue, because the thinner the structure, the more complex it becomes to absorb energy.

To overcome this challenge, ICFO researchers Yongjie Wang, Ignasi Burgues-Ceballos, in collaboration with Prof David Scanlon from University College London, Prof Aron Walsh from Imperial College London and Seán Kavanagh (UCL & Imperial), led by ICREA Prof. at ICFO Gerasimos Konstantatos, have made a considerable leap forward and achieved a groundbreaking result. Published in Nature Photonics, their study reports on a completely new approach towards the fabrication of these solar cells based on AgBiS2 that enables absorption coefficients higher than any other photovoltaic material used to date. 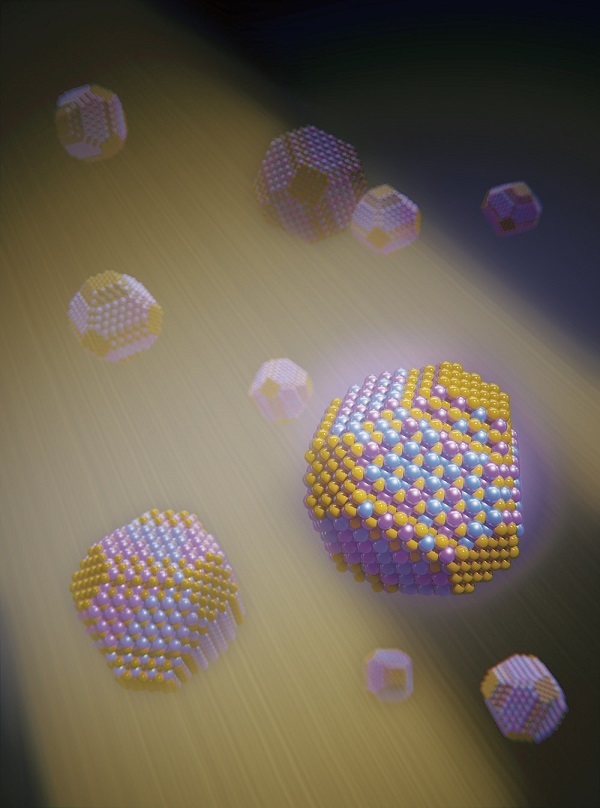 Artistic illustration of the homogenous cation distribution achieved inside the AgBiS2 nanocrystals.

In their study, the researchers cleverly engineered the layer of nanocrystals in the cell with an unconventional approach called cation disorder engineering. To do this, they took the AgBiS2 nanocrystals and by using a mild annealing process, they were able to tune the atomic positions of the cations within the lattice to actually force a cation inter-site exchange and achieve a homogenous cation distribution. By applying different annealing temperatures and achieving different cation distributions in the crystalline arrangement, they were able to show that this semiconducting material exhibits an absorption coefficient 5-10 times greater than any other material currently used in photovoltaic technology and, even more so, across a spectral range that cover from the UV (400nm) to the infrared (1000nm). To do this, a new surface chemistry was needed for this new material in order to preserve the optoelectronic quality of the nanocrystals upon annealing. Thus the authors made use of mercaptopropionic acid as a passivant ligand that preserved the material quality upon annealing.

To predict and verify the hypotheses of the work, the authors implemented Density Functional Theory calculations that supported the experimental evidence. Seán Kavanagh, a co-first author of the study from UCL and Imperial College, states: “The importance of atomic disorder in emerging inorganic solar cells is currently a hot topic of discussion in the field. Our theoretical investigations of the thermodynamics and optical / electronic effects of cation disorder in AgBiS2 revealed both the accessibility of cation re-distribution and the strong impact of this on the optoelectronic properties. Our calculations revealed that a homogeneous cation distribution would yield optimal solar cell performance in these disordered materials, corroborating the experimental discoveries as a testament of the synergism between theory and experiment.”

With this result, they constructed an ultrathin solution-processed solar cell by depositing the AgBiS2 nanocrystals, layer-by-layer, onto ITO/Glass, the most commonly used transparent conductive oxide substrates, among others. They coated the devices with a PTAA (Poly triaryl amine) solution and upon illuminating the device under artificial sunlight, they recorded a power conversion efficiency in excess of 9% for a device with a total thickness no more than 100 nm, 10-50 times thinner than current thin film PV technologies and 1000 times thinner that Silicon PV.

One of the champion devices was sent to an accredited Photovoltaic (PV) calibration laboratory in Newport, USA, which certified a conversion efficiency of 8.85% under AM 1.5G full sun illumination. As the ICFO researcher and first author of the study, Yongjie Wang, comments, “While we noticed a strong darkening of our thin films upon mild annealing due to increased absorption, it was challenging to fabricate such thin devices at the beginning. After grasping control of the process and optimization of the full stack including optimizing electron and hole transport layers, we finally found a highly reproducible structure for efficient solar cells with improved stability. It is really exciting to see that 30nm device gives such a high short-circuit current density up to 27mA/cm2 and an efficiency up to9%. ”

As ICREA Prof. at ICFO Gerasimos Konstantatos finally highlights, “the devices reported in this study set a record among low-temperature and solution processed, environmentally friendly inorganic solar cells in terms of stability, form factor and performance. The engineering of the multinary systems with cation disordered AgBiS2 colloidal nanocrystals has proven to offer an absorption coefficient higher than any other photovoltaic material used to date, enabling highly efficient extremely thin absorber photovoltaic devices. We are thrilled with the results and will continue to proceed in this line of study to exploit their intriguing properties in photovoltaics as well as other optoelectronic devices”.

This study has received partial funding by the Joan Ribas Araquistain Foundation (FJRA), as well as funding from European competitive funds, such as the European Research Council (ERC), among others.