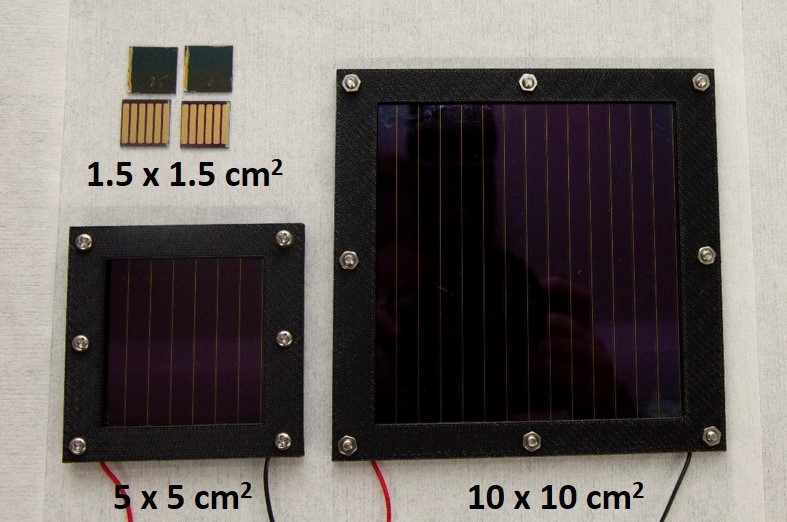 The researchers created solar modules that were 5x5 cm^2 and 10x10 cm^2 – much larger than the 1.5 x 1.5 cm^2 ones traditionally made in a lab, but smaller than commercial solar panels. Credit: OIST.

Researchers from the Okinawa Institute of Science and Technology Graduate University (OIST) have created perovskite solar modules with improved stability and efficiency by using a new fabrication technique that reduced defects. Their findings were published on the 25th January in Advanced Energy Materials.

Perovskites are one of the most promising materials for the next-generation of solar technology, soaring from efficiencies of 3.8% to 25.5% in slightly over a decade. Perovskite solar cells are cheap to produce and have the potential to be flexible, increasing their versatility. But two obstacles still block the way to commercialization: their lack of long-term stability and difficulties with upscaling.

“Perovskite material is fragile and prone to decomposition, which means the solar cells struggle to maintain high efficiency over a long time,” said first author Dr. Guoqing Tong, a postdoctoral scholar in the OIST Energy Materials and Surface Sciences Unit, led by Professor Yabing Qi. “And although small-sized perovskite solar cells have a high efficiency and perform almost as well as their silicon counterparts, once scaled up to larger solar modules, the efficiency drops.”

Perovskite solar cell devices require multiple layers to function. The active perovskite layer absorbs sunlight and generates charge carriers. The transport layers transport the charge carriers to the electrodes, releasing a current. The active perovskite layer is formed from many crystal grains. The boundaries between these grains, and other defects in the perovskite film, such as pinholes, lower the efficiency and lifespan of the solar devices.
Credit: OIST.

“Scaling up is challenging because as the modules increase in size, it’s harder to produce a uniform layer of perovskite, and these defects become more pronounced,” explained Dr. Tong. “We wanted to find a way of fabricating large modules that addressed these problems.”

Currently, most solar cells produced have a thin perovskite layer – only 500 nanometers in thickness. In theory, a thin perovskite layer improves efficiency, as the charge carriers have less distance to travel to reach the transport layers above and below. But when fabricating larger modules, the researchers found that a thin film often developed more defects and pinholes.

However, making thicker perovskite films came with its own set of challenges. Perovskites are a class of materials that are usually formed by reacting many compounds together as a solution and then allowing them to crystallize.

However, the scientists struggled to dissolve a high enough concentration of lead iodine – one of the precursor materials used to form perovskite – that was needed for the thicker films. They also found that the crystallization step was fast and uncontrollable, so the thick films contained many small grains, with more grain boundaries.

The researchers therefore added ammonium chloride to increase the solubility of lead iodine. This also allowed lead iodine to be more evenly dissolved in the organic solvent, resulting in a more uniform perovskite film with much larger grains and fewer defects. Ammonia was later removed from the perovskite solution, lowering the level of impurities within the perovskite film.

By adding ammonium chloride, the resultant perovskite film had fewer grains of a much larger size, reducing the number of grain boundaries.
Credit: OIST.

“This is the first time that a lifespan measurement has been reported for perovskite solar modules of this size, which is really exciting,” said Dr. Tong.

This work was supported by the OIST Technology Development and Innovation Center’s Proof-of-Concept Program. These results are a promising step forward in the quest to produce commercial-sized solar modules with efficiency and stability to match their silicon counterparts.

In the next stage of their research, the team plans to optimize their technique further by fabricating the perovskite solar modules using vapor-based methods, rather than by using solution, and are now trying to scale up to 15 x 15 cm2 modules.

Scientists from the OIST Energy Materials and Surface Sciences Unit show off the perovskite solar modules in action, powering a fan and toy car.
Credit: OIST.