Researchers from the Okinawa Institute of Science and Technology Graduate University (OIST) have created next-generation solar modules with high efficiency and good stability. Made using a type of material called perovskites, these solar modules can maintain a high performance for over 2000 hours. Their findings, reported 20th July 2020 in leading journal, Nature Energy, have brightened prospects of commercialization.

Perovskites have the potential to revolutionize the solar technology industry. Flexible and lightweight, they promise more versatility than the heavy and rigid silicon-based cells currently dominating the market. But scientists must overcome some major hurdles before perovskites can be commercialized.

“There are three conditions that perovskites must meet: they must be cheap to produce, highly efficient and have a long lifespan,” said Professor Yabing Qi, head of the OISTEnergy Materials and Surface Sciences Unit, who led this study.

A demonstration of a Perovskite Solar Cell

The cost of making perovskite solar cells is low, as the cheap raw materials require little energy to process. And in just over a decade, scientists have made huge strides in improving how effectively perovskite solar cells convert sunlight to electricity, with efficiency levels now comparable to those of silicon-based cells.

However, once scaled up from tiny solar cells to larger solar modules, the efficiency levels of perovskites plummet. This is problematic as commercial solar technology needs to remain efficient at the size of solar panels, several feet in length.

“Scaling-up is very demanding; any defects in the material become more pronounced so you need high-quality materials and better fabrication techniques,” explained Dr. Luis Ono, a co-author of this study.

The instability of perovskites is another key issue under intense investigation. Commercial solar cells need to be able to withstand years of operation but currently perovskite solar cells degrade fast.

Building up the layers

Professor Qi’s team, supported by the OIST Technology Development and Innovation Center’s Proof-of-Concept Program, addressed these stability and efficiency issues using a new approach. Perovskite solar devices are made up of multiple layers – each with a specific function. Instead of focusing on just one layer, they looked at the overall performance of the device and how the layers interact with one another.

The active perovskite layer, which absorbs sunlight, lies in the center of the device, sandwiched between the other layers. When photons of light strike the perovskite layer, negatively-charged electrons harness this energy and “jump” to a higher energy level, leaving behind positively-charged “holes” where the electrons used to be. These charges are then diverted in opposite directions into electron and hole transport layers above and below the active layer. This creates a flow of charge – or electricity – that can leave the solar device via electrodes. The device is also encapsulated by a protective layer that reduces degradation and prevents toxic chemicals from leaking into the environment. 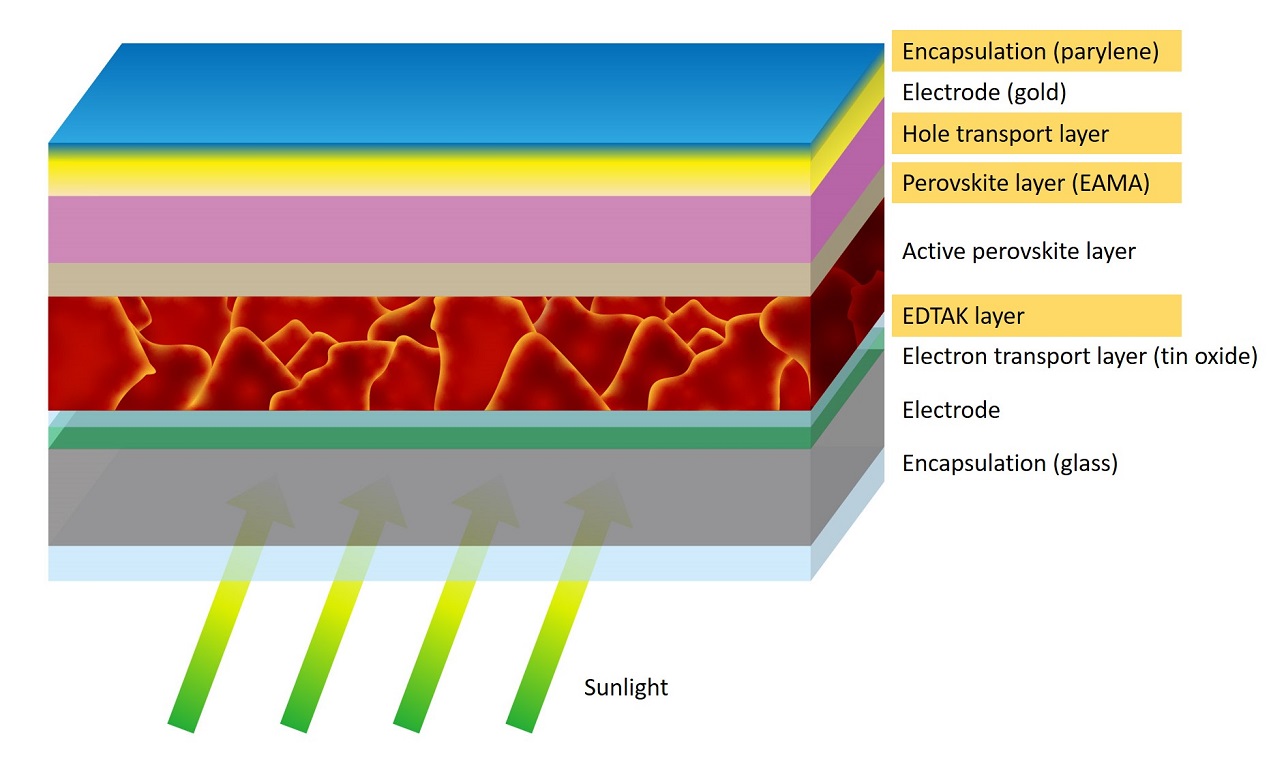 Perovskite solar cells and modules consist of many layers, each of which has a specific function. The scientists added or modified the layers highlighted in orange.
Credit: OIST.

In the study, the scientists worked with solar modules that were 22.4 cm2.

The scientists first improved the interface between the perovskite active layer and the electron transport layer, by adding a chemical called EDTAK between the two layers. They found that EDTAK prevented the tin oxide electron transport layer from reacting with the perovskite active layer, increasing the stability of the solar module.

The EAMA-treated device also showed better stability under humidity and temperature tests. This was due to how the EAMA interacted with the surface of the perovskite active layer, which is a mosaic of crystal grains. In solar devices without EAMA, the scientists saw that cracks formed on the surface of the active layer, which originated from the boundaries between these grains. When the scientists added EAMA, they observed that the additional perovskite material filled the grain boundaries and stopped moisture from entering, preventing these cracks from forming.

The team also modified the hole transport layer itself, by mixing in a small amount of polymer called PH3T. This polymer boosted moisture resistance by providing the layer with water-repellant properties.

The polymer also solved a major issue that has previously hampered improvements to long-term stability. The electrode on top of the perovskite solar module is formed from thin strips of gold. But over time, tiny gold particles migrate from the electrode, through the hole transport layer and into the active perovskite layer. This irreversibly impairs performance of the device.

When the researchers incorporated PH3T, they found that the gold particles migrated into the device more slowly which significantly increased the module’s lifespan.

For their final improvement, the scientists added a thin layer of the polymer, parylene, in addition to glass, to provide a protective coating to the solar module. With this added protection, the solar modules maintained about 86% of their initial performance, even after 2000 hours of constant illumination.

In collaboration with Dr. Said Kazaoui at National Institute of Advanced Industrial Science and Technology (AIST), the OIST team tested the improved solar modules and obtained an efficiency of 16.6% – a very high efficiency for a solar module of that size. The researchers now aim to carry out these modifications on larger solar modules, leading the way towards the development of large-scale, commercial solar technology in the future.