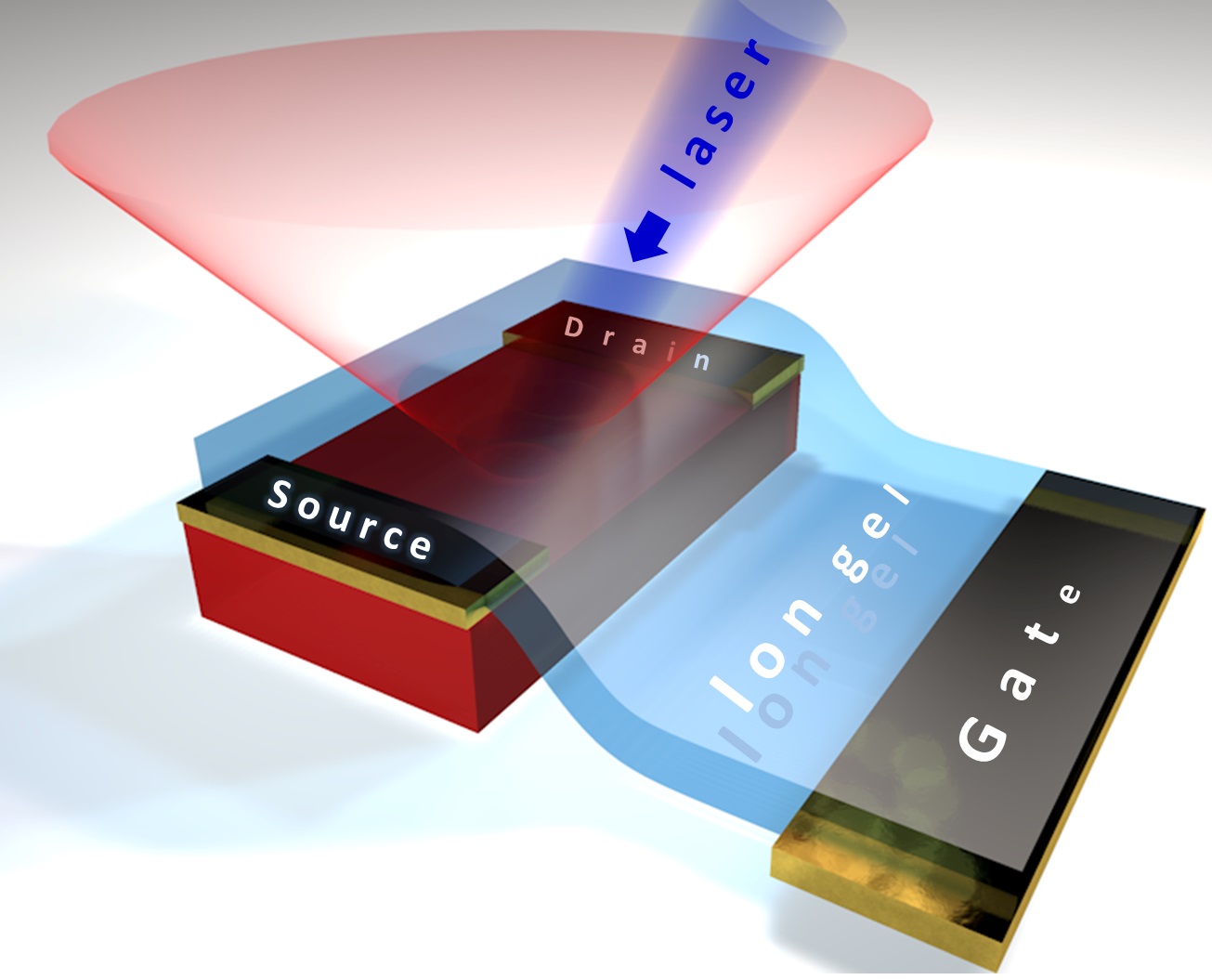 A conceptual view of a transistor device that controls photoluminescence (the light red cone) emitted by a hybrid perovskite crystal (the red box) that is excited by a blue laser beam after voltage is applied to an electrode (the gate). Image: Vitaly Podzorov and Yaroslav Rodionov

Scientists have found a new way to control light emitted by exotic crystal semiconductors, which could lead to more efficient solar cells and other advances in electronics, according to a Rutgers-led study in the journal Materials Today.

Their discovery involves crystals called hybrid perovskites, which consist of interlocking organic and inorganic materials, and they have shown great promise for use in solar cells. The finding could also lead to novel electronic displays, sensors and other devices activated by light and bring increased efficiency at a lower cost to manufacturing of optoelectronics, which harness light.

The Rutgers-led team found a new way to control light (known as photoluminescence) emitted when perovskites are excited by a laser. The intensity of light emitted by a hybrid perovskite crystal can be increased by up to 100 times simply by adjusting voltage applied to an electrode on the crystal surface.

“To the best of our knowledge, this is the first time that the photoluminescence of a material has been reversibly controlled to such a wide degree with voltage,” said senior author Vitaly Podzorov, a professor in the Department of Physics and Astronomy in the School of Arts and Sciences at Rutgers University–New Brunswick. “Previously, to change the intensity of photoluminescence, you had to change the temperature or apply enormous pressure to a crystal, which was cumbersome and costly. We can do it simply within a small electronic device at room temperature.”

Semiconductors like these perovskites have properties that lie between those of the metals that conduct electricity and non-conducting insulators. Their conductivity can be tuned in a very wide range, making them indispensable for all modern electronics.

“All the wonderful modern electronic gadgets and technologies we enjoy today, be it a smartphone, a memory stick, powerful telecommunications and the internet, high-resolution cameras or supercomputers, have become possible largely due to the decades of painstaking research in semiconductor physics,” Podzorov said.

Understanding photoluminescence is important for designing devices that control, generate or detect light, including solar cells, LED lights and light sensors. The scientists discovered that defects in crystals reduce the emission of light and applying voltage restores the intensity of photoluminescence.

Hybrid perovskites are more efficient and much easier and cheaper to make than standard commercial silicon-based solar cells, and the study could help lead to their widespread use, Podzorov said. An important next step would be to investigate different types of perovskite materials, which may lead to better and more efficient materials in which photoluminescence can be controlled in a wider range of intensities or with smaller voltage, he said.

The study included lead author Hee Taek Yi in Rutgers’ Department of Physics and Astronomy and co-authors Assistant Research Professor Sylvie Rangan and Professor Robert A. Bartynski, department chair. Researchers at the University of Minnesota and University of Texas at Dallas contributed to the study.