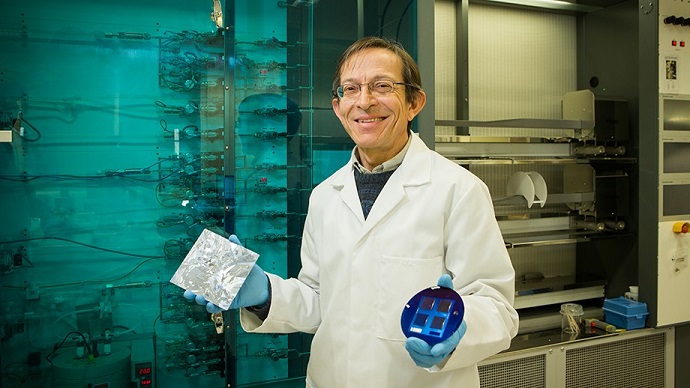 The collaboration, between scientists at The Australian National University (ANU), UC Berkeley, who led the research, and EPFL groups, did away with the chemical doping that conventional silicon cells rely on and instead used pure silicon sandwiched between thin films of different materials.

"For a lot of people this will broaden their idea of how silicon solar cells can be made," said lead author James Bullock, a PhD student at the ANU Research School of Engineering, who conducted the study whilst on placement at UC Berkeley's Department of Electrical Engineering and Computer Sciences.

"These cells can be made using a very simple low-temperature fabrication procedure, so they have the potential for cheaper processing whilst still having high efficiencies."

The research is published in Nature Energy.

The team's best solar cell so far has achieved nearly 20 per cent efficiency, which is better than the industry average, said co-author Professor Andres Cuevas, also from ANU Research School of Engineering.

"There is nothing to say we can't get to the world record efficiencies, over 25 per cent, using this approach," he said.

Instead of using doping impurities within the silicon structure to control the electronic properties, the team sandwiched a silicon wafer between a lithium fluoride layer and a molybdenum oxide layer.

Lithium fluoride has a low binding energy of electrons, known as the work function, while molybdenum oxide's is very high. The difference means that when sunlight hits the silicon and creates an electron-hole pair, the electron is drawn to the lithium fluoride, while the hole goes the opposite way, which creates an electric current.

The new design promises a lower energy footprint for solar cells, because they are manufactured below 200 degrees Celsius, in contrast to conventional doped cells which are made at above 800 degrees Celsius.

The cells also do not require the often toxic chemicals used to dope conventional materials.

"This device is the result of a completely new understanding of the physics of solar cells," said Professor Cuevas.

"All those wonderful materials were sitting there, some of them already in our lab cabinets, but we had not realised how useful they can be."