Energy generation from heat with a solar cell built backwards 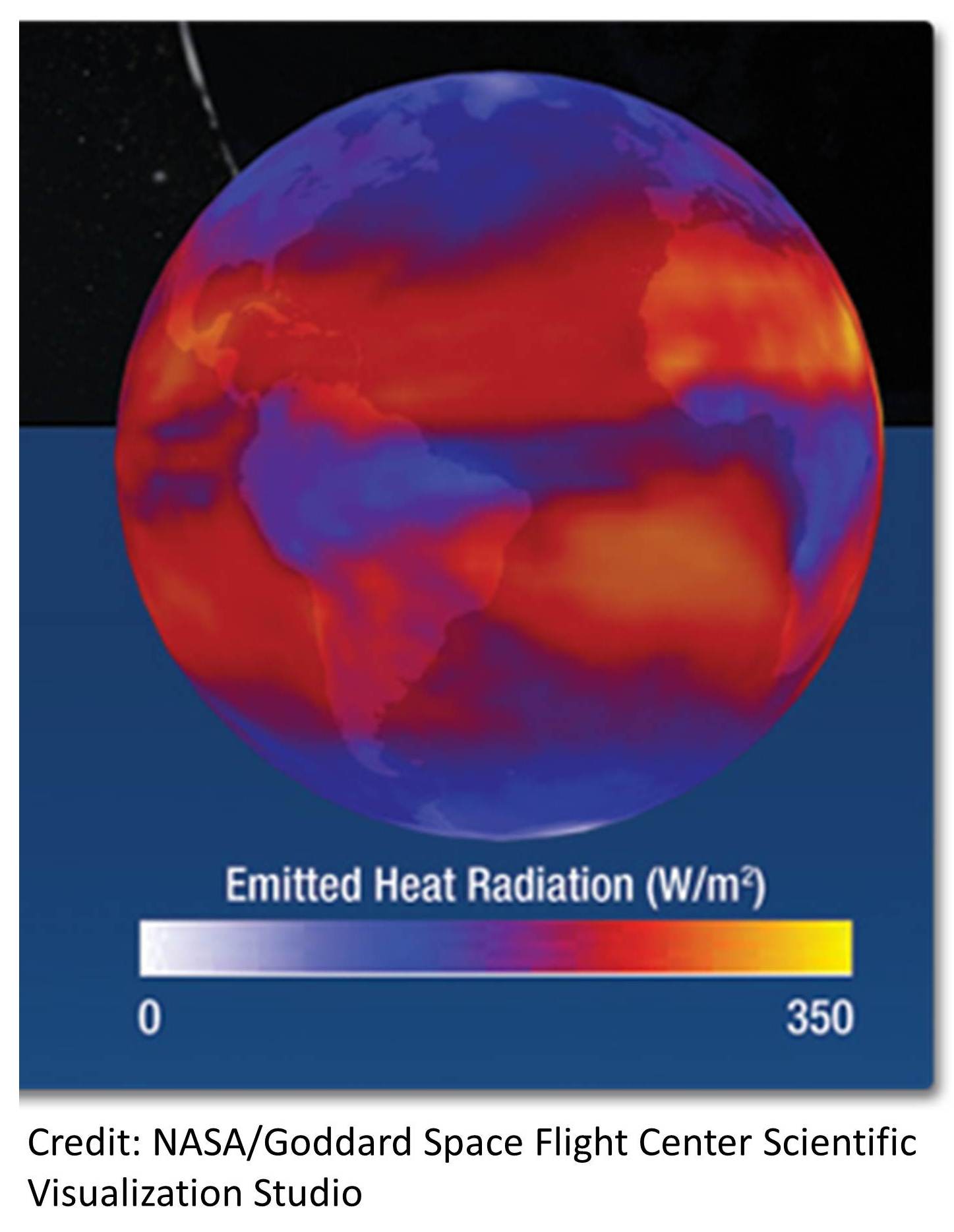 An image from NASA that illustrates the amount of terrestrial heat dissipated by Earth into the outer space.

Nowadays, almost everybody is familiar with the concept of a solar cell as a renewable energy generator. Simply put, solar cells absorb incoming sunlight and convert a part of photon energy into electricity. The remainder of photon energy is dissipated as heat.

In more technical terms, energy generation in solar photovoltaic (PV) cells is driven by the potential difference established by photo-excitation and separation of charge carriers (i.e., electrons and holes) across a p-n junction. This potential difference – a photo voltage – drives electric current through any attached load as the system is trying to return to an equilibrium state (figure, left panel). Accordingly, solar cells are typically engineered to increase absorption of solar photons as this translates into a larger photocurrent and thus larger generated power.

Although the idea is rather counter-intuitive, "reverse solar cell" systems can also generate electric power by emitting rather than absorbing photons. Such systems – known as thermoradiative (TR) cells – generate voltage and electric power via non-equilibrium thermal radiation of infrared photons. If a PV cell is heated by an external terrestrial heat source, the system is driven out of the equilibrium with the environment, and its emission rate increases. This process also creates a potential difference, albeit of an opposite polarity from that of a photo-excited solar cell (figure, right panel), which can drive electric current through the load. Thermoradiative cells thus offer an opportunity to generate clean energy by harvesting radiation from largely untapped terrestrial thermal emission sources, potentially including the Earth itself.

In new work, researchers from the Mechanical Engineering Department at Massachusetts Institute of Technology (MIT) have proposed an innovative way to improve the efficiency and to simultaneously increase power generation rate of thermoradiative cells. Reporting their results in the article just published in Scientific Reports (“Entropic and near-field Improvements of thermoradiative cells"), the MIT team led by Dr. Svetlana V. Boriskina and Prof. Gang Chen predict that thermoradiative engines with narrowband emission spectra can provide much higher efficiency of the energy conversion process than solar PV cells. 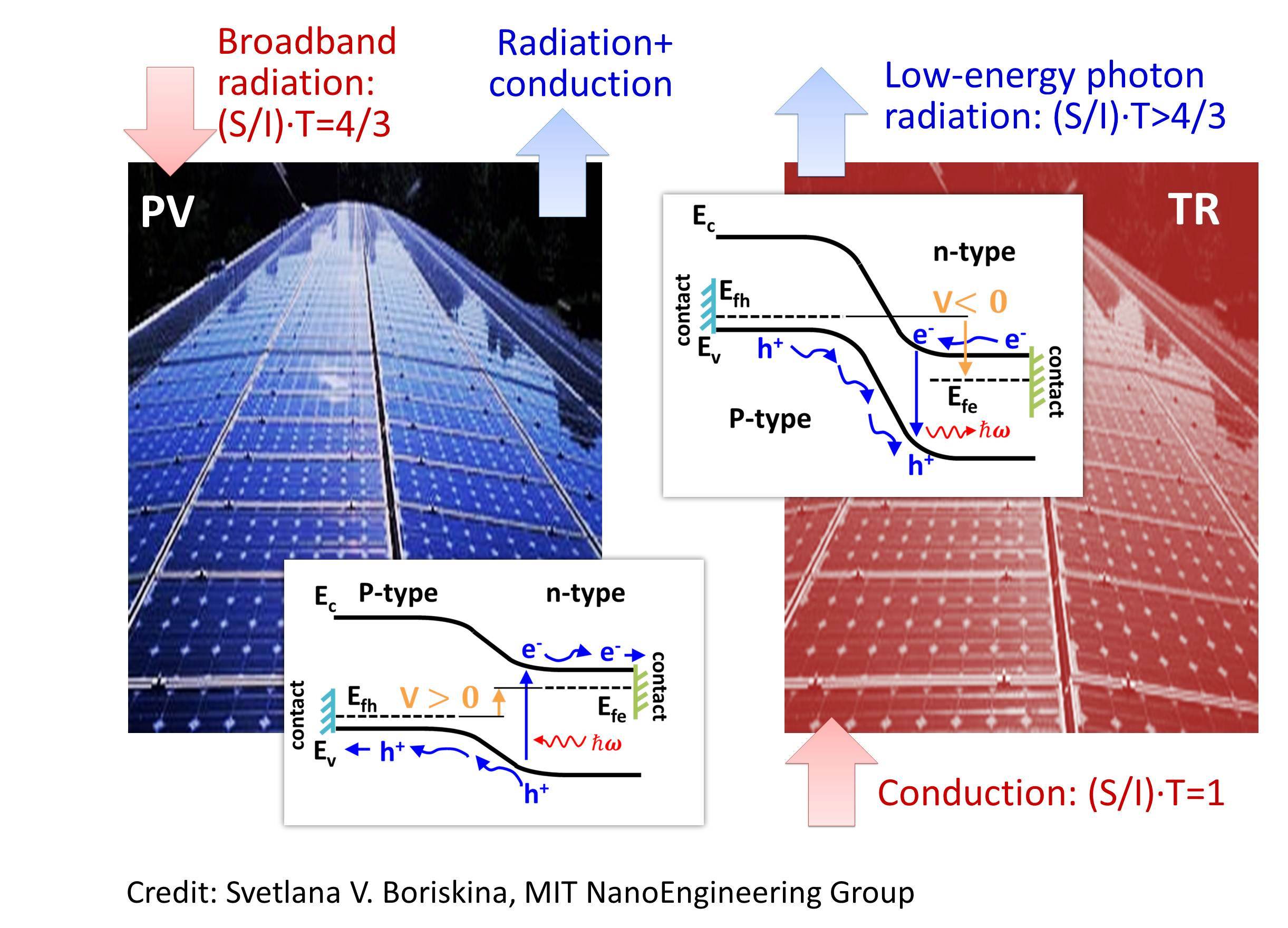 PV cell vs thermoradiative cell
Figure. Comparison of a conventional solar-powered photovoltaic cell (left) and a heat-harvesting thermoradiative cell (right). The insets show the corresponding band diagrams, the generated voltage polarity, and the direction of the electrical current.

This technological breakthrough was achieved by analyzing and comparing entropy content of solar and thermal radiation as well as heat conduction. Entropy is a measure of ‘useless’ thermal energy that cannot be converted into either mechanical work or electricity. When the engine at temperature T receives energy (I) from an external source it also receives entropy (S). Likewise, as the entropy cannot be converted into useful work, it has to be removed from the engine, which also results in loss of energy, limiting the engine efficiency. The MIT researchers concluded that an ideal engine then should receive energy in the form that carries the lowest entropy content, and dump entropy in the form that carries the highest entropy content.

Ideal thermoradiative cell emerged as an excellent candidate for high-efficiency engine as it receives energy through heat conduction and dumps entropy through radiation, which carries higher entropy content than conduction (see figure). In contrast, the efficiency of the engines that receive energy in the form of broadband radiation (such as e.g. solar PV cells) is limited by the high entropy content of solar energy.

By analyzing different spectral components of broadband thermal radiation the MIT team showed that low-energy photons carry much higher entropy per unit energy than either high-frequency photons or heat conduction. This led them to the conclusion that the efficiency of the TR cell can be significantly improved if the cell emitted radiative energy only through a narrow frequency band just above its electronic bandgap. The MIT researchers predicted that under this condition, an ideal TR cell efficiency can reach the Carnot efficiency limit, which significantly exceeds the limiting efficiency of an ideal solar PV cell made of the same material.

Ideally, an engine should provide high efficiency and high power density. However, operation at the efficiency limit of any engine is typically achieved when the power is extracted infinitely slowly. In the case of a conventional solar cell operation, this means operating the PV cell at or near the open circuit voltage, which would result in the negligible power generation. Likewise, maximum power generation of the thermoradiative cell does not occur at the cell highest efficiency point, forcing to compromise between efficiency and power density.

To address this challenge, the MIT team demonstrated that not only the conversion efficiency but also the power generation density of the TR cell can be increased via the near-field photon extraction. In the near-field extraction scheme, the TR cell is integrated with a heat sink, which is separated from the cell by a nanoscale gap. If the heat sink material supports electromagnetic surface modes, the radiative photon flux from the TR cell to the heat sink can be dramatically enhanced, which translates into high power generation density.

This work provides insights into the development of high-efficiency energy converters and paves the way to efficiently utilize terrestrial thermal emission for clean renewable energy production.