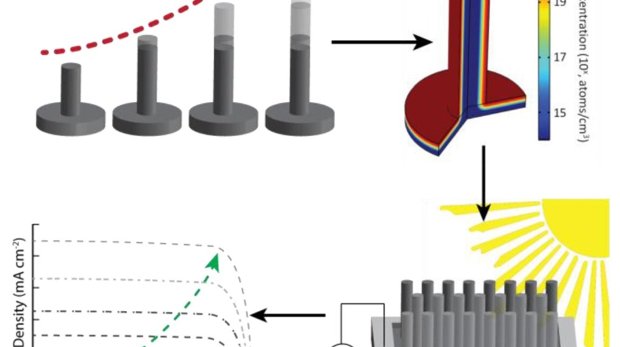 Solar cells are generally flat. However, by adding minuscule silicon pillars to the surface, it is possible to more than double the amount of energy produced for each surface. This has been demonstrated by research by academics at the University of Twente research institute MESA+. In an article published last week in the scientific journal Advanced Energy Materials, they show what the optimum height and doping depth of the pillars is.

Last year, the University of Twente researchers succeeded in creating a semi-conductor fitted with one million minuscule pillars per square centimetre. These pillars are able to convert sunlight into electricity. The semi-conductor consists of two types of silicon: one is ‘contaminated’ with the element boron and the other with phosphorus. The transition between both types of silicon, known as the PN junction, is essential for the efficiency of the solar cell, as it is at this location in the structure that the positive and negative charges are separated. The challenge in creating the pillars was to make sure that the PN junction followed the structure of the surface as accurately as possible.

In a new study, the same researchers looked at what pillar height and what PN junction depth the semi-conductor works most efficiently. The answer was 40 micrometres high and 790 nanometres deep, producing an efficiency rate of 13 per cent. This represents more than double the efficiency compared to a flat structure, where no more than six per cent of the sunlight can be converted into electricity.

The research is part of a large-scale project in which various research groups at the University of Twente are working together on a ‘solar-to-fuel’ device that enables the conversion of sunlight directly into a fuel such as hydrogen gas. The pillars have two functions here – not only do they increase the amount of sunlight that can be captured, they also enlarge the reaction surface area on which hydrogen can be produced. In addition, the pillars can be used to make solar cells more efficient. However, University of Twente Professor Jurriaan Huskens does not expect this to be particularly worthwhile for regular solar panels because of the higher costs of production. Nonetheless, the technology could prove useful for specific technologies.

The research has been carried out by scientists from the MESA+ Molecular Nanofabrication and Mesoscale Chemical Systems research groups. The leading researcher is Rick Elbersen, who gained his PhD at the University of Twente on 4 December for his thesis on the use of silicon as a basic material for structuring solar cells and the optimization and modification of these materials. The research was made possible in part thanks to the financial assistance received from the Foundation for Fundamental Research on Matter.