Bright outlook for solar panels thanks to bespoke nanomaterials

Research by the University of Bath has demonstrated a new and more efficient way of developing zinc oxide nanomaterials, a key component in the conversion of light energy to electricity in solar panels. 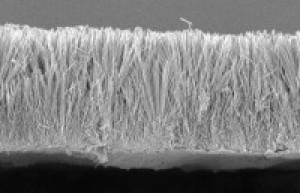 A cross-section of nanowire film

Solar energy is one of the most widely used renewable sources of energy. Its capacity almost doubled in 2014 growing from 2.8GW to nearly 5GW, with 650,000 installations ranging from solar farms to panels on homes.

There are a number of different types of solar panels with this research particularly benefiting dye-sensitised solar panels which work in a similar way to the leaves of a plant in that they contain a chlorophyll-like dye which absorbs light energy from the sun. When the light energy is absorbed into the cell, it creates an ‘excited electron’ which then injects into the nanomaterial and transports the charge, generating an electrical current.

Zinc Oxide is an ideal nanomaterial for transporting the ‘excited electron’ from the dye as it is transparent and doesn’t compete with the dye in absorbing the light. Using Electrochemical Anodization, the researchers were able to create zinc oxide nanowires containing poly crystalline structures which have much higher surface areas. As a result of the greater surface area, the dye-coated nanowires are more efficient at absorbing light and subsequently better at transporting the electrons.

Nanomaterials are extremely small materials that have dimensions on the nanometre scale and play a significant role in developing more efficient renewable technologies, removing pollutants from the air and water, and the treatment of diseases.

Compared to materials on the usual (macro) scale, nanomaterials benefit from having very large surface areas compared to their volume, meaning they are an ideal place for chemical reactions or other surface-based processes to take place.

Solar as part of the build process

Dye-sensitised solar cells have a number of advantages over traditional solar technologies including their lighter weight, greater flexibility and cheaper manufacture costs. They can also be produced semi-transparently and in a number of different colours meaning they can be incorporated into stained glass windows. This allows architects to consider a building’s potential solar technology capacity at the early design stages as part of the build process rather than installing what can be seen as unattractive panelling to finished buildings.

Commenting on his findings, David Miles said: “This technique allows us to gain a significant degree of control over the nanomaterials we produce, allowing us to tailor the properties of the materials towards our desired application in solar cells. We are now working on applying these materials in efficient dye-sensitized solar cells.”

Supervisor and Associate Professor in Chemical Engineering, Dr Davide Mattia, added: “Electrochemical anodization is a powerful yet simple fabrication technology to produce complex structured materials at the nanometre scale. The fabrication technology can be scaled at a level compatible with industrial and commercial use and can be applied to a variety of starting metals, all producing different types of nanostructures.

“David has done a fantastic job in identifying the fabrication parameters that yield nanostructures most suited for solar cell applications.”

The full paper ‘Hierarchical 3D ZnO nanowire structures via fast anodization of zinc’ is published in the Journal of Materials Chemistry A and can be read at http://pubs.rsc.org/en/content/articlelanding/2015/ta/c5ta03578c#!divAbstract

The importance of the work is highlighted by the award of the Journal’s front cover:http://pubs.rsc.org/en/content/articlelanding/2015/ta/c5ta90180d#!divAbstract

Research carried out by the University of Bath’s Department of Chemical Engineering was recently ranked sixth nationally for impact by the 2014 Research Excellence Framework, an independent assessment of UK university research activity.