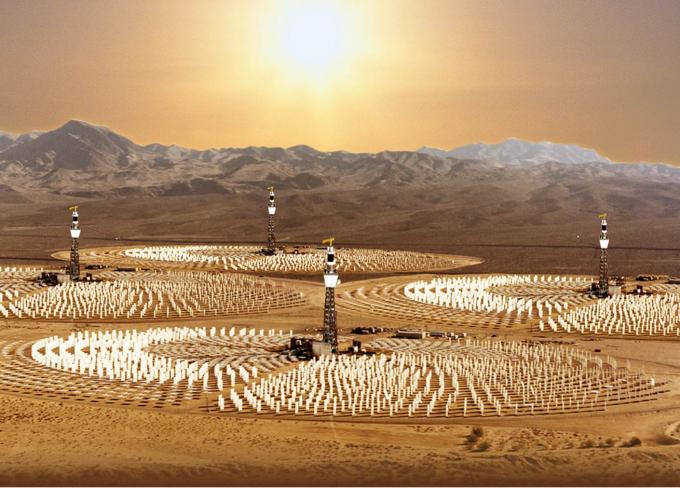 A University of Colorado Boulder team has developed a radically new technique that uses the power of sunlight to efficiently split water into its components of hydrogen and oxygen, paving the way for the broad use of hydrogen as a clean, green fuel.

The CU-Boulder team has devised a solar-thermal system in which sunlight could be concentrated by a vast array of mirrors onto a single point atop a central tower up to several hundred feet tall. The tower would gather heat generated by the mirror system to roughly 2,500 degrees Fahrenheit (1,350 Celsius), then deliver it into a reactor containing chemical compounds known as metal oxides, said CU-Boulder Professor Alan Weimer, research group leader.

As a metal oxide compound heats up, it releases oxygen atoms, changing its material composition and causing the newly formed compound to seek out new oxygen atoms, said Weimer.  The team showed that the addition of steam to the system -- which could be produced by boiling water in the reactor with the concentrated sunlight beamed to the tower -- would cause oxygen from the water molecules to adhere to the surface of the metal oxide, freeing up hydrogen molecules for collection as hydrogen gas.

“We have designed something here that is very different from other methods and frankly something that nobody thought was possible before,” said Weimer of the chemical and biological engineering department. “Splitting water with sunlight is the Holy Grail of a sustainable hydrogen economy.” 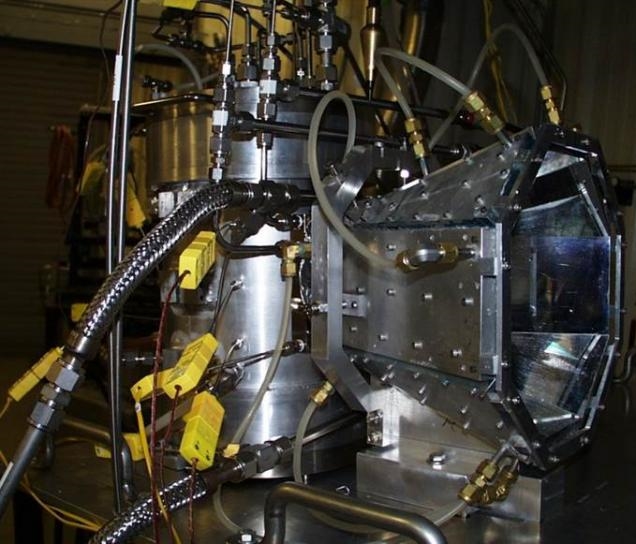 One of the key differences between the CU method and other methods developed to split water is the ability to conduct two chemical reactions at the same temperature, said Musgrave, also of the chemical and biological engineering department. While there are no working models, conventional theory holds that producing hydrogen through the metal oxide process requires heating the reactor to a high temperature to remove oxygen, then cooling it to a low temperature before injecting steam to re-oxidize the compound in order to release hydrogen gas for collection.

“The more conventional approaches require the control of both the switching of the temperature in the reactor from a hot to a cool state and the introduction of steam into the system,” said Musgrave. “One of the big innovations in our system is that there is no swing in the temperature. The whole process is driven by either turning a steam valve on or off.”

“Just like you would use a magnifying glass to start a fire, we can concentrate sunlight until it is really hot and use it to drive these chemical reactions,” said Muhich. “While we can easily heat it up to more than 1,350 degrees Celsius, we want to heat it to the lowest temperature possible for these chemical reactions to still occur. Hotter temperatures can cause rapid thermal expansion and contraction, potentially causing damage to both the chemical materials and to the reactors themselves.”

In addition, the two-step conventional idea for water splitting also wastes both time and heat, said Weimer, also a faculty member at CU-Boulder’s BioFrontiers Institute. “There are only so many hours of sunlight in a day,” he said.

The research was supported by the National Science Foundation and by the U.S. Department of Energy.

With the new CU-Boulder method, the amount of hydrogen produced for fuel cells or for storage is entirely dependent on the amount of metal oxide -- which is made up of a combination of iron, cobalt, aluminum and oxygen -- and how much steam is introduced into the system. One of the designs proposed by the team is to build reactor tubes roughly a foot in diameter and several feet long, fill them with the metal oxide material and stack them on top of each other. A working system to produce a significant amount of hydrogen gas would require a number of the tall towers to gather concentrated sunlight from several acres of mirrors surrounding each tower.

Weimer said the new design began percolating within the team about two years ago. “When we saw that we could use this simpler, more effective method, it required a change in our thinking,” said Weimer.  “We had to develop a theory to explain it and make it believable and understandable to other scientists and engineers.”

Despite the discovery, the commercialization of such a solar-thermal reactor is likely years away. “With the price of natural gas so low, there is no incentive to burn clean energy,” said Weimer, also the executive director of the Colorado Center for Biorefining and Biofuels, or C2B2. “There would have to be a substantial monetary penalty for putting carbon into the atmosphere, or the price of fossil fuels would have to go way up.”

C2B2 is an arm of the Colorado Energy Research Collaboratory involving CU-Boulder, the Colorado School of Mines, Colorado State University and the National Renewable Energy Laboratory in Golden. The collaboratory works with industry partners, public agencies and other institutions to commercialize renewable energy technologies, support economic growth in the state and nation and educate the future workforce.