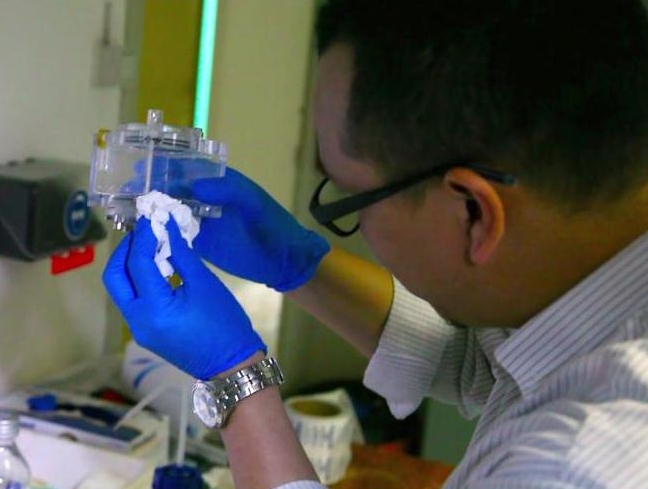 U Delft and the Helmholtz-Zentrum Berlin have taken a step forward in the production of hydrogen from solar energy. The researchers responsible publish their findings on Monday 29 July in the online edition of Nature Communications.

Hydrogen is widely regarded as the energy carrier of the future in, for example, cars powered by fuel cells. But for that its production has to be made affordable, efficient and environmentally friendly. One way of achieving this is through the electrolysis of water, breaking it down into hydrogen and oxygen, particularly if that is done using electricity generated sustainably. Electrolysis is an expensive technique, though.

Another possibility is the use of sunlight to split water into its component elements. As Professor Bernard Dam of the Faculty of Applied Sciences at TU Delft explains, that can be done using semiconducting electrodes: “All kinds of configurations are currently being tried out to produce hydrogen directly with sunlight. Using relatively expensive solar cells, for instance, an efficiency of 4.7 per cent has been achieved. But we believe that that technique will be difficult to improve, and also that it will be a costly procedure.”

“Our focus, therefore, has been a ‘cheap and stable’ solution. One interesting alternative involves combining a simple, inexpensive solar cell with a photo anode: a light-sensitive material made from a metal oxide. Bismuth vanadate (BiVO4), for example, which is stable in water. That was tried in earlier experiments, but the level of efficiency achieved was relatively low. The essential improvement now made by PhD student Fatwa Abdi is the addition of a so-called concentration gradient of tungsten atoms to the bismuth vanadate. They dramatically improve the efficiency of the photo anode.”

Record yield
“In this way we have reached a yield of almost 5 per cent. In other words, nearly 5 per cent of the energy in the incident sunlight is stored in the hydrogen produced. For this type of set-up, that is a record. And we believe that an efficiency of 10 per cent can eventually be achieved.”

The latest breakthrough has been made jointly by the Helmholtz-Zentrum Berlin for Materials and Energy (Prof. Roel van de Krol) and the Photovoltaic Materials and Devices Laboratory (PVMD) at TU Delft (Prof. Miro Zeman, Dr Arno Smets, Lihao Han, PhD student). “This shows Delft’s strength,” says Dam. “We are combining a solar cell produced in-house, at PVMD, with a photo anode also made at the university, in the Faculty of Applied Sciences.”

The researchers publish their findings on Monday 29 July in the online edition of Nature Communications.