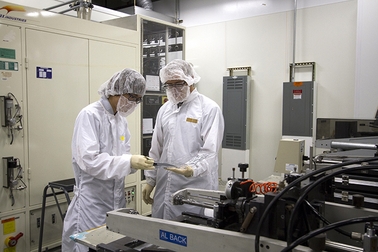 Much of the work on the SunShot Initiative project to improve the performance of solar cells will be done in ASU’s Solar Power Lab. Photo by: Jessica Hochreiter/ASU

A national project promising a significant advance in the technology for converting sunlight into electricity will be led by a team of Arizona State University engineers.

With support of a $3.5 million, three-year grant from the U.S. Department of Energy’s SunShot Initiative, the team will develop new ultra-thin silicon solar cells designed to increase the amount of electricity that can be produced through direct conversion of sunlight.

It’s one of an array of projects funded recently by $60 million in SunShot Initiative grants intended to help make solar energy economically competitive with other energy sources, advance the integration of solar energy into the nation’s energy grids and support a growing U.S. solar workforce.

The ASU team and its partners will achieve higher efficiency by developing a new silicon solar cell architecture. The cells will incorporate new design approaches that partner crystalline silicon with carrier-selective contacts. This will enable the novel cell design to circumvent the limitations of current silicon solar cells and allow low-cost silicon to achieve its full potential.

The project plans include making the advanced solar cell technology available to energy-related industries in the United States.

"Our work will be a part of helping the U.S. maintain its lead in advanced clean-energy technologies," says Stuart Bowden, the ASU team leader. "A wave of advances is expected in photovoltaic solar cell technologies that should propel solar-energy industry growth within the next several years, and our efforts stand to make a big contribution to move that forward."

Bowden, an associate research professor, will work with professor Stephen Goodnick, professor Christiana Honsberg and assistant professors Mariana Bertoni and Zachary Holman. All are on the faculty of the School of Electrical, Computer and Energy Engineering, one of ASU’s Ira A. Fulton Schools of Engineering. 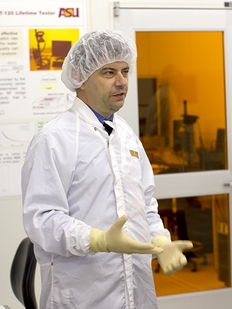 ASU associate research professor Stuart Bowden is the lead investigator on a project supported by the Department of Energy to increase the efficiency of solar cells. Photo by: Jessica Hochreiter/ASU

The ASU-led endeavor will be an affiliate project of the Quantum Energy and Sustainable Solar Technology (QESST) Engineering Research Center at ASU. The center, supported by the National Science Foundation and the Department of Energy, focuses on solving challenges to harnessing solar power in more technologically effective and economically viable ways.

QESST is a big part of the “critical mass” of engineers and scientists in energy-related fields that has formed at ASU over the past decade, Bowden says. This depth of expertise has equipped the university to take the lead in efforts such as those being supported by the national SunShot Initiative, he says.