Using ultrasound to deliver power wirelessly, Stanford researchers are working on a new generation of medical devices that would be planted deep inside the body to monitor illness, deliver therapies and relieve pain. 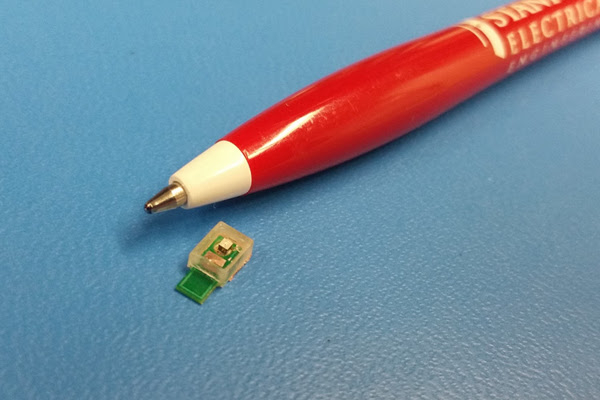 Stanford engineers can already power this prototype medical implant chip without wires by using ultrasound. Now they want to make it much smaller. (Arbabian Lab / Stanford School of Engineering)

Medical researchers would like to plant tiny electronic devices deep inside our bodies to monitor biological processes and deliver pinpoint therapies to treat illness or relieve pain.

But so far engineers have been unable to make such devices small and useful enough. Providing electric power to medical implants has been one stumbling block. Using wires or batteries to deliver power tends to make implants too big, too clumsy – or both.

Now, Stanford engineers are developing a way to send power – safely and wirelessly – to "smart chips" programmed to perform medical tasks and report back the results.

Their approach involves beaming ultrasound at a tiny device inside the body designed to do three things: convert the incoming sound waves into electricity; process and execute medical commands; and report the completed activity via a tiny built-in radio antenna.

"We think this will enable researchers to develop a new generation of tiny implants designed for a wide array of medical applications," said Amin Arbabian, an assistant professor of electrical engineering at Stanford.

The researchers chose ultrasound to deliver wireless power to their medical implants because it has been safely used in many applications, such as fetal imaging, and can provide sufficient power to implants a millimeter or less in size.

Now Arbabian and his colleagues are collaborating with other researchers to develop sound-powered implants for a variety of medical applications, from studying the nervous system to treating the symptoms of Parkinson's disease.

“Tiny, wireless nodes such as these have the potential to become a key tool for addressing neurological disorders,” said Florian Solzbacher, a professor of electrical and computer engineering at the University of Utah and director of its Center for Engineering Innovation.

The Stanford medical implant chip is powered by "piezoelectricity," a word that means electricity caused by pressure.

Every time a piezoelectric structure is compressed and decompressed a small electrical charge is created. The Stanford team created pressure by aiming ultrasound waves at a tiny piece of piezoelectric material mounted on the device.

"The implant is like an electrical spring that compresses and decompresses a million times a second, providing electrical charge to the chip," said Marcus Weber, who worked on the team with fellow graduate students Jayant Charthad and Ting Chia Chang.

The piezoelectric effect is the power delivery mechanism. In the future, the team plans to extend the capabilities of the implant chip to perform medical tasks, such as running sensors or delivering therapeutic jolts of electricity right where a patient feels pain.

Finally, the "smart chip" contains a radio antenna to beam back sensor readings or signal the completion of its therapeutic task.

The current prototype is the size of the head of a ballpoint pen. In order to design a next-generation implant one-tenth that size, team members have enlisted two additional Stanford colleagues who are experts in ultrasonics: Butrus (Pierre) Khuri-Yakub, a research professor of electrical engineering, and Amin Nikoozadeh, a research associate with the E.L. Ginzton Laboratory. The goal is to produce smaller devices that could be used to create a network of electrodes to study the brains of experimental animals in ways not currently possible.

"U.S. and European brain initiatives are pushing for a more complete understanding of the central nervous system," Solzbacher said. "This requires being able to interface with cells using arrays of micro implants across the entire 3D structure of the brain."

Arbabian's team wants to test many other applications using this basic technology to wirelessly power small implants deep inside the body.

"Many biosensing and stimulation applications require small, deep medical implants," he said. "We believe our platform provides the recipe for building small devices that can be powered wirelessly and programmed to perform a wide array of tasks."

For more Stanford experts on engineering and other topics, visit Stanford Experts.