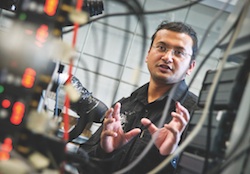 A University of Texas at Arlington physics team is using their expertise in the field of optics and photonics to advance new methods in areas such as mapping the neural circuitry of the brain and guiding neurons to potentially repair damage in the body.

Samarendra Mohanty, an assistant professor of physics, leads the Biophysics and Physiology Lab in the UT Arlington College of Science. He is co-author on two papers published this month. In one published by the online journal PLOS ONE Nov. 10, researchers in Mohanty’s lab described using a method called “two-photon optogenetic stimulation” to carry out in-depth optogenetic stimulation of brain neurons in mouse models – a first in vivo, or in the body, example of the technology.

The second paper was published by Nature Scientific Reports this month and details how scientists used weakly-focused, near infrared laser beams to guide axons to form loops on itself, termed as self-fasciculation, in the lab. Axons are the shafts of neurons, on the tips of which connections are made with other neurons or cells.

“Our innovative approach and expertise in the use of optical tools is making it possible for us to construct, manipulate, transform, modulate and even detect structure and function of neural circuits as never before,” said Mohanty. “These publications, along with others this year, chronicle this work and demonstrate the many ways in which our lab is using technical know-how to further research goals.”

Kamal R. Dhakal, a Ph.D. student working in the Mohanty lab is lead author on the PLOS ONE paper, which is called “Non-scanning fiber-optic near infrared beam led two-photon optogenetic stimulation in-vivo.” The research paper describes using near-infrared light delivered by fiber optics to stimulate a light sensitive protein called ChR2 that can be delivered into living cells and neurons.  Last month, Dhakal and Bryan Black in the Mohanty lab reported in Nature Scientific Reports the use of near-infrared laser beam to stain neurons with impermeable molecules to visualize neural connectivity.

These technologies would be useful in brain mapping initiatives championed by the scientific community and President Barack Obama. Eventually, researchers hope more knowledge about neural circuitry in the brain could lead to new treatments for conditions such as chronic pain and drug addiction.

“Scientists are trying to find out about the connectivity of neuronal circuitry in different regions of the brain, but that information is not sufficient, unless we examine how those connections function. That’s where two-photon optogenetics comes into play,” Dhakal said.

Because the fiber-optic two-photon optogenetic stimulation, or FO-TPOS, uses near infrared light instead of a visible beam, it can surpass the penetration abilities a conventional single-photon beam that uses visible light, Mohanty said. The FO-TPOS also avoids tissue damage that would be caused by using electrical pulses to map circuitry, another previous method.

Other co-authors on the PLOS ONE paper are Mohanty students Ling Gu and Shivaranjani Shivalingaiah; Linda Perrotti, an associate professor of psychology at UT Arlington and her students Torry S. Dennis and Samara A. Morris-Bobzean; and Ting Li, of the University of Electronic Science & Technology of China. The paper is available here: http://www.plosone.org/article/info%3Adoi%2F10.1371%2Fjournal.pone.0111488.

Mohanty said the paper demonstrates the first use of light, or any other method, to achieve looping or bundling of axon on itself.

“Besides its potential impact on medicine, our results disapproves existing biological hypothesis. It has also significant implication on physical properties of axon,” Mohanty said.

Argha Mondal, a visiting student in Mohanty’s lab, is lead author on the new Nature Scientific Reports paper. Other co-authors are Bryan Black, another graduate student, and Young-tae Kim, an associate professor in the UT Arlington College of Engineering Department of Bioengineering. It is available here: http://www.nature.com/srep/2014/141107/srep06902/full/srep06902.html.