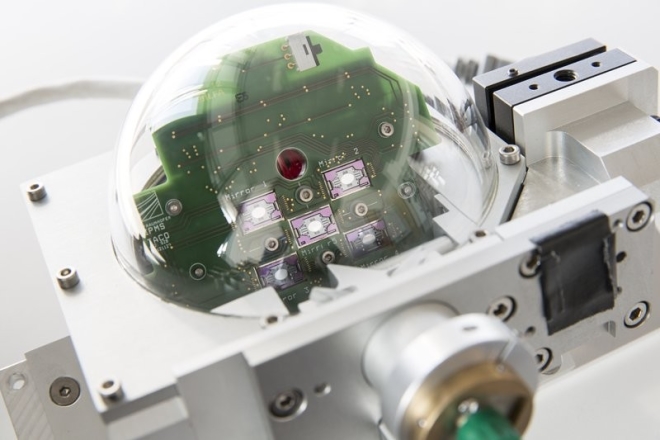 For three-and-a-half years, five research institutions and two industrial companies have been working with in the scope of the European joint research project »TACO« on the development of a new kind of 3D-camera system that should allow robots to perform more demanding tasks. The Fraunhofer Institute for Photonic Microsystems IPMS in Dresden hereby contributed a novel MEMS scan technology as a key hardware component. This allows »relevant« objects in the surroundings to be detected with a higher resolution, similar to human vision , without having to increase the volume of data. At the Photonics West in San Francisco from the fourth to the sixth of February 2014, the Fraunhofer IPMS will be presenting the complete camera system for the first time as a fully-functional prototype to a broad professional public.

Differentiate between colors and brightnesses, judge distances, identify objects and movements in our surroundings in 3D and in a matter of seconds. Things that are easy for humans thanks to our eyes and brain pose a big problem for machines. Because robots lack either spatial information that is resolved in real-time or the necessary focus for artificial, three-dimensional seeing, or because too much image information is recorded to be processed quickly enough to be translated into actions, it has only been possible to develop relatively rudimentary robots up to now that are only able to perform services such as cleaning, building, servicing, security or personal care tasks. But things don't have to stay that way, believe researchers at the Fraunhofer Institute for Photonic Microsystems IPMS in Dresden. The scientists have developed an extremely compact scanning technology (»LinScan«) for ToF (time of flight ) telemeter systems based on production methods from microsystems technology that allows a three-dimensional image acquisition with a flexible scanning rate and thus scanning with an adapted resolution. 3D camera systems equipped with LinScan could enable future generations of robots to roughly search their surroundings for objects that appear in their visual field and to only resolve the objects they are looking for at a higher accuracy. The robot would work with a relatively small volume of data and would still be able to gain a better understanding of its surroundings so as to better interact with everyday objects and our environment.

A precondition for the realization of this so-called principle of foveation is, however, that the robot knows what it is looking for and that it is also able to identify and interpret the objects being sought in a matter of seconds. Apart from the hardware (eye) it also needs corresponding image analysis software algorithms (brain). What's more, the robot should also be equipped with image sensors and software for three-dimensional seeing to gain a spatial idea of its surroundings and thus be able to navigate to objects precisely. In order to satisfy all of these requirements, the Fraunhofer IPMS worked within the scope of the European joint research project »TACO« – Three dimensional Adaptive Camera with Object Detection and Foveation together with four other research institutions and two industrial companies on the development of a novel adaptive camera system. The heart of the system is an optical scanner with five synchronously operated LinScan mirrors from the Fraunhofer IPMS. The MEMS scanner array guarantees the necessary receiving aperture for the Time of Flight (TOF) telemeter system of effectively 5mm and was designed for an adaptive 3D-camera system with an optical scanning range of at least 40° x 60°, 1 MVoxel/s measuring rate of the TOF telemeter system with a 3 mm measuring uncertainty at a measuring distance of 7.5 m. The quasi-static drive of the microscanner allows a line-by-line image formation with a variable refresh rate of <1 - 100 Hz, whereby the vertical measuring point density in the relevant image section can be locally increased by reducing the scanning rate. The horizontal image acquisition by means of the gimbal-mounted 1.6 kHz resonant micro-mirror guarantees a larger receiving aperture compared to a 2D-quasi-static drive and thus a higher resolution of the TOF telemetry with a simultaneous larger optical scanning angle of up to 80°.

The TACO project was recently concluded with the development of a fully-functional complete system. This prototype will be presented to a professional public for the first time at the trade fair booth of the Fraunhofer IPMS number 4407 at the Photonics West trade fair in San Francisco between the fourth and sixth of February 2014. MEMS scan technologies from the Fraunhofer IPMS are also the subject of a paper at the parallel symposium 8977. The senior scientist Dr. Thilo Sandner will be talking about »Micro-scanning mirrors for high-power laser applications«.

TACO (Three-dimensional Adaptive Camera with Object detection and foveation) is a research project co-financed by the European Union within the scope of the 7th general program. The project was launched in the first quarter of 2010 under the leadership of Technikon Forschungsgesellschaft mbH with a term of 36 months.