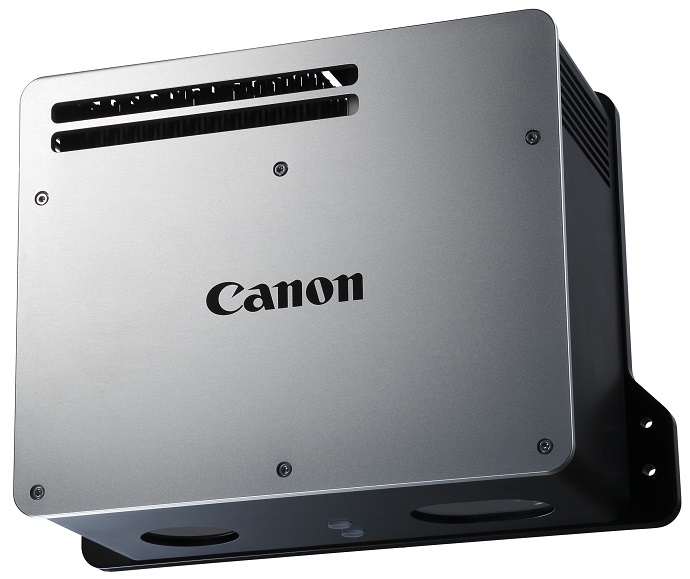 TOKYO, April 21, 2014—Canon Inc. and Canon Marketing Japan Inc. announced today Canon’s entry into the growing machine vision market with the launch in Japan of the RV1100 3-D Machine Vision System, capable of the high-speed, high-accuracy three-dimensional recognition of objects. By using the system in combination with a robotic arm, it can contribute to increased production efficiencies in factories by facilitating the automatic high-speed supply of parts to production lines.

Enabling a robotic arm to accurately and successively recognize and pick up individual items from a randomly assembled pile of parts requires a system capable of the three-dimensional recognition of the shapes of the parts. The RV1100 comprises the 3-D machine vision head, which encompasses the system sensor, and 3-D machine vision recognition software, responsible for recognition processing. The high-speed, high-accuracy three-dimensional object recognition capabilities of the new machine vision system were made possible by applying Canon’s image-recognition and information-processing technologies, which were cultivated through the Company’s research and development of cameras and business machines. As a result, the RV1100 contributes to boosting productivity by enabling the automation and speeding-up of parts supplies to production lines.

Registering the data for designated parts to be picked up by the robotic arm is a simple procedure requiring just the input of CAD data and the capture of five images of the parts arranged in different randomly assembled piles. Since no complicated programming is necessary, users can easily re-register parts data in accordance with changes in the type and shape of parts to be supplied.

Because the RV1100 alone is capable of instantaneously measuring the location and orientation of designated parts in three dimensions, there is no need for 2-D vision sensors to determine the positioning of parts or for a table on which to temporarily place parts during the parts-supply process. Accordingly, the Canon 3-D Machine Vision System makes possible the simple construction of production lines for parts provision while boosting the speed with which parts can be fed to the line.