Capturing light from a single photon

An international team of researchers reports in Science having been able to achieve a new way to detect a single photon with the help of 2D materials. 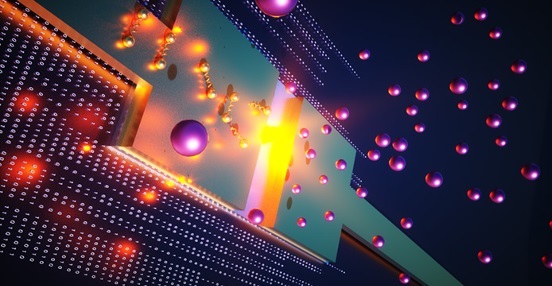 Image Description: This illustration depicts a newly developed component, known as a Josephson junction that can detect a single photon of light. The research, led by Raytheon Intelligence & Space, has potential applications for sensors, communications and quantum computers. Image credit: ©Raytheon

An international team of scientists from Raytheon BBN Technologies, MIT, Harvard University, Pohang University of Science and Technology, ICFO with the participation of researcher Prof. Dima Efetov, and the Japanese NIMS, have developed a new way to detect a single photon, or particle of light – an achievement of much interest for applications in the field of sensors, communications and exponentially more powerful quantum computer processors.

The team has published its work, which centers on the use of a component called a Josephson junction, in the academic journal Science. The discovery builds on the same team’s previous research into a microwave radiation detector 100,000 times more sensitive than existing systems.

Kin Chung Fong, from Raytheon BBN Technologies and lead scientist of the work, states, “A Josephson junction in quantum computing is analogous to a transistor for modern electronics, so they are super important. Our new device enables this basic unit in quantum computing to communicate through as little as one photon. It will improve the speed in the communication and can make quantum networking and sensing possible.”

Quantum computers are becoming a reality, seeking to unlock the promise of faster processing and overcoming the current limitations that classical computers are facing. So far, we are aware that quantum computers in theory are much better are solving unique optimization problems, but there are technical limitation that need to be resolved to consider them more powerful. An example of this is the background noise that causes qubits to lose memory, creating errors in the processing. While other researchers see the noise as problem, the team of scientists have looked into this issue as an opportunity.

The method they used works more or less like a highway, where superconducting charges play the role of cars. In principle, they can move very fast without bumping into each other. Background noise is like a broken-down car in the center lane – it breaks the flow of traffic. This jamming of the lane could hinder the data transmission, but this same phenomenon could be used to detect a single photon using a graphene-based Josephson junction device, and allows the traffic of information to continue flowing. That way, there is no leak in the transmission of data, which permits the continuous communication between superconducting-based supercomputers and quantum computers at a very high-speed.

The results of this work show that this discovery could definitely be the key to enabling a high-speed, low-power optical interconnect for future superconducting computing architectures, searching to scale the system from one device to multiple devices in parallel or interconnect amongst each others.

Image Description: This illustration depicts a newly developed component, known as a Josephson junction that can detect a single photon of light. The research, led by Raytheon Intelligence & Space, has potential applications for sensors, communications and quantum computers. Image credit: ©Raytheon