A study by ICFO, UAM, and UAB researchers reports novel approach by using an atomic quantum simulator of twisted bilayers without actually twisting the layers. 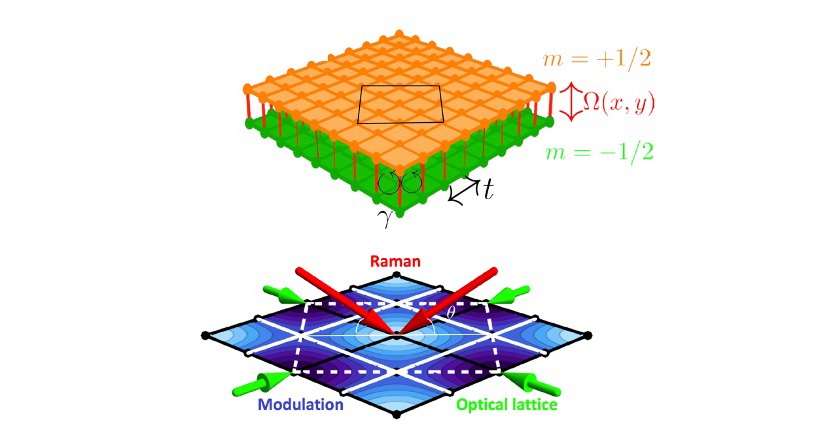 The discovery of flat-bands in magic angle graphene has established a whole new concept - twistronics - which allows to induce strong correlation effects, anomalous superconductivity, magnetism and topology. The creation of this entirely novel field opens entirely new possibilities as well as previously unreachable degrees of manipulation and generation of the quantum many body states. Not only has it far reaching implications in the fundamental understanding of these exotic phases, but it is also likely to make far-reaching changes in technology, for instance in the fields of quantum metrology and sensing. The recent online symposium “EMERGENT PHENOMENA IN MOIRÉ MATERIALS”, organized by ICFO and MIT (http://frontiers.icfo.eu/) illustrated perfectly the enormous interest and progress in this area.

The interesting phenomenology of twisted materials is apparently related to the formation of moiré patterns around small twist angles. Some of these twisting angles, the so-called magic angles, lead to vast band flattening already at the single-particle level. The geometrical moiré patterns induce spatially varying interlayer couplings that are behind the strong modification of the band structure.

Emulating this physics beyond materials research can help in the identification of key minimal ingredients that give rise to the phenomenology of Twisted Bi-layer Graphene -TBLG, while also providing additional microscopic control. Photonic systems, for example, are well suited to explore this physics at the single-particle level as shown in a recent paper by ICFO Director Lluis Torner and his collaborators reporting on an experimental investigation of single-particle transport in a tunable photonic moiré lattice.

Ultracold atoms in optical lattices are, in principle, a very promising platform to experimentally explore also the corresponding emerging many body phenomena. A challenging question is how to engineer such moiré-like optical lattice potentials. ICFO researchers Tymoteusz Salamon, Irénée Frérot, led by Debraj Rakshit and ICREA Prof. at ICFO Maciej Lewenstein, together with ICFO Prof. Leticia Tarruell, Ravi Chhajlany (UAM, Poland) and Alessio Celi (UAB) propose in a recent letter, published in Physical Review Letters, an atomic quantum simulator of twisted bilayers without actual physical twisting between layers. The idea is to elegantly employ another “specialité de la maison”: synthetic dimensions. Atoms are located in a single 2D lattice, but can occupy two internal states, mimicking two layers. Coupling between the layers is realized by Raman transitions that are spatially modulated so as to mimic the action of twists, or in general arbitrary desired moiré patterns.

The advantages of this scheme are clear:

i) Control of interlayer tunneling strength over wide ranges:
ii) Control of atom-atom interaction, so that the ratio of kinetic-to-interaction energy can be tuned over wide ranges;
iii) magic angle physics appears at “larger angles” with smaller moiré supercells, implying less fluctuations of the “twisting angle”.

The team of researchers hopes that this scheme can soon bring twistronics to the setting of ultracold atoms in optical lattices.