A Toast to Laser Glass Cutting

Wine glasses have been in use literally for millennia, and most people would hardly consider them a “high technology” item. But, iPROTec (Innovative Process Technology) GmbH, a company that designs and builds machines for drinking glass production, developed and now offers one of the most sophisticated laser materials processing methods available in their automated systems for removal of the moil of drinking glasses. Specifically, they utilize an ultrashort pulse (USP) laser from Coherent to perform SmartCleave cutting, which delivers superior results, reduced costs, and more environmentally friendly manufacturing.

iPROTec (Zwiesel, Germany) was originally founded in 2006, and was subsequently acquired by the owners of Zwiesel Kristallglas AG in 2011. The three sister companies – Zwiesel Kristallglas AG, Ullrich GmbH, and iPROTec GmbH – are all at the same location. iPROTec now employs over 160 workers. The primary focus at iPROTec is automated equipment for drinking glass production, and they are the only company offering machines that address every step in the production process (feeding, pressing, blow molding, fusing, separating, mouth rim polishing, testing, laser marking, packing, etc.) for hollow glasses. Additionally, iPROTec services the automotive industry with assembly, gluing, testing, welding, and other systems, and manufactures a variety of other specialized production equipment to specific customer requirements. Having their own design, purchasing, electrical, manufacturing and assembly department ensures high flexibility and perfect customer service.

iPROTec employs a holistic approach to machine development, striving to engineer and deliver systems that integrate seamlessly into their customers’ existing production setting. A major focus of their efforts is reducing production costs while simultaneously improving quality and yields. Introducing manufacturing processes which protect the environment is also a core value for the organization.

The drawing shows a highly simplified schematic of wine glass production. A droplet of molten glass is put into a form, and air is blown into the droplet to make it expand and fill the form.

The glass cools in the desired hollow bowl shape, but also has a “cap” (the so-called moil) of material at the top. This cap is useful because it enables the glass to be handled and held during subsequent production stages, such as attachment of the stem and base, but eventually it must be removed. The edge where this cap is removed from ultimately constitutes the rim of the finished glass; and, since this is where the drinker’s lips touch the glass, smoothness of this cut edge is of primary importance. 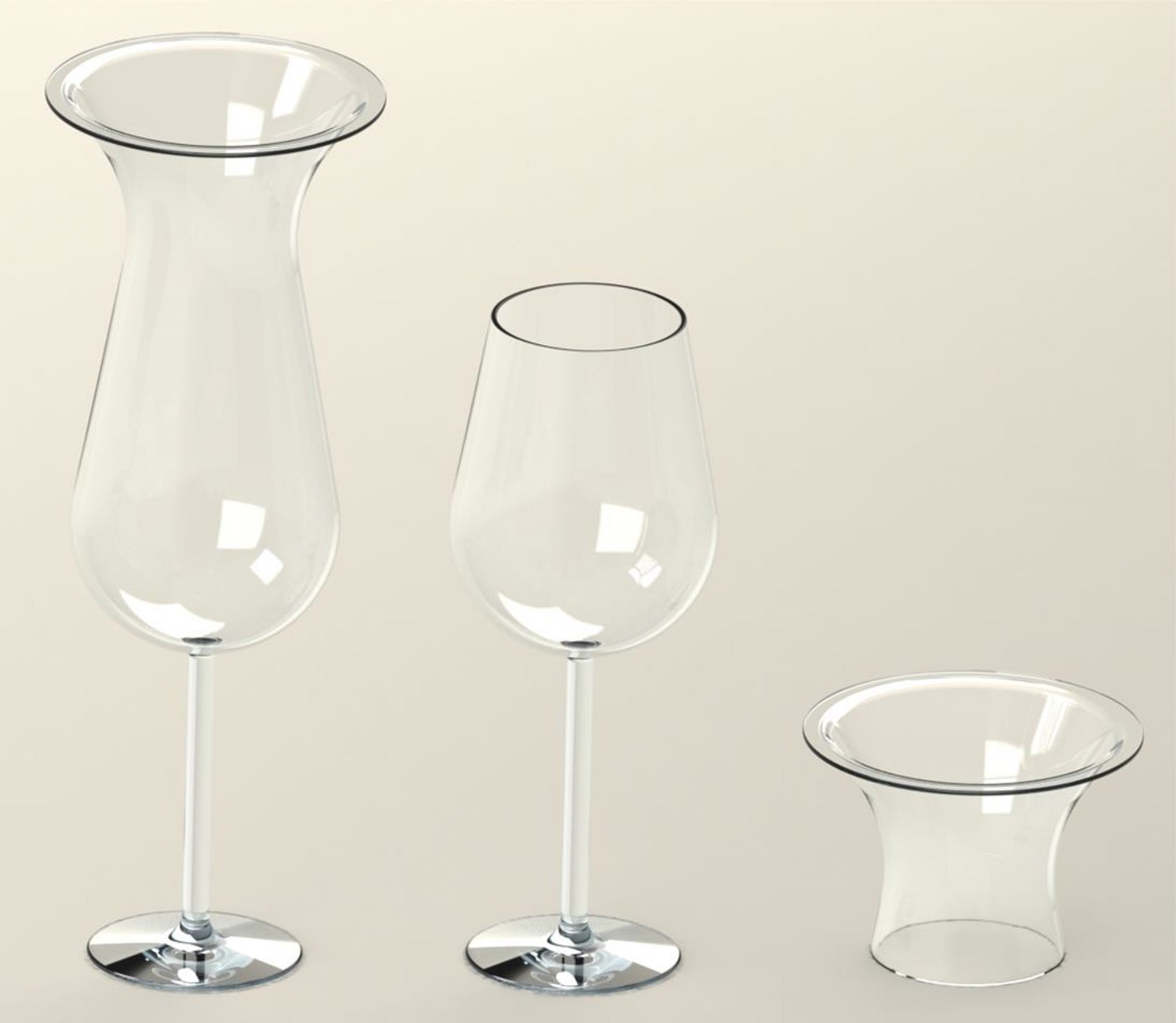 Figure 2: Wine glass before and after cap removal.

The technologies conventionally used for removing the cap (moil) can be split into two main groups – that is, cap removal from hot or cold glasses. The cap can be cut off by heating the glass, or by scribing the mouth rim and the use of thermal shock. For the latter, the cap is then subsequently removed by applying mechanical force, either through a blast of air or physical contact.

More recently, the use of a flame for heating has been replaced by heating induced using a CO 2 laser. A step after this to physically remove the cap is also required with this method.

In many cases cutting methods produce a different quality than required for the finished part. Often various post processing steps have to be used, such as mechanical grinding and flame polishing, to achieve the desired surface quality. Obviously, these processes require additional time and cost. Plus, grinding requires water and creates glass debris, both of which have environmental impacts; the glasses must then be dried, which also requires energy consumption. And, the use of mechanical force on the glass during grinding can cause breakage. Finally, since there are unit-to-unit variations in glass thickness, these cutting processes aren’t entirely repeatable.

“Filamentation” is an alternative glass cutting method to bulk heating (using a flame or CO 2 laser) that exploits the very high-power densities that can be achieved with focused, ultra-short pulse lasers of even modest overall power. Coherent’s tradename for their patented version of this energy-efficient process is SmartCleave. Specifically, it enables high-speed cutting of straight lines, curves, and insets, without taper, into transparent and brittle materials from 50µm to 10 mm in thickness. SmartCleave also delivers smooth surfaces, with a roughness (R a ) of less than 1 μm and with edge chip sizes less than 5 μm. Importantly, the process results in a final bend strength that is measurably superior to mechanical processes, which has made it particularly attractive to touchscreen manufacturers.

In the context of wine glass cap removal, SmartCleave addresses virtually all of the drawbacks of flame or CO 2 laser cutting. Specifically, it applies laser energy in such a spatially precise and limited manner that there is no bulk heating of the glass, and therefore, no thermal damage to the material. It creates an extremely smooth edge, with no burrs, cracks or breakouts, which completely eliminates the need for subsequent processing. Thus, all the additional grinding, washing, and drying steps, along with their energy consumption, time, cost, and negative environmental impact, are absent (no dust and precipitation on the glasses). SmartCleave increases yields, improves quality and lowers production costs.

To accomplish filamentation cutting, the output of an ultrashort pulse (< 15 picoseconds) laser is focused to a small spot within the substrate. The very high laser intensity achieved produces self-focusing of the beam (due to the Kerr optical effect) within the glass. This self-focusing further increases power density, until, at a certain threshold, a low-density plasma is created in the material. This plasma lowers the material refractive index in the center of the beam path and causes the beam to defocus. If the beam focusing optics are properly configured, this focusing/defocusing effect can be balanced to repeat periodically and self-sustain. This forms a stable filament, that is, a line of tiny voids, which extends over several millimeters in depth into the glass. The typical filament diameter is in the range of 0.5 µm to 1 μm. 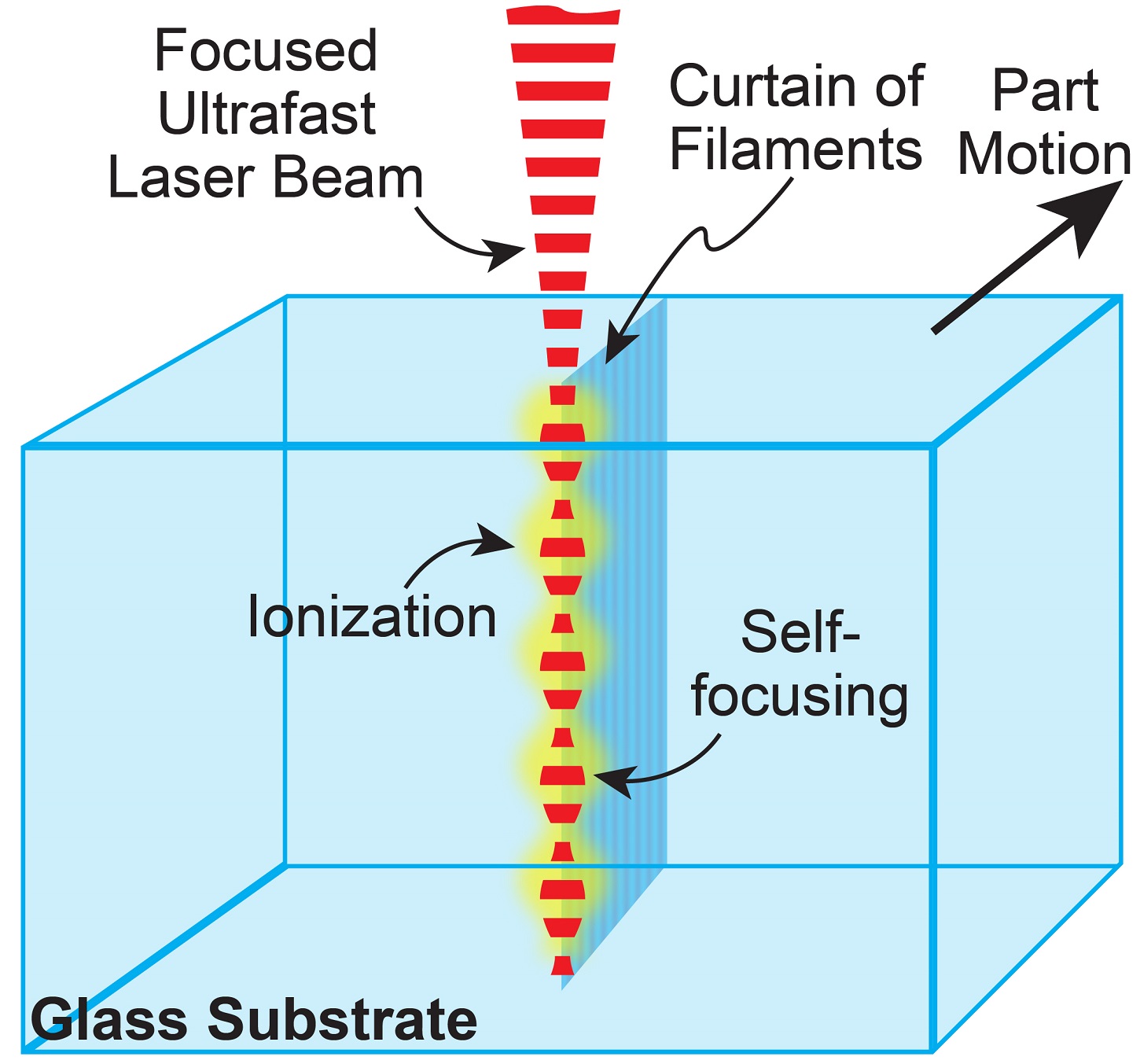 Figure 3: Schematic of the filamentation process which involves periodic self-focusing of an ultra-short pulse laser beam. Relative movement between laser beam and work piece creates a line or “curtain” of these filaments with 3 µm to 7 µm spacing. The filaments weaken the material and enable a clean separation.

In order to make a cut, the substrate is moved relative to the beam to create a series of these closely spaced, laser-generated filaments. Motion speeds of 100 mm/s to 2 m/s can be utilized, depending on the material thickness and the desired cut geometry. With chemically or thermally strengthened glass, internal stress within the part then causes spontaneous separation, without an additional step. For non-strengthened glasses and other transparent materials (such as sapphire), a separation step must follow SmartCleave. This can be accomplished with either a small mechanical or thermal force. For example, the latter is often achieved by heating with a CO 2 or CO laser or flame.

One key factor in the practical implementation of SmartCleave cutting is the use of a USP laser which provides so-called “burst mode” operation, such as the Coherent HyperRapid NX. In burst mode, the laser provides a series of closely (temporally) spaced pulses. If the timing between subsequent pulses in the burst is shorter than the thermal diffusion time of the material, then heat builds up in the substrate which increases the glass ductility. This produces a more gentle (and therefore lower stress) localized heating profile than a string of pulses with equivalent energy, delivered over a longer period. This gentler heating cycle produces several important benefits. First, it increases cutting speed by as much as a factor of two. Next, it produces holes which are smoother and straighter than achieved with single pulse filamentation cutting. Also, it essentially eliminates the formation of microcracks on the sides of the holes. This is important because microcracks can significantly lower glass strength.

IPROTec designed and now supplies a fully automated system which implements SmartCleave cutting for glass cap removal. It utilizes a Coherent PowerLine® SmartCleave sub-system, which incorporates a single HyperRapid NX laser having 50 W of average output power at a wavelength of 1064 nm. The sub-system also includes several optical components, beam switches, sensors, and electronics. All managed by Coherent’s laser controller, including a laser safety concept that can easily be integrated into the machine safety concept of the IPROTec system. Depending upon how the machine is configured and used, it can process up to 80 glasses per minute.

The IPROTec system is the first drinking glass cutting equipment available to employ SmartCleave technology, and gives the company an advantage because it enables their customers to lower their energy consumption, while also improving yields and reducing scrap. The system has already proven itself in actual use to deliver the 24/7 reliability required by high volume drinking glass manufacturers. 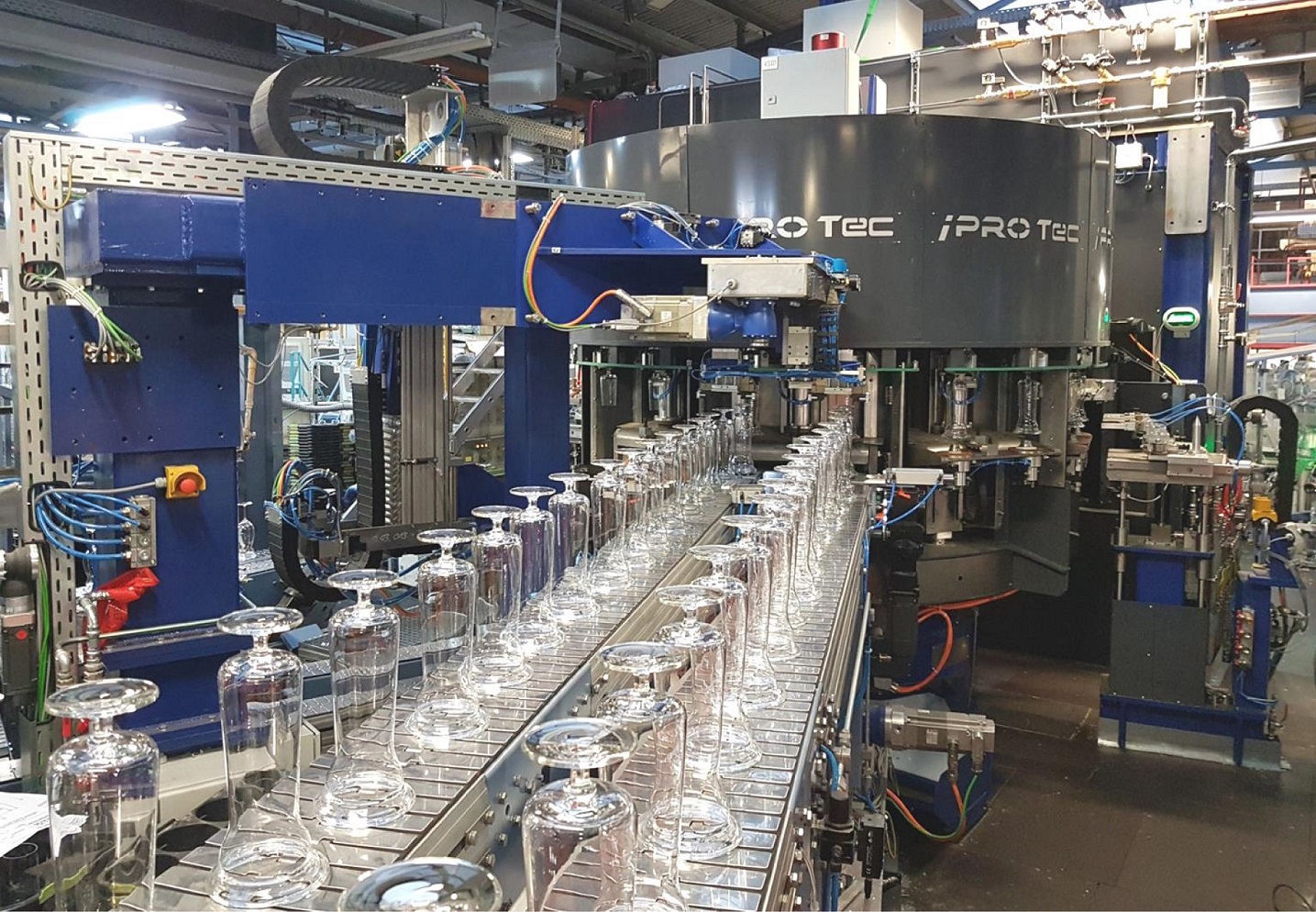 Figure 5: The IPROTec system is a fully automated machine for performing wine glass cap removal using SmartCleave at rates of up to 80 pieces/minute.

“Early on in the development of our current systems for glass cap removal, we identified SmartCleave cutting as offering tremendous benefits for our end users,” notes Tobias Bredl, Project Manager at IPROTec. “A major reason that we selected Coherent as our laser sub-system supplier was that they were ready and able to partner with us in the development of the process and technology. This is particularly important to us when first implementing a new technology that we’re not familiar with. We didn’t want to have to become laser experts to take advantage of SmartCleave, so Coherent’s willingness to get involved and lend their knowledge and product solutions to reduce our time to market and to lower our overall development costs. Plus, we liked their HyperRapid NX laser for several reasons. It implements burst mode very effectively, and has well-proven reliability. Also, the compact design of the HyperRapid NX makes integration into our machines easy. Plus, Coherent lasers and sub-systems are backed by a strong, global service infrastructure. That’s important to us, because we send our systems all over the world.”

In conclusion, IPROTec’s ability to provide a superior high-tech solution to a centuries old, low-tech task shows how the unique processing abilities of USP lasers can revolutionize even traditional industries. This serves as an example of how Coherent’s Industrial Revolution in Ultrafast Science extends far beyond the laser laboratory to sophisticated processes for making smartphone displays, as well as volume production of the humble wine glass – one of the oldest consumer products used by humankind.