The Z3D’s unique and captivating visual appearance (think holograms from science fiction) in true 3D, has added a whole new dimension to gaming. 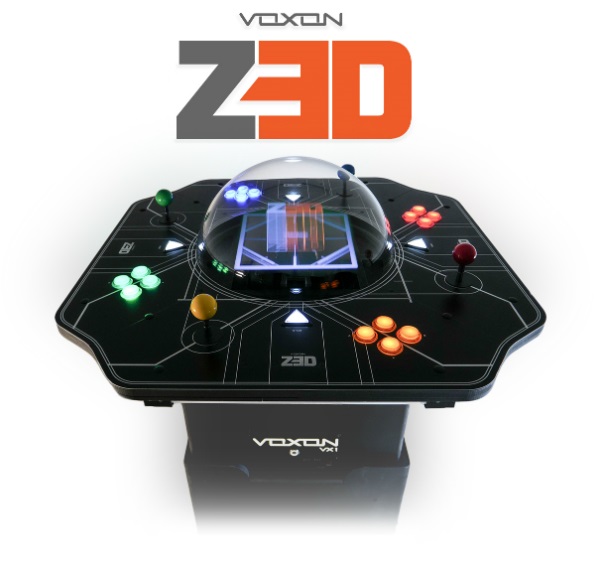 Adelaide, Australia - 26 June 2019 Following on from the successful release of the world’s most advanced 3D volumetric display, the VX1 and after a successful debut at the Tokyo Game Show 2018, the world will now be able to purchase the Voxon Z3D.

A New Dimension in Gaming

The Z3D’s unique and captivating visual appearance (think holograms from science fiction) in true 3D, has taken what has only previously been imagined and brought it to life. Voxon’s Z3D has now added a whole new dimension to gaming.

Will Tamblyn, Voxon Photonics CEO and Co-Founder, said of the announcement, “We knew we had a real wow factor product in the VX1 volumetric display, but when combining this with the social aspect of multi player gaming and the retro-futuristic arcade form factor, the Z3D now allows us to deliver a whole new dimension in gaming.”

The ‘Z’ part of the name is really referring to the z-axis. It’s no longer just x and y axis two dimensional gaming. We can now create games in a true 3D volumetric form which can be viewed by a number of people, from any angle, without the need for headsets or glasses. This allows us to make some of the old classics new again, create your own games, or use new volumetric video technology.”

“It’s inspiring and exhilarating to create something new, to do what others thought couldn’t be done. This is just the start of our journey with volumetric display technology, but making a 3D holographic arcade machine, is a fun way to start sharing it with the world.”

Voxon plans to both sell the Z3D directly to consumers globally as well as partner with distribution companies within the gaming industry worldwide.

The Z3D is a swept surface volumetric display, and is powered by the Voxon Photonics Engine. This engine comprises an ultra-high-speed digital projection system, CPU, volumetric graphics engine and reciprocating light diffuser. Volumetric images are created by projecting slices of light at 4,000 frames per second onto a moving screen. The images diffuse at precisely the right position in physical space, and through persistence of vision, the human eye blends them together, resulting in true three-dimensional digital objects that can be viewed in the same way as one would view a real object, from any angle, and without special goggles or glasses. The Z3D supports multi-user interactivity for gaming and other interactive applications.