Have researchers discovered the sound of the stars? 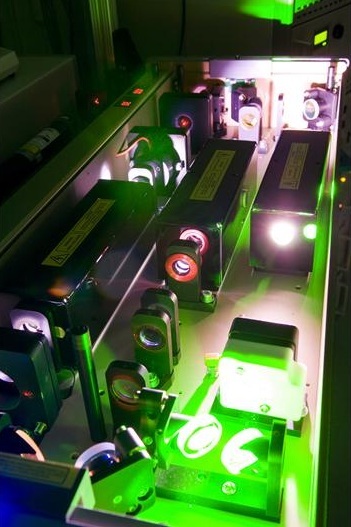 A shot of the laser equipment at the Tata Institute for Fundamental Research where the work was done.

A chance discovery by a team of researchers, including a University of York scientist, has provided experimental evidence that stars may generate sound.

The study of fluids in motion – now known as hydrodynamics – goes back to the Egyptians, so it is not often that new discoveries are made. However when examining the interaction of an ultra-intense laser with a plasma target, the team observed something unexpected.

Scientists including Dr John Pasley, of the York Plasma Institute in the Department of Physics at York, realised that in the trillionth of a second after the laser strikes, plasma flowed rapidly from areas of high density to more stagnant regions of low density, in such a way that it created something like a traffic jam. Plasma piled up at the interface between the high and low density regions, generating a series of pressure pulses: a sound wave.

Dr Pasley, who worked with scientists from the Tata Institute of Fundamental Research in Mumbai, India, and the Science and Technology Facilities Council’s Central Laser Facility in Oxfordshire, said: “One of the few locations in nature where we believe this effect would occur is at the surface of stars. When they are accumulating new material stars could generate sound in a very similar manner to that which we observed in the laboratory – so the stars might be singing – but, since sound cannot propagate through the vacuum of space, no-one can hear them.”

The technique used to observe the sound waves in the laboratory works very much like a police speed camera. It allows the scientists to accurately measure how fluid is moving at the point that is struck by the laser on timescales of less than a trillionth of a second.

Dr Alex Robinson from the Plasma Physics Group at STFC’s Central Laser Facility developed a numerical model to generate acoustic waves for the experiment. He said, “It was initially hard to determine the origin of the acoustic signals, but our model produced results that compared favourably with the wavelength shifts observed in the experiment. This showed that we had discovered a new way of generating sound from fluid flows. Similar situations could occur in plasma flowing around stars”

The research was funded by the Engineering and Physical Sciences Research Council and the Tata Institute of Fundamental Research. It is published in Physical Review Letters.